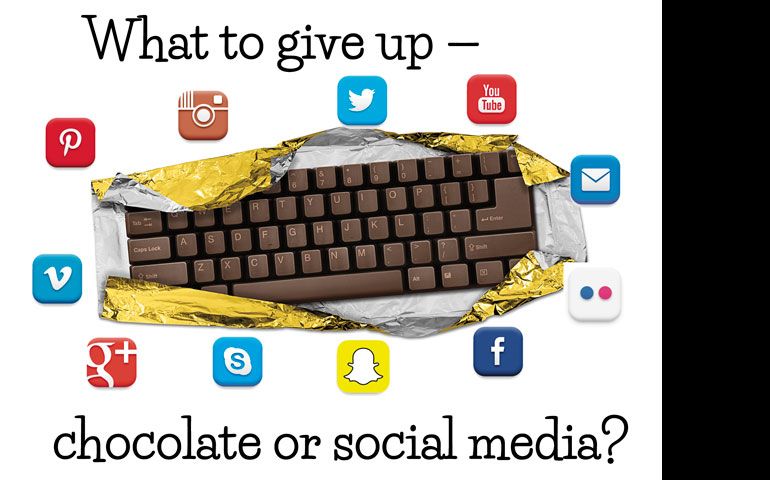 It's that time of year again, when friends, family and acquaintances craft beautifully written goodbyes as they announce their plans to fast from social media for Lent. These announcements are made, without even a hint of irony, of course, on social media.

Not me. I've yet to give up Facebook, Instagram or Twitter for Lent, for a number of reasons. On a practical level, keeping up with and sharing religion-related news is part of my job as a columnist and religion writer -- and much of that happens on social media.

I also prefer to "do" something for Lent, rather than "not do" something. In past years, I've committed to 40 days of throwing out or giving away stuff, doing more spiritual reading and participating in a retreat for busy people. The last two -- the reading and the retreat -- were done primarily online.

When I try to "give up" something for Lent, it tends to be something to improve my relationships or deepen my spirituality -- like giving up yelling at my children.

But in refusing to forgo my Facebook feed, I am probably in a shrinking minority -- at least among Catholics on social media. Although I have no hard-and-fast data to prove it, I'll bet Facebook is giving chocolate a run for its money in the "what to give up for Lent" department.

On one hand, I understand the attractiveness of the choice to go Twitter-free for 40 days. Spending time on social media, while enjoyable, is frivolous at best, a time-waster at worst, making it perfect as a potential sacrifice. And if the social media faster replaces time spent online with time spent in prayer or almsgiving, all the better.

Skipping nightly scrolling through silly memes and envy-inducing photos of perfect meals or children can also improve your disposition and relationships -- again, especially if you replace that time with attention to your face-to-face relationships. No giving up YouTube videos, only to replace them with ones on the old-fashioned tube.

Some Catholics use Lent as something of a New Year's resolution do-over, a chance for a commitment to self-improvement, especially if you've failed at your January one by the time Ash Wednesday rolls around. I understand that temptation, though I'm not a fan of Lenten resolutions as self-improvement, since they seem to lack the "dying to self" that the church season focuses on. It's supposed to be penance, not a weight-loss plan.

Still, there's something to be said for discipline, and Lent is a perfect time to practice it. I know someone who once gave up all sugar for Lent, including any added sugar or corn syrup, which is in nearly all processed foods these days. A superwoman of discipline, that woman.

If you've noticed that you get a little twitchy if you haven't checked Instagram in a few hours, then perhaps some practice at letting go might be in order. Anything that can become addictive has the potential to take our attention away from God and is appropriate fodder for sacrifice, in my book. Giving up something we love, even temporarily, reminds us that we can do hard things.

The problem I have with giving up social media for Lent, however, is that it ignores that sometimes social media use is good, in that it brings people together, provides valuable information and even -- dare I say -- can be a spiritual tool.

Communication theorist Marshall McLuhan famously argued that "the medium is the message," noting the importance of form as well as content. The full ramifications of today's technology are not yet known, but certainly we have evidence of some of social media's detrimental effects on individuals, their relationships and society. MIT professor Sherry Turkle argued in her 2011 book Alone Together that all this connection was actually making people lonelier.

Last year, Pope Francis encouraged Catholics to give up something I'm betting was not at the top of many Lenten sacrifice lists: indifference.

"Indifference to our neighbor and to God also represents a real temptation for us Christians. Each year during Lent we need to hear once more the voice of the prophets who cry out and trouble our conscience," he wrote in his 2015 Lenten message.

If giving up social media increases your compassion for people in your family, your neighborhood and the world, then I say, "Do it." Or if it relieves you of "compassion fatigue" so you can return refreshed and ready to listen to the prophets who "trouble our conscience," have at it.

But if leaving social media removes a way for you to connect to others, including learning about the places in the world that need our help, I'd suggest giving up chocolate instead.

Column | Facebook as the new chocolate: Should you give up social media for Lent?

Listen to Jesus: Respond to enemies with love