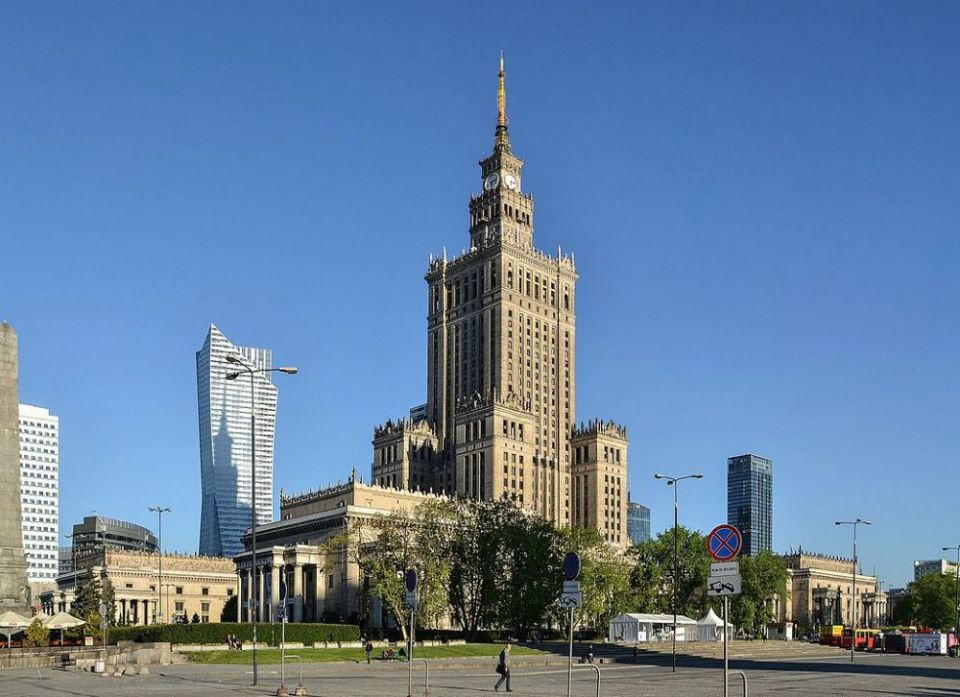 Palace of Culture and Science, Warsaw, Poland, pictured in May 2017 (Wikimedia Commons/Pudelek)

The Polish Congregation of Marian Fathers is once again trying to silence Fr. Adam Boniecki. A gag order, lifted in July, was reinstituted in November.

The 83-year-old Marian priest had been forbidden to speak to media outlets since 2011 when he defended efforts by Poland's liberal, anti-clerical Palikot movement to remove a cross from the Polish parliament's lower house.

He's now banned from media contact because of his eulogy for an anti-government protester. On Oct. 19, Piotr Szczesny, 54, doused his clothes with a flammable liquid and set himself on fire in front of the Palace of Culture in downtown Warsaw, where he was distributing leaflets denouncing the ruling Law and Justice Party for undermining democracy. Szczesny died 10 days later.

"We say goodbye to Piotr, a man who is like a cry that tears up the silence, like a fire which out of darkness brings out the shape of things," said Boniecki at Szczesny's funeral, as reported in Gazeta Wyborcza, Poland's largest newspaper. "He believes he can warn you. He knows he must do it."

The Marian Fathers sanctioned Boniecki for praising Szczesny instead of condemning the act of self-immolation. Fr. Piotr Kieniewicz, spokesman for the Marian Fathers, said Boniecki's words created confusion over the church's moral opposition to suicide.

Kieniewicz also accused Boniecki of supporting the LGBT community, claiming a picture of the priest on an LGBT Facebook site had caused confusion and moral outrage. "The community's activities contradict the church's moral teachings," Kiniewicz said.

Boniecki is revered among Polish liberals.

"Boniecki's gift for communications with people of varied background made him a symbol of the church that would be welcomed even by the nonreligious," said Adam Szostkiewicz, a columnist for the liberal weekly Polityka. "He may be seen as an asset, not a problem for the church in Poland."

Stanislaw Krajewski, a professor of philosophy at Warsaw University and co-chair of the Polish Council of Christians and Jews, praised Boniecki's effort to understand Szczesny's death.

"He did it to protest the dismantling of the democratic infrastructure of the state," said Krajewski in a telephone interview. "To dismiss it with contempt as un-Christian makes so many Poles furious."

"If the charges were scandalous or depraved, he would not be able to preach anymore," said Nosowski. "Since the complaints don't reach that level, I fail to understand why the church took this action."

Although banned from speaking to the media, Boniecki remains as senior editor for the liberal Catholic weekly, Tygodnik Powszechny, for which he writes a column.

Boniecki is an outspoken critic of the close relationship between Poland's ruling right-wing party and the Polish church. He also denounces Poland's anti-immigration policies.

Commenting on the silencing of Boniecki's unswerving liberal voice, Krajewski noted that the conservative, nationalistic wing of the church is stronger than the liberals.

"It actually dominates the church and the nation," he said.

People | Fr. Boniecki told not to talk to media after supporting Polish protestor