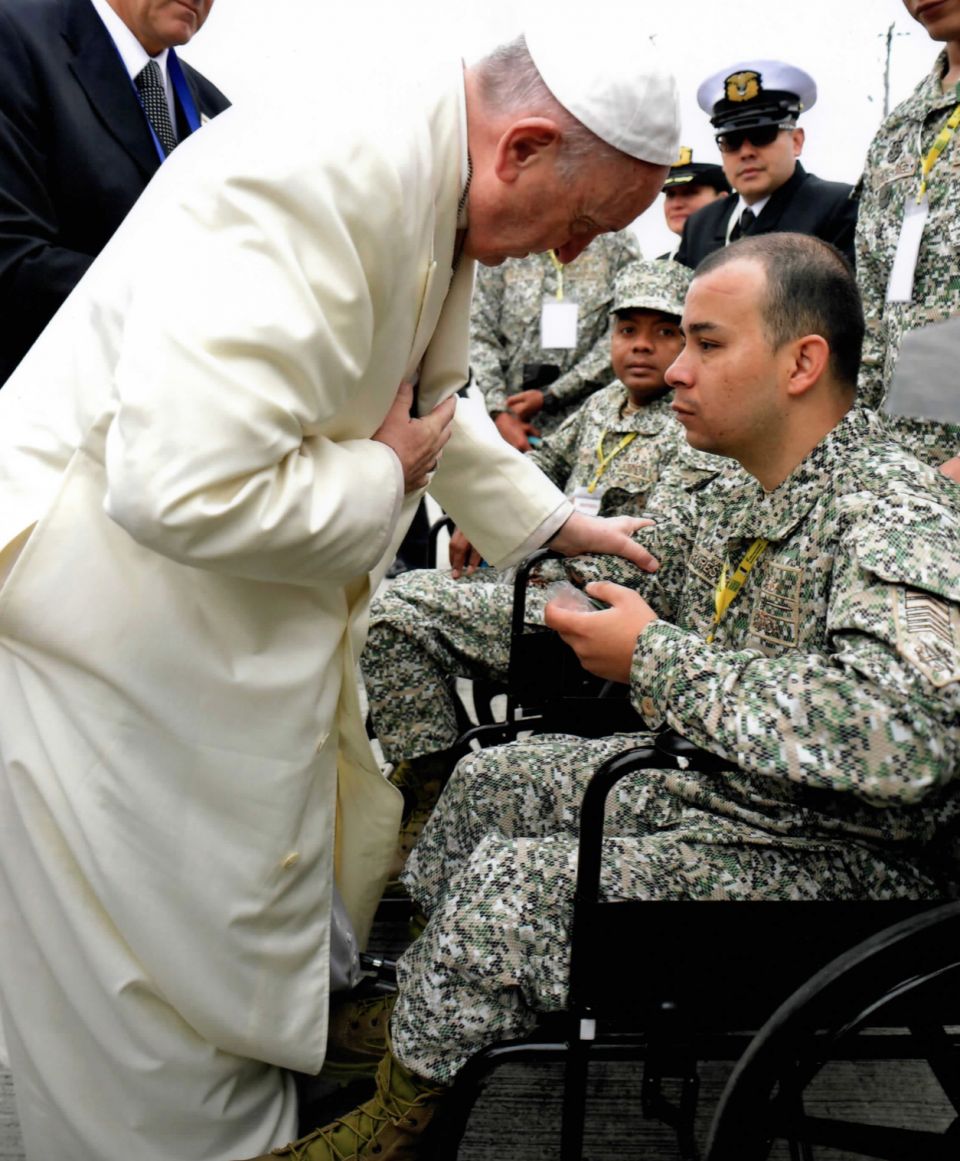 Pope Francis greets Edwin Restrepo, a retired marine, Sept. 8 in Colombia.The pope gave Restrepo a rosary and he gave the pope his hat. Restrepo, who lost his sight during the country's civil war, received a handwritten note from the pontiff Nov. 9. (CNS/courtesy of the Colombian Navy)

Bogota, Columbia — Pope Francis sent a handwritten letter to a Colombian soldier who lost his sight during the country's civil war.

The pope met Edwin Restrepo, a retired marine, during his September visit to Colombia. On Nov. 9, Restrepo received the letter, in which the pope thanked him for his sacrifice during Colombia's armed conflict. The pope also told the veteran he was still holding on to his "touching" gift.

When Francis visited a Colombian airbase in September, he greeted soldiers and police officers maimed during the war. When the pope walked by Restrepo and shook his hand, the marine bent his head forward, asked for the pope's blessing and asked him to take his military cap. Their conversation lasted only a minute.

"He gave me a rosary," Restrepo recalled. "So I told him I wanted to give him something that represents our military forces, and there was nothing better I could think of than my cap."

In his letter, Francis said he held on to the cap during his trip to Colombia because it reminded him of the "sacrifice" and "patriotism" of Colombian soldiers who have fought in the country's recently finished war with Marxist guerrillas. The pope told Restrepo that he now keeps the hat above an altar in his small office in Rome. He provided a picture of the hat and the altar.

"I often pray there," the pope said in his letter. "And every time I do, I pray for you, and for your fallen and injured colleagues."

Restrepo lost his left leg, part of his right hand and his sight in 2004, when he stepped on a land mine during a patrol in rural Colombia. He was only 19 at the time and was completing compulsory military service.

The former marine said he was taken aback with the pope's gesture, especially because he never told the pontiff his name. Francis was able to track Restrepo down though with the help of Colombian church officials.

"I never expected this," Restrepo told Catholic News Service. "I think it is one of the most beautiful gestures that I've experienced."

Restrepo said he will frame the letter and place it in his small studio, along with the rosary that the pope gave him. Though he lost his sight, Restrepo now reads in Braille and is completing a law degree.

"I want to keep helping the members of our military," he said. "There are many who haven't received proper pensions, and I want to litigate on their behalf."