web What a view 3.jpg 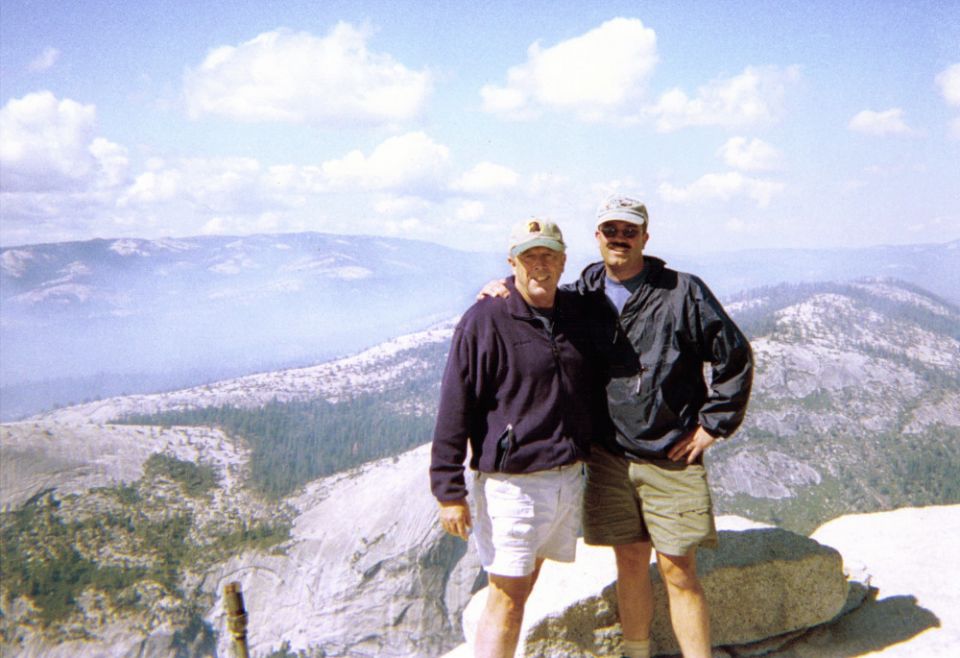 Author Brian Cahill, left, says one of his favorite photos with his late son, John, is this one taken in September 2002, at the top of Half Dome at Yosemite National Park. (Courtesy of Brian Cahill) 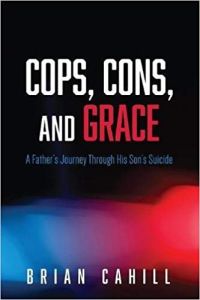 COPS, CONS, AND GRACE: A FATHER'S JOURNEY THROUGH HIS SON'S SUICIDE
By Brian Cahill
176 pages; Published by Resource Publications
$45.00

Cops, Cons, and Grace: A Father's Journey Through His Son's Suicide will save lives.

First and foremost, Brian Cahill's work will save the lives of law enforcement professionals.

In a reader-friendly way, the book incorporates research, background and behavioral studies about suicide within the law enforcement world, and how police communities are coming to grips with how the high-tension realities of their work impact mental health.

Suicide is the leading cause of death for active police. More officers die from suicide than from homicide and duty-related accidents combined, according to Badge of Life, a nonprofit raising consciousness about the issue.

Cops, Cons, and Grace also encourages the loved ones and persons close to suicide victims to face their own resulting trauma and that of those around them.

However, the slim volume is not a white paper on police suicide. At its core it is a revealing, courageous and insightful record of Cahill's soul-fractured life following the suicide of his son, John Francis Cahill.

Over time, his father and family would learn that the charming, respected and well-liked 42-year-old was the embodiment of chilling statistics.

According to Badge of Life, the average age of officers who commit suicide is 42, with an average time on the job of 16 years. More than 90 percent use a firearm.

Cahill brings to this volume a lifetime of work as a social worker. He directed the San Francisco Archdiocese's combined Catholic Charities and Catholic Youth Organization operations for the last several years of his professional life.

Cahill's son, John, joined friends, co-workers, philanthropists and civic leaders to honor Brian at his retirement on Dec. 1, 2008. Brian is confident John delayed ending his life to join him at the event. It was the last time Brian would see John alive.

Cahill's descriptions of his anguish, guilt, despair, confusion, anger and emptiness on losing his son — whom he repeatedly describes as his "rock" — will echo deeply in the hearts of parents who have lost adult children to tragedy, especially self-administered.

Two themes dominate: torment and blame. Two questions snarl around one another: How could this happen? Why didn't this father see it coming and prevent it?

Cahill shares the realities of the family struggles — that he was ill-prepared to be a husband and father when married to John's mother; that John also went through a painful divorce; that Brian and John's ex-wife disdained one another following the suicide; that John's daughter and stepdaughter struggled mightily with their father's choice; that Brian's wife, Donna, battled to keep him alive and sane while dealing with her own grief.

The family does achieve eventual reconciliation.

In spite of the immensity of the loss, Brian and Donna kept daily prayer intact. That is not to say the author does not brawl with God.

In the place Cahill describes as one of "isolation and punishment and suffering," he found compassion and understanding and inspiration.

Cahill had been volunteering there and knew many of the men well.

One Sunday, an inmate named Ron pulled Brian aside. His latest appeal for parole had been denied.

"This time I thought I had a chance," Ron tells Brian.

Ron put his hand on Brian's shoulder. "I'd still like to get out," he said, "but I may not. … I was finally able to say to myself that if it's God will that I live out my life in here, then I'll try to live that life as well as I can, trusting Him and accepting His will."

It is clear to Cahill that "through Ron, God is trying to speak to me, to be present to me, to help me accept my suffering, to help me live out the rest of my life as well as I can."

One marker is Cahill's increasing awareness he should honor his son by helping law enforcement men and women become more aware of the mental health risks inherent in their work.

His grief counselor as well as Sgt. Mary Dunnigan encouraged this. Dunnigan headed the San Francisco Police Department behavioral science unit. She contacted Cahill after reading a commentary he wrote on cops and suicide.

She asked Brian to speak to a group of veteran officers at the police academy in July 2011. Make it clear, she said, that if this can happen to your son, it can happen to any of them.

The audience seemed less than enthusiastic. However, when Brian started by saying his son was a 19-year police veteran who took his own life, cellphones are put down. Chins are raised. Attention is paid.

Brian told them research shows "a good cop is highly functionary in all aspects of his or her life. A good cop is trained to bring control out of chaos. A good cop is willing to risk everything in the critical incident."

As important as these skills are, "they can become lethal when a cop has a personal problem or becomes seriously depressed."

On-duty incidents are normally finite and come to quick resolution. That is not true for marital problems, financial challenges, medical concerns and other issues, Brian told them.

"Depression erodes the cop's sense of self-worth" as he or she realizes one cannot will life's pain under control, Cahill emphasized. They can come to believe they are the problem, that others would be better off without them.

A standalone read is an appendix titled "An Open Letter to All Cops." It drives home that seeking help when one is losing his or her way is not a sign of weakness.

This story appeared in the July 13-26, 2018 print issue under the headline: 'Grace' author shares story of son's suicide .

The moths have eaten me: reflections on failure, faith and grace