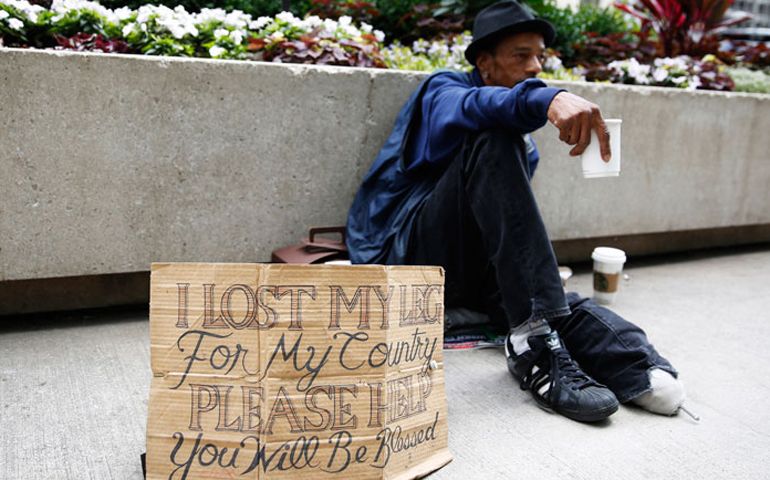 What are they: bromides, slogans, rote chants, gushings of idle pap?

Pols, ever buffing themselves as patriots, spout the phrases as if the words are from sacred Scripture delivered across the fruited plain as the faithful head for the November voting booths.

And God bless America. Rarely does a political speech end without a call to the deity to shower the USA with a blessing. But why not God bless everyone?

Why not God bless America and Islamic jihadists? The latter routinely cry, "God is great" before suicidally accepting martyrdom and slaying infidels. If God is blessing America while American pilots keep bombing those labeled as terrorists, why wouldn't God, while he's at it, also bless his non-American children? Both sides believe in violence, so what's the theological difference? Whether it's an American bomber or an Islamic State beheader, it's the same God to whom they pray.

The late Edward Guinan, founder of the Community for Creative Non-Violence, once wrote, "There can be no 'we's' and 'they's' in our lives, but only brothers and sisters -- all children of God, all sacred and dignified. Destruction of any one of these God-gifts means a certain destruction of oneself."

Thank you, veterans, for serving your country. The reality is that soldiers serve not their country, whatever that fuzzed word means, but those who run the country: members of Congress and presidents and their national security councils who decide when to invade a country and pay soldiers to do the slaughtering. Veterans suffer high rates of suicide, post-traumatic stress disorder, unemployment and homelessness -- afflictions unlikely to be tempered by hollowed words of gratitude from leaders who never went to war themselves and whose cushioned careers merrily and lucratively roll on.

It has to be wondered: After a veteran is unctuously thanked, how many thankers hand them a few hundred dollars of gratitude? Or pay their medical expenses? Or just buy them a meal?

It can be wondered, too: Would the 1991 decision to attack Iraq have gone so smoothly if a draft were in place? Not likely. Would the vote in the House on Sept. 14, three days after 9/11, been 420-1 if members' children and grandchildren could be dispatched to boot camp and deployed three and four times to Afghanistan? With no draft, and with less than 2 percent of Americans in the military, being in a permanent state of war is casually accepted by a large part of the populace. So let's casually thank the vets.

We will protect our vital interests. What's really meant: We will protect our vital privileges, starting with the privileges that come with being the world's wealthiest nation and we will do the protecting militarily no matter the cost in lives, money and lost honor. The website Global Rich List, sponsored by the humanitarian organization CARE, calculates that anyone with an income over $32,000 is in the world's top 1 percent of earners. Forget bashing the billionaires, Bernie, it's also the thousandaires.

President Barack Obama justifies his militaristic foreign policy by stating in one form or another lines like this: "We must retain the capacity to swiftly defeat any conventional threat to our country and our vital interests."

Protecting the vital privileges of wealth -- as currently found on Wall Street when the Dow and equities are at record highs -- can mean ignoring the needs and rights of the unprivileged. Years ago, Oscar Arias, president of Costa Rica, stated, "Three billion people live in tragic poverty and 40,000 children die each day from diseases that could be prevented." War, he said, "is a missed opportunity for humanitarian investment."

We are the leaders of the free world. This is little more than self-absorbed delusional bragging, traceable to the Cold War when we were in a lather about the Soviet Union being the leader of the unfree world. A global election has yet to be held declaring an American president the world's leader. He's only the self-appointed leader.

But wait, there's competition. When TIME magazine named German Chancellor Angela Merkel, the daughter of a Lutheran pastor, its person of the year in 2015, she was hailed as chancellor of the free world. At least an election was held: by TIME's editors.

And one more: In God we trust. As long as Harriet Tubman is bouncing Andrew Jackson from our $20 bills, why not another deletion: the lie that we are a God-trusting nation. Make it "In bombs we trust." Or "In military might we trust."