Homeless youth seep through the cracks 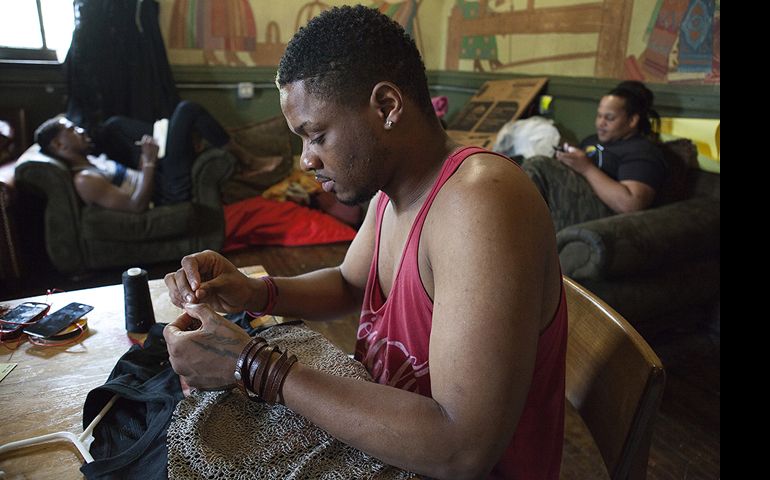 Homeless youth get ready to perform in a production titled "FACES" in cooperation with the Youth Empowerment Performance Project in June 2014. (Courtesy of Chicago Reporter)

Though numbering near 2.5 million, homeless youth in the U.S. manage to seep through the cracks -- undetected, unaccounted for, and also increasingly from the lesbian, gay, bisexual and transgender population.

According to sleepoutchicago.org, up to 40 percent of Chicago's homeless youths are LGBT, despite constituting less than 4 percent of the general population.

"Many of them are straight up thrown out of their houses," said Tracy Baim, publisher of Windy City Times, a LGBT-focused publication based in Chicago. "Certainly from the youth we've met, their families said they needed either to change or leave."

In the 1980s, the average coming-out age hovered in the 20s, while today the average is 16. Though not always the sole reason LGBT kids find themselves homeless, when more than one co-factor (such as poverty, violence, mental health, lack of education, LGBT intolerance, or substance abuse) drives a child to run away, it becomes increasingly difficult for them to overcome their circumstances, says Baim. And while homeless youths number in the millions, just 50,000 a year are served by shelters. The average time they spend on the streets is roughly two years, according to sleepoutchicago.org.

As part of National Hunger and Homelessness Awareness Week, Nov. 14-22, 19 youth agencies in Chicago hosted the first annual Out in the Open Sleep Out on Nov. 20 at Cricket Hill park. The overnight fundraiser was to feature speakers and performers that were to include politicians and homeless teens "educating folks what it's really like to live on the streets," said Baim, who is also the executive producer.

Now or next 60 years

Targeting youth today, activists argue, would prevent having to pay for tomorrow's chronic homeless, as more time on the streets increases the likelihood of a criminal record and health issues, forcing the displaced into costly prisons or hospitals.

"We need to convince a lot of government officials out there that if you don't spend money now [on job training and education], we're going to spend the next 60 years subsidizing their lives instead of having them contribute to the tax economy," Baim said.

She said the homeless issue became a national burden in the 1980s, as group mental homes closed, leaving people on the streets; as drug policies became more stringent, breaking up families; and as welfare laws created a hierarchy of needs, such as prohibiting its recipients from marrying. But LGBT kids running away from home, Baim added, is a relatively new phenomenon.

Roughly eight in 10 gay youths who are in Illinois' Department of Children and Family Services are likely to experience homelessness at some point, according to sleepoutchicago.org. Both Baim and Nan Roman, CEO of the National Alliance to End Homelessness, said that life in foster care only continues the conflict for LGBT kids as they hop from home to home.

Baim noted that foster families tend to be particularly religious and often have difficulty accepting the gay youths, hastening their transitions to the next family. "These foster families aren't knowing how to handle it," she said, adding there's a need to recruit progressive parents for the program. "Why are they being given these kids if they can't support who they are?"

Those who do last in the foster system until they're 18, Roman said, age out of the system without any support. Youth shelters that serve those up to 18 years old (sometimes as old as 25 years) tend to fill up quickly, typically leaving the young adults to seek shelter with adults -- a violent alternative for those who are gay. Trans females who are sheltered among men, for example, are often assaulted, adding another layer of problems to an already harsh reality.

"It's easy for us to get caught up in talking about all the problems or reasons they become homeless, and one of the things we forget to talk about is how resilient they are," said Barbara Bolsen, vice president of strategic partnerships and community engagement at The Night Ministry, a Chicago-based organization that works with the homeless. "I never cease to be blown away by that."

Baim agreed, adding that homeless youth possess untapped potential through the "entrepreneurial skills" they acquire living on the streets.

"Every week, they had to figure out where to sleep, how to find friends, what to do if their phone got stolen. Their skill sets are very unique, and we, as a society, need to figure out how we can learn from them. It's a two-way street."

Initially worried that homeless youth would be too sensitive to work with, Baim added that she was impressed by their ability to rebound from failure or disappointment, and surprised at how easily she could treat them as adults.

"Their ability to tell their stories is much more important than any other research I could have done," she said. "I never realized what good partners they are to creating solutions."

Tapping into that creativity, the Youth Empowerment Performance Project helps LGBT youth acquire housing while providing them with an artistic outlet, said Bonsai Bermudez, executive and artistic director of the project.

After months of therapeutic exercises -- whether through music, design, movement or writing -- the youth assemble a production that they perform across the country, presenting a "more humanistic, vulnerable side to their stories," Bermudez said. "After having such complicated life stories, there's power in rewriting their stories through production."

Bermudez said that the project, which will present three performances at the Sleep Out, is not just therapy for the performers, but also a rich opportunity for its audiences to hear compelling personal experiences that involve such issues as HIV, suicidality and systemic violence.

"A person leaves the room with a level of awareness that is powerful, deep into their emotions," he said. "They're experiencing someone with enough courage to tell their story."

Homeless teens aren't necessarily striving for conventional success, said Rabbi Menachem Cohen, youth outreach manager for The Night Ministry. Rather than following the school-job-house standard for success, "we define success as someone identifying what they want to work on, and moving toward achieving that."

Cohen recalled having worked with a young man who experienced homelessness several times throughout his life, and the two had shared both deep and casual conversations about their personal aspirations.

Years later, the rabbi ran into him; the man had a job, had signed up for classes, and had a baby on the way. He thanked the rabbi for being the "touch person" in his life, attributing much of his success to his conversations with Cohen.

"What really struck me about the whole thing was that I didn't help him apply for college or practice with mock interviews, but I talked about real things. He said, 'You talked about your kid, and it made me realize I want to parent like that. You talked about college and I was like, I could go to college, too.'

"It's not that I helped him with tangible things, but what I did was I saw him as a human being with dignity," Cohen said. "That really emphasizes the kind of approach we take -- the low threshold. We meet them where they are. That really has a lot of power to it, and when we do that, they end up choosing to work on things they really want to work on."

[Soli Salgado is an NCR Bertelsen intern. Her email address is ssalgado@ncronline.org. Follow her on Twitter, @soli_salgado.]

*This story has been updated from an earlier version to clarify statistics from the State of Homelessness report.

Protecting the homeless in freezing weather