Hospitality network connects people on pilgrimages with places to stay 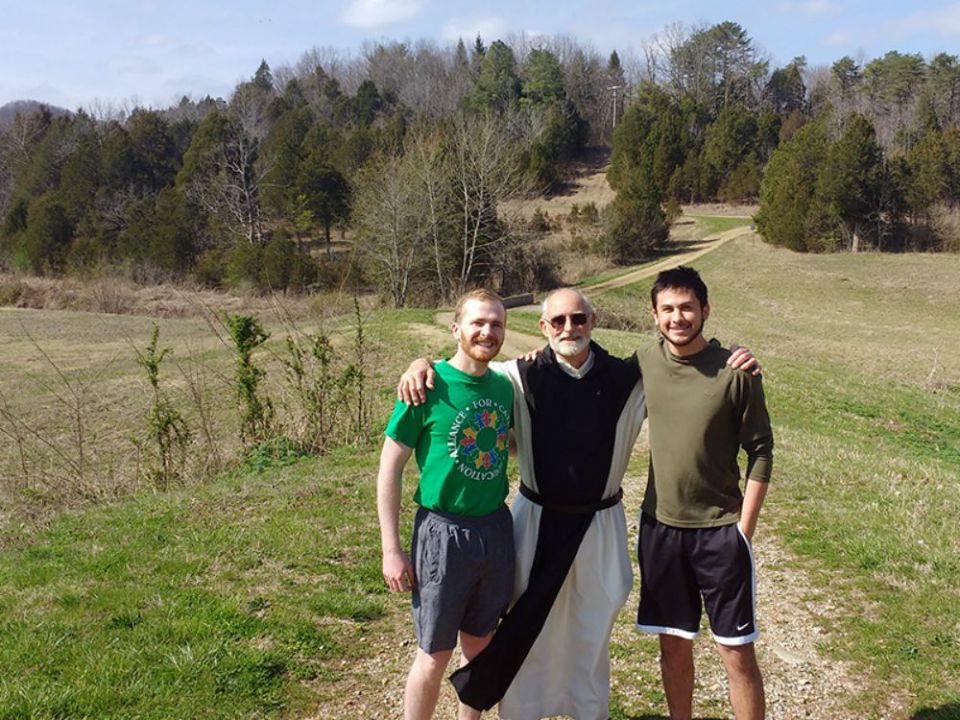 Will Peterson, Trappist Br. Paul Quenon and David Cable at the Abbey of Our Lady of Gethsemani in rural Kentucky, 2017 (Provided photo)

The pilgrimage was once among the most common devotional practices in the church, as men and women, together or alone, would set off on foot to travel, sometimes for hundreds of miles, to visit holy sites. Although the practice has since become less popular, some are now trying to help bring it back, and renew a sense of hospitality and connectedness along with it.

Will Peterson, a San Diego-area Catholic school teacher, is the founder of the Modern Catholic Pilgrim, which hopes to facilitate pilgrimages throughout the United States. Peterson's interest in pilgrimage began after his sophomore year at the University of Notre Dame, when he undertook what he called his "proto-pilgrimage" in 2012.

"I was interning in Chicago and got a little antsy," Peterson told NCR. Looking for a break, he took a train to rural Iowa, sleeping under a tree his first night. On his second night, he asked a priest for permission to sleep in his church.

While he says that he "wasn't quite sure what [he] was doing" when he went to Iowa, Peterson had the opportunity to go on his first short pilgrimage the following year while studying abroad in Europe, when he embarked on a three-day journey to the Vatican over the Triduum with a group of other students.

"I'll never forget waking up Easter Sunday morning," Peterson said, noting that despite the exhaustion of the group after the late-night prayers and activities over the previous few days, "the spirit, the energy that I had was unlike anything I had ever experienced. It was one of the few times in my life I could say the Holy Spirit was tangibly present … and it stuck with me that that happened on pilgrimage."

By the next spring, in 2014, he was ready to do it again, this time in North Dakota. While there, Peterson found lodging by asking pastors if host families would be willing to let him stay the night. 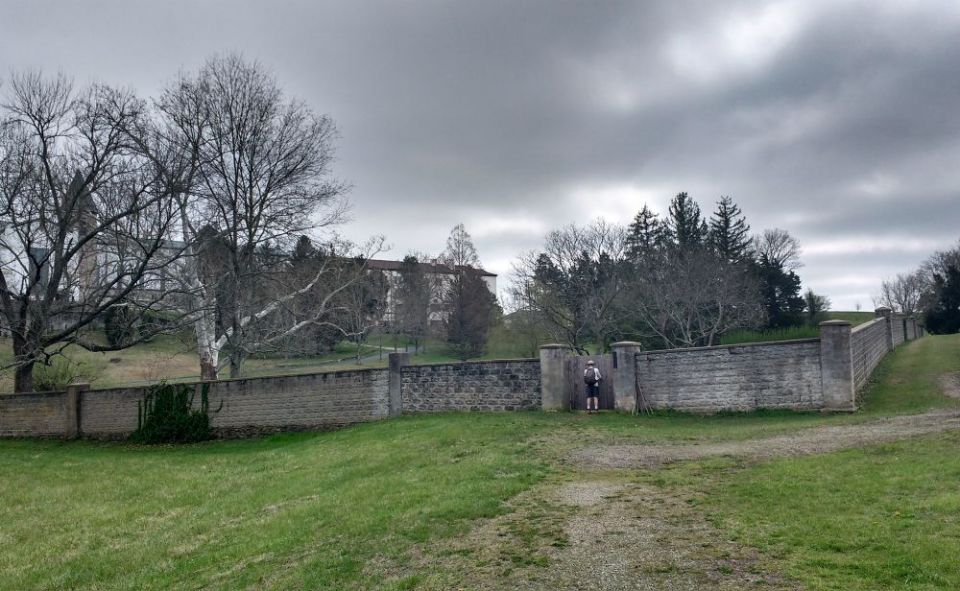 After 75 miles of walking, Will Peterson arrives at the Abbey of Gethsemani on March 29, 2017. The Sprague family hosted Peterson and David Cable for the night (RNS/David Cable)

"It overlaps really well with things I'm interested in," Cable told NCR. "I'm an Eagle Scout, a big hiker … so it seemed [to have] a pretty natural connection to that."

Peterson and Cable agreed on the Abbey of Our Lady of Gethsemani in rural Kentucky as their destination. The abbey is well-known as the onetime home of Trappist monk and author Thomas Merton, who wrote much of his famous work The Seven Storey Mountain, while living at the abbey. "Geographically, it was convenient for us," Cable added, as he was working in Indianapolis and Peterson in Lexington, Kentucky, at the time.

The two men set out from Lexington, about 75 miles from the abbey, on March 26, 2017, following Peterson's method in North Dakota of finding hosts from Catholic communities along the way. They ended up staying in a few homes and one homeless shelter. They walked the entire distance on foot — except for a few miles' ride from one of their hosts on the second day as storm clouds approached. Their journey ended March 29, when they arrived at the abbey.

Peterson and Cable also maintained a blog at Religion News Service during their travels, where they recorded the story of their pilgrimage, along with some reflections and insights gained, in entries over the four days.

At the journey's conclusion, "I was on fire, I was thinking we need to get more people doing this," Peterson said. In August 2018, he led a pilgrimage with a few friends from Mission San Diego de Alcala to Mission San Luis Rey for the feast of St. Louis. While he hopes to organize a few pilgrimages a year, he also wanted Catholics throughout the U.S. to have the ability to go on their own pilgrimages.

"We started trying to put structures in place, finding hosts along different routes," Peterson said. Out of that effort is the Modern Catholic Pilgrim project. Today, hosts line not only the road from Lexington to the Abbey of Our Lady of Gethsemani, but also from Louisville to the abbey, as well as the route from Mission San Diego de Alcala to Mission San Luis Rey in Southern California. 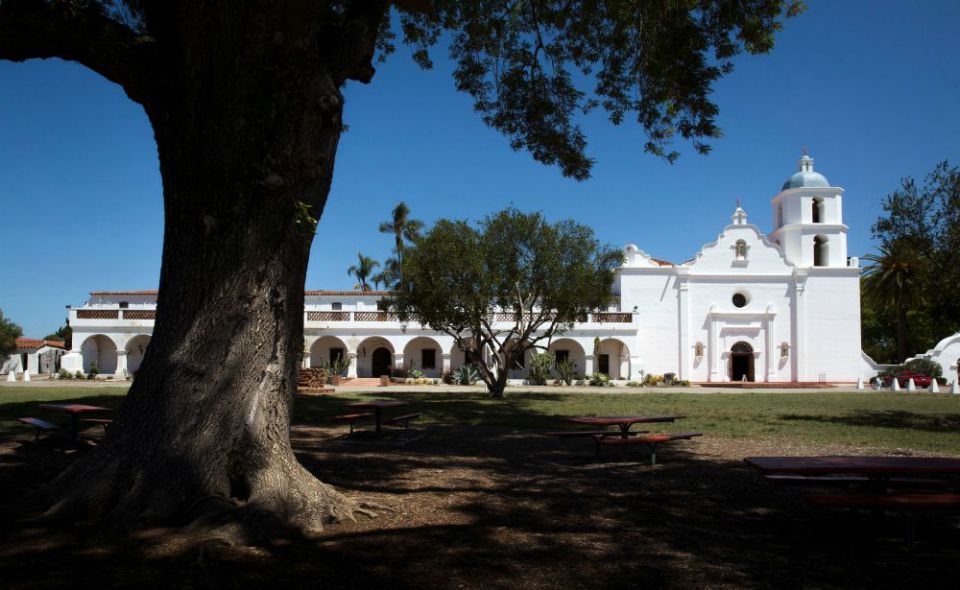 Peterson says he hopes to soon connect all the California missions with pilgrimage routes.

The Modern Catholic Pilgrim also offers help to those interested in transportation to Immaculata Church in Cincinnati, where praying while climbing the steps to the church atop Mount Adams has long been a popular devotion. It can connect pilgrims visiting the Grotto of Our Lady of Lourdes in Indiana with a host as well.

Although the benefits of undertaking these journeys can be enormous to pilgrims' spiritual lives, "the hospitality aspect might become the most important aspect." By hospitality, Peterson says he means "not the warped version that's an industry now, where you get the wine list at a restaurant or chocolate on your pillow at a hotel, but to truly connect with others and to have that space in which to share your experience and dialogue."

He says he has encountered this kind of hospitality through his journeys; one host shared a very moving conversion story that involved leaving his home, family and country to follow his faith. On his first journey, as he and Cable attempted to contact their hosts from the office of a family-run insurance business as a storm was approaching, the family even offered to let the pilgrims stay with them if their host could not be reached.

"Christian hospitality is an amazing, radical thing," they wrote at their RNS blog.

Ultimately, Peterson hopes to build networks throughout the U.S. so that any pilgrims can reach the country's holy sites.

"The grand vision would be someone can walk out of their house anywhere in the United States, go on pilgrimage, and stay with people along the way," he said. 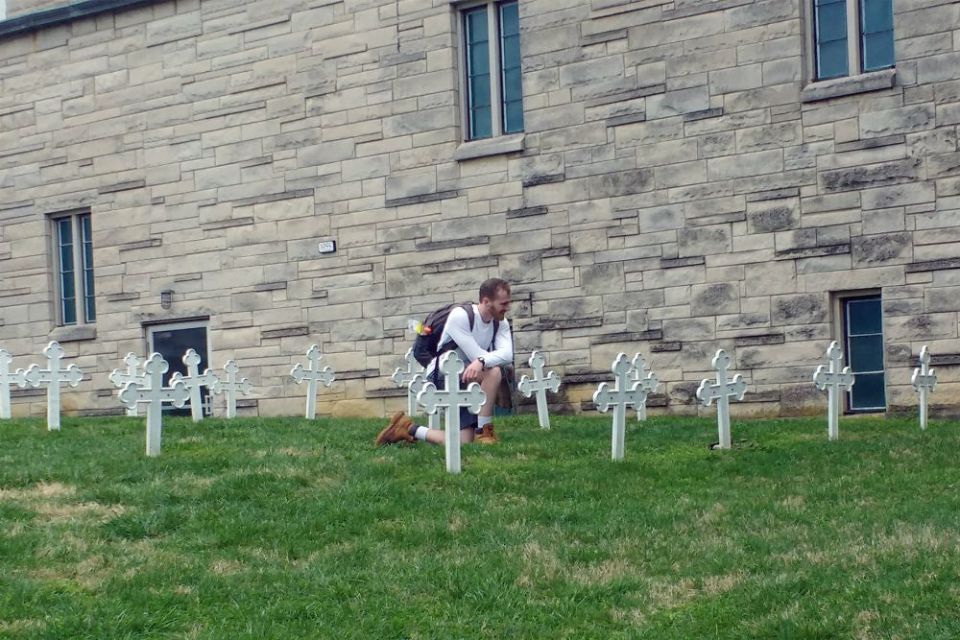 [James Dearie is an NCR Bertelsen intern.His email is jdearie@ncronline.org.]

A version of this story appeared in the Nov 30-Dec 13, 2018 print issue under the headline: Connecting pilgrims with hosts nationwide .

Armchair pilgrimages are meditations during the pandemic

Going on pilgrimage, religious or secular, is important