Hundreds rally against new Mormon policy; many file forms to quit the faith 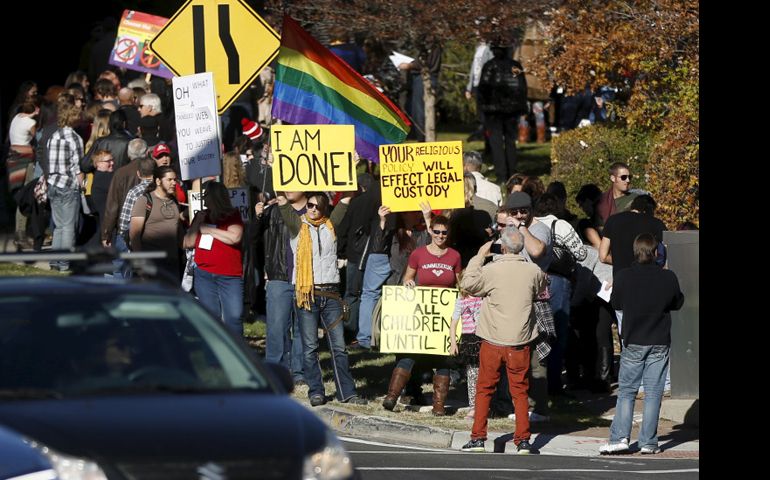 Members of The Church of Jesus Christ of Latter-day Saints and their supporters gather to resign their membership to the church in Salt Lake City, Utah November 14, 2015. Hundreds of Mormons are expected to mail letters resigning from the faith after gathering in Salt Lake City on Saturday to protest a new church policy that calls married same-sex couples apostates and bars their children from baptism. (Reuters/Jim Urquhart)

Salt Lake City — More than 1,000 inactive and active Mormons -- along with their backers -- rallied in City Creek Park on Saturday to protest the LDS Church's recent policy decisions involving same-sex couples and their children.

Many who attended the Salt Lake City event brought rainbow flags in support of the lesbian, gay, bisexual and transgender community. They also hoisted signs with slogans such as "LDS: Love Doesn't Separate."

At one of several tables, attorney Mark Naugle helped Mormons expedite their paperwork to resign their memberships in The Church of Jesus Christ of Latter-day Saints. Their forms were then dropped into a file box, which was rapidly filling 90 minutes after the event began, for mailing to nearby LDS Church headquarters to have those members' names removed from the faith's rolls.

"We've talked to at least 800 people," Naugle said. "It's absolutely more than I expected."

At its peak, the line to drop off resignation papers snaked through the park along State Street, turned east along 2nd Avenue, then curved slightly north along Canyon Road.

Organizers were overwhelmed by the turnout.

Lauren McNamara created the event's Facebook page, which is where many attendees found out about the rally. She initially expected a crowd of about 700 and was "amazed" by the larger-than-expected count.

"The energy has been really positive and supportive," McNamara said. "We may have even reached 2,000."

McNamara said she converted to Mormonism five years ago in Chicago and moved to Utah partly to learn more about the faith. She stopped being a practicing member eight months ago.

"I've read a lot of history on the church since I got here, and there isn't much I've been impressed with," McNamara said. "I decided to resign a few weeks ago, but wasn't ready to submit paperwork. Then, when this last announcement dropped, that was it."

Top LDS authorities have a new policy in place that states Mormons in same-sex marriages or similar relationships must face disciplinary councils -- and possible excommunication -- and that their children generally must wait until they turn 18 to be baptized into the faith.

After hearing a round of speeches, Saturday's ralliers loosely marched down State Street past Brigham Young Historic Park to a mailbox on the corner of South Temple and deposited their resignation letters. The box quickly filled.

"The church's decision about families was the final straw for me," said Connie Walker, who carried a bright pink sign that read "I'm Resigning Today Because Jesus Says Love Everyone."

Walker said she stopped participating in the faith about a decade ago "after living outside Utah and realizing that people are good regardless of where they are on Sunday and what they believe."

An informal poll of people who had joined the event's Facebook page revealed that the vast majority who were resigning Saturday or planned to mail in their letters later either marked "I haven't believed [in church theology] for years" or were "Inactive." Few were active Mormons.

"Resigning is a really big step for people, because the church has filled so much of their life," said Steve Holbrook of Post-Mormons and Friends. "This is not a statement necessarily against the church. We just disagree with some of the directions the church has been going in."

Church spokesman Eric Hawkins said Friday that the faith doesn't like to "see anyone leave the church, especially people who have been struggling with any aspect of their life."

Aaron Linford, who was a practicing Mormon until a year ago, was one of many to drop off resignation documents.

Why black clergy ought not oppose same-sex marriage