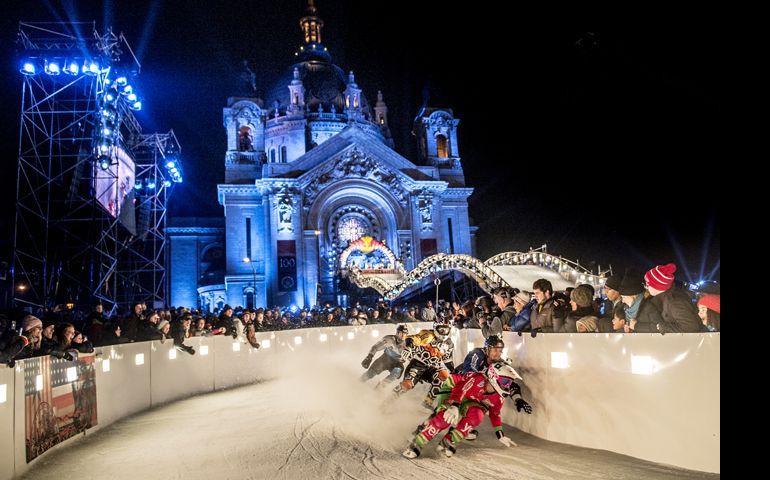 St. Paul, Minn. — As the national Red Bull Crashed Ice tour -- which features skaters racing down a steep course -- holds its championship final here this weekend, the tour is being threatened to be shut down by marchers involved with the Black Lives Matter movement.

The weekend event, which starts at the steps of the hilltop Cathedral of St. Paul then races downhill past the Hayden Center, an archdiocesan office building,* has been held at St. Paul in various stages of the competition for four years and is estimated to bring up to 140,000 mostly youthful spectators to watch. This is the first year that St. Paul has hosted the finale.

Black Lives Matter has said that they will hold a protest rally and perhaps keep the already chaotic event from happening by blocking commerce to promote their cause. The movement will protest unless seven reform and transparency demands are met -- which some local officials say may be either unworkable or already in the works.

The Black Lives Matter movement's protests around the Twin Cities started in earnest in November 2015, when a young black man who was allegedly unarmed, Jamar Clark, was shot to death by Minneapolis police responding to a domestic dispute. The police say the youth was reaching for an officer's gun during a scuffle; some witnesses content Clark was shot while handcuffed.

In January, Black Lives Matter blocked traffic on a busy bridge on Martin Luther King, Jr., Day. Posting on Facebook, St. Paul Police Sgt. Jeffery Rothecker called the protestors "idiots" and said to "run them over" if they again block a freeway. Rothecker also gave tips how to get away with such an act without being prosecuted. He has since resigned, but Black Lives Matter has said repeatedly that the protest of the Red Bull Crashed Ice tour will go on. The movement hasn't said exactly how they hope to disrupt the event, but in earlier protests at the international airport, Mall of America and freeway lanes, they have marched and laid down on the ground to block traffic and shopping.

The leader of the Black Lives Matter movement in St. Paul, Rashad Turner, said he had hoped to meet with St. Paul Mayor Chris Coleman this week, then "evaluate where we are at and move forward from there."

Although acknowledging that the sports event needs to go on unfettered, Coleman said in a statement, "there is no more important issue to me than addressing the persistent racial disparities in our community."

The seven demands are the "moral and ethically correct thing to do," said Turner. Their aim is to disrupt "commerce in order to get the powers that be to wake up and take action."

"We are looking forward to once again bringing Red Bull Crashed Ice to the residents of and visitors to St. Paul for the fifth year in a row," said a statement from Leigha Kristoff, specialist in activation and communications for sports for the company, adding that there are not concerns about the event coming off as planned. Any questions about possible disruption are being forwarded to the St. Paul Police Department and city offices, Kristoff added.

The protest hasn't stopped local church and community members for gearing up for a fun and wild event that is billed as a mix of hockey, snowboarding and downhill skiing. Known to many as the fastest sport on skates, racers reach speeds of 40 mph while they negotiate obstacles on a luge-like course that runs for hundreds of yards and has a total drop of 12 stories. The huge starting ramps begin at the doors of the Cathedral, take a steep drop, then arch higher again to get over a street and head down a large hill.

"The city of St. Paul approached the Cathedral five years ago, asking to partner with an idea to bring a fun, large-scale event to the city in the same time frame as the St. Paul Winter Carnival. Thus began the relationship," said Fr. John Ubel, rector at the Cathedral.

"The archdiocese and Cathedral work together in hosting the event and the production crew. The (temporary) track, construction equipment and mobile offices use the grounds and parking lots of both," said Joseph Kueppers, chancellor for civil affairs for the archdiocese, and is handling contracts and other such logistics for the event. "The archdiocese provides office space in one of our buildings for some of the production crew, who are on site for six weeks."

The Cathedral is in communication with all of the entities involved in the tour, including Red Bull, Hangman Productions and various offices representing the city of St. Paul.

"Having the Cathedral as the backdrop is evangelization in and of itself -- especially when it is illuminated at night with all the event lights. It is spectacular," Kueppers said. "Once again this year, the trophies for the winners are the shape of the Cathedral dome." Red Bull works with the Cathedral ahead of time to film promotional and other videos that play during the event, and coordinates the ringing of the Cathedral bells during the races.

"They really highlight the beauty of this historic church. At some point during the weekend, Fr. Ubel usually meets with the group of athletes and gives them a blessing," Kueppers said, adding that the same is done by Archbishop Bernard Hebda, apostolic administrator of the archdiocese.

During the event nights, Friday and Saturday, the Cathedral is open for visitors and Crashed Ice spectators, and during the week prior, groups of spectators linger with their cameras, capturing construction crews as they work into the evening amongst glowing lights to get the facility ready.

Each year, a media day is held when groups such as the mayor and associates can test a portion of the track. "For the past few years, we've had a priest or two do this," Kueppers said, noting that this year, six archdiocesan representatives tested out the track, including Fr. Paul Shovelain, associate pastor of St. Peter Catholic Church, Forest Lake, Minn., and deacon Michael Daly, a seminarian at The Saint Paul Seminary.

Archdiocesan and Cathedral employees are cheering spectators, Kueppers said. "The entire event (including test runs) garners much local news attention, and reminds people that the church is alive, active and enthusiastic in St. Paul."

Members of the Cathedral Young Adults group are present, along with confirmation students, to greet any who enter the building, offer "two-minute tours" that include an introduction to the architecture of the church, and hand out welcome cards, Ubel said.

The championship weekend in St. Paul is the final in a four-race series that draws competitors from all over the world. The Crashed Ice website refers to the Twin Cities venue as "the spiritual home" of the event.

Those in the archdiocese acknowledge there is a serious side to this weekend's happenings.

"The church is a long defender of civil rights and holds very dear the right of all Americans to assemble and protest when they believe injustice — of any kind -- is happening," Kueppers said. "We support the ongoing dialogue the St. Paul Police Department is engaged in with Black Lives Matter and efforts to make sure they are peacefully heard with dignity and the Crashed Ice event proceeds as planned."

[Joe Winter is a freelance writer that lives in Hudson, Wis.]

*The wrong building was listed in the previous version.