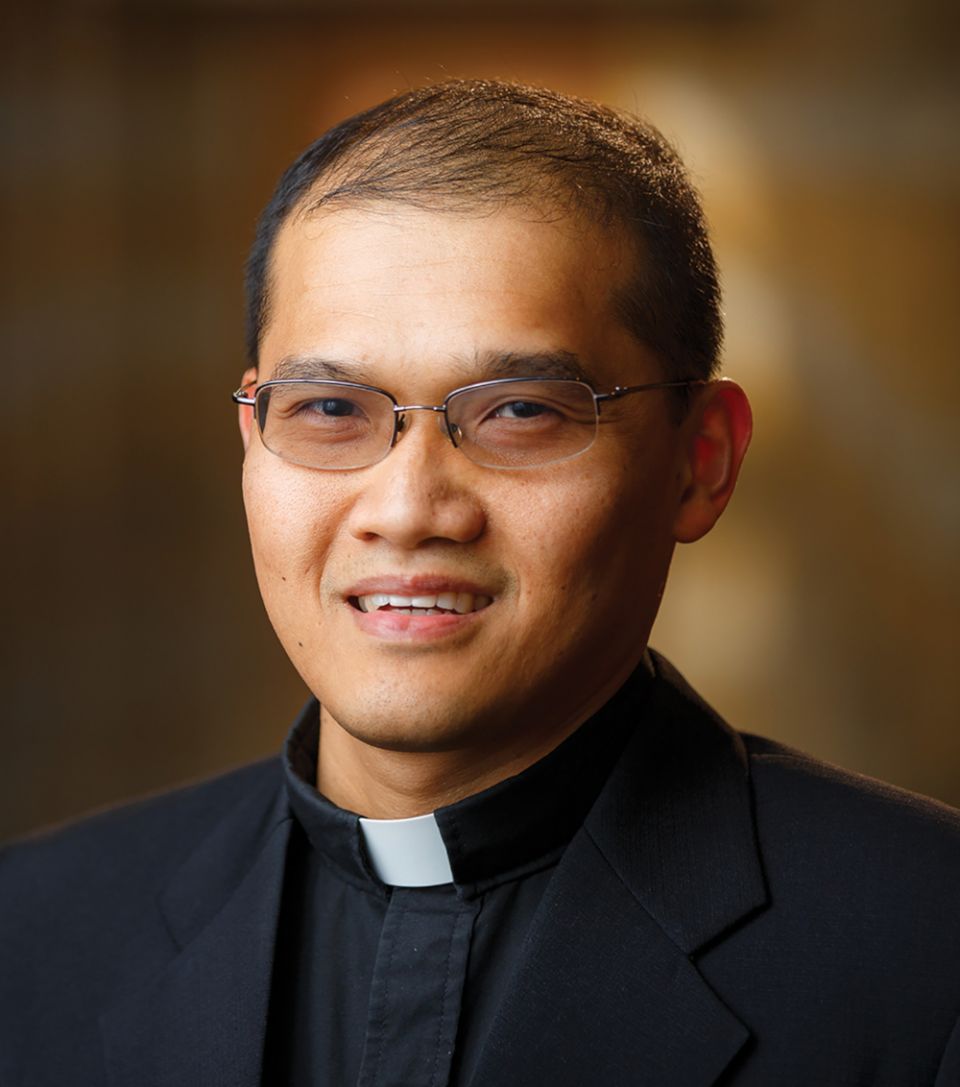 Jesuit Fr. Stefanus Hendrianto, 45, was a leader in the pro-democracy movement in Indonesia in 1998 that finally brought down the authoritarian Suharto regime. He left political activism and eventually studied for the priesthood, being ordained in June in Portland, Oregon. He is pictured in a Nov. 11, 2019, photo. (CNS/Peter Ringenberg, courtesy Jesuits West)

Jakarta, Indonesia — Fr. Stefanus Hendrianto, 45, was among the ranks of students involved in the pro-democracy movement in Indonesia in 1998 that finally brought down the authoritarian Suharto regime after 31 years of iron-fisted rule.

He was a law student at Gajah Mada University in Yogyakarta and went to Jakarta to join other students in the anti-Suharto protests.

The series of rallies were marred by bloody incidents in which several students were shot dead, some kidnapped and disappeared before Suharto finally stepped down on May 22 of that year.

Hendrianto then was one of the leaders of the People's Democratic Party, one of the main opposition groups to the Suharto regime.

Shortly after Suharto's fall, which heralded the beginning of the reform era, Hendrianto chose to seclude himself from activism and continue his law studies abroad.

That decision would lead him to a completely different way of life -- the life of a priest.

Hendrianto was ordained June 8 with four other Jesuits at Our Lady of La Vang Church in Portland, Oregon, and belongs to the Jesuits West province, which encompasses the Pacific coast states plus Alaska and Hawaii. Portland Archbishop Alexander Sample presided.

He described the change in his way of life as "a mystery" and completely unplanned.

"When I was a child and lived in Indonesia, my intention was not at all to become a priest," he told ucanews.com.

The young Hendrianto chose to pursue a master's degree in law at Utrecht University in the Netherlands, while his fellow activists chose to walk the political path. After earning his degree, he returned to Indonesia and worked as a legal assistant for the International Monetary Fund in its Jakarta office.

Seeking a more meaningful life, he entered the doctorate program at the University of Washington Law School in Seattle. There, he said, his life's journey changed, especially after his interaction with Catholics from other universities in the city.

"They helped me a lot in shaping my faith and ultimately led me to the priesthood," he said.

Hendrianto said the seed of a priestly vocation grew stronger when he became active in a Dominican-run Newman Center. A presentation on Catholic faith and political philosophy by Jesuit Fr. Robert Spitzer, then the president of Gonzaga University, had a particularly deep influence.

"At that time, I thought, if I wanted to become a priest, it should be like Fr. Spitzer," he said.

It was not his first encounter with the Jesuits, however. While in Indonesia, he often spent time in parishes served by Jesuits.

"While I was still studying at Gajah Mada University, I always attended Sunday Mass at Sanatha Dharma University's chapel, which was served by Jesuits," he recalled to ucanews.com.

After moving to Jakarta, he attended Mass at St. Mary of the Assumption Cathedral, which the Jesuits also served.

In 2009, upon the completion of his doctorate degree, he entered the Jesuit novitiate in the United States.

Later, in 2016, he studied philosophy at Loyola University, Chicago, and also enrolled at the Boston College School of Theology and Ministry, where he earned master's degrees in divinity and theology.

That led to a stint teaching law and political science at Jesuit-run Santa Clara University in California, followed by writing and research at the Kellogg Institute for International Studies at the University of Notre Dame.

Looking back on his time as a student-activist, Hendrianto said it was part of the process as a young man, who was both "idealistic and naive." As a young man, he felt the calling to change the world by joining the student political movement, but it failed to address his spiritual quest.

"My heart was filled with revenge, anger and bitterness," he said. "All of these things made my life empty. In principle, my soul was like being in a dry, barren and waterless field."

He said although he became a Jesuit later in life than most men, he has discovered that Ignatian spirituality answers what he had been long been searching for.

He even found a similarity between himself and St. Ignatius of Loyola.

"If you look at the life experience of St. Ignatius of Loyola, he also decided late to become a priest and then established the Society of Jesus."

"He also had to go back to school and learn Latin together with the younger ones. I am also more or less the same and study philosophy with undergraduate students," he said.

"I am proud because it means that I am walking his path."