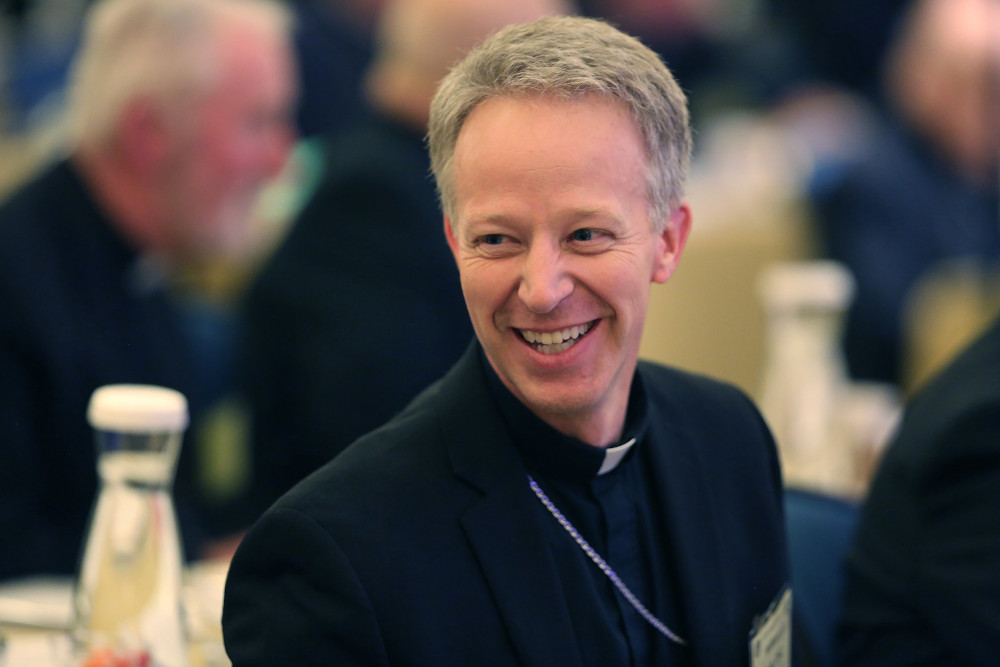 "We've reached the end of Christendom," said Wack, who told NCR in a recent interview that the church's goal should not be to restore a supposed golden age of Christianity or rebuild a political culture where the Christian faith reigns supreme.

"Our faith is not built on this state-sponsored or state-supported Christianity. It's built on a person: Jesus Christ, who is the same yesterday, today and tomorrow," said Wack, explaining in the interview his vision of the Christian faith and modern society that he wrote about in his first pastoral letter.

Released Nov. 4, Wack's 18-page letter, entitled "Sharing the Gift," focuses on evangelization. Echoing Pope Francis, Wack urges Catholics in his northern Florida diocese to become "missionary disciples" by living their faith and seizing opportunities to share it with their neighbors.

In "Sharing the Gift," Wack, a Holy Cross priest who became the bishop of Pensacola-Tallahassee in August 2017, cites Gaudium et Spes and Lumen Gentium from the Second Vatican Council.

Wack also acknowledges the "great deal of anger, division, anxiety and hopelessness" in modern times. In such circumstances, Wack says the temptation is to retreat and "circle the wagons" to defend the Christian faith from outside forces, or to use the Gospel solely to address hot button social issues. Such approaches, Wack says, miss the essence of the Christian faith.

Wack discussed his pastoral letter in an interview in early November, before the U.S. bishops' assembly in Baltimore, where the bishops approved a document on "eucharistic consistency" after months of controversy over efforts by some prelates to address pro-choice Catholic politicians like President Joe Biden.

Following is NCR's interview with Wack, edited slightly for length and context.

NCR: Four years since becoming a bishop, what made this the right time to put pen to paper and write your first pastoral letter?

Wack: When I got there, everything was new. I came right from a parish to becoming the bishop of a diocese. And we had a lot of issues come up; we had hurricanes, we had personnel issues, we had a fire in the co-cathedral, and then the pandemic. I spent most of the first 3 1/2 years sort of reacting to things going on in the world and in this diocese.

Finally, half a year ago, I thought, "This is it now. It's time to teach and put out my hope, my plan, my heart for the diocese." There was never going to be a perfect time when everything is slow and quiet. It just felt right.

Plus, this isn't just my plan; it's come from my interactions with the people, the parishioners, the priests here. The spirit is moving us, I think, to do something very positive. We're arguing over everything. There's so much acrimony and division. We have to get out there. We have to evangelize again. 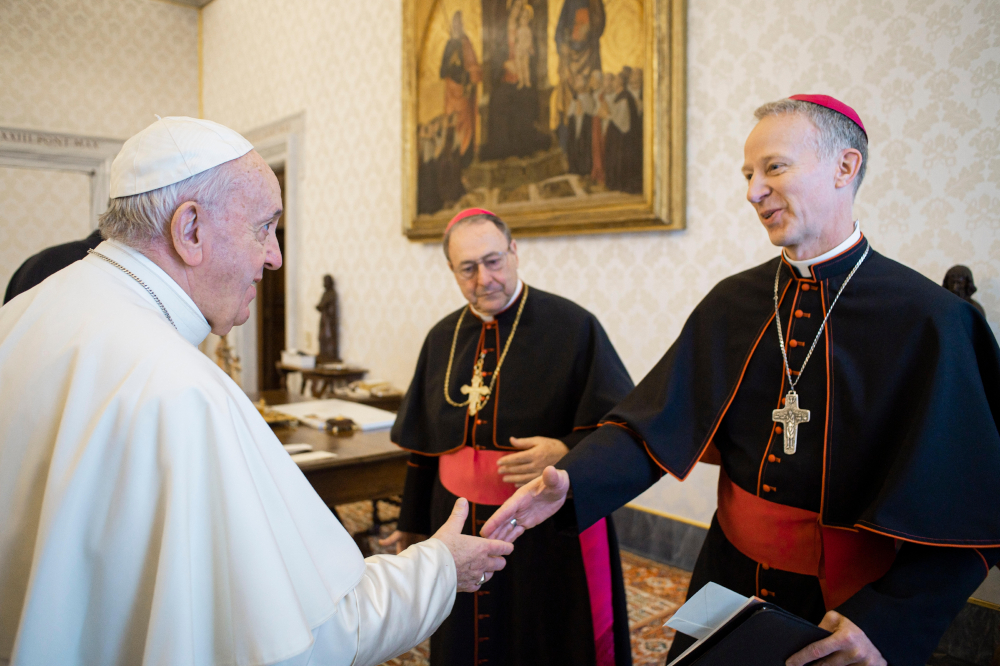 What made you want to focus on evangelization?

We're in a world that's very fractured, very fearful. There's confusion, there's anger, there's anxiety. And that's nothing new. That has existed since the time of Jesus, and before Jesus. But in the middle of that, we are called to live our faith. We are changed people because of Jesus Christ. Pope Emeritus Benedict XVI said we have this relationship with Jesus, and that changes the whole direction of our life. But if you look around, it doesn't look like we believe or we're living that. We're caught up in so many things going on.

In the letter, why did you write that Christendom is "dead"?

I meant that to be provocative, so people can look that up, talk about that and ask themselves what that means. It really means that we're back in apostolic times. We have to just go out and preach the good news, in very simple ways. I'm not saying you should go out on the corner with a Bible and a catechism. If you do, great, but share your faith. Pray in public. Give people hope. Comfort people. Point them toward something greater than all this stuff that we're dealing with today.

Do you see the church's mission today as trying to somehow restore Christendom, as some would argue, or something else?

I don't think that's our goal. In writing that provocative statement, I want to help people to see, to make sense of what's happening in the world, and give us a positive direction. We can no longer take for granted that Christian values are the norm, and that's OK. We're not going back to repair this and figure out how we can have this empire again or whatever. It's about what God is calling us to do now.

As you noted in your letter, the Gospel was brand new in apostolic times. Two thousand years later, there's a sense that Christianity has been tried and found wanting. How do you evangelize in a way that is relevant in the 21st century?

That's why I think we have to embody [the Catholic faith]. Even with this letter, it's important to note that I'm not telling people, "Hand this out to your friends, and you're evangelizing." This is really written for those who are already in the pews to give them the tools or to challenge them to embody the faith in very simple ways. We can all live in such a way where people will tell us, "I don't know what it is about you, but I want it."

In quoting from Lumen Gentium and Gaudium et Spes, is it fair to say that your vision of evangelization is rooted in Vatican II?

I definitely wanted to give people that impression. Vatican II recognizes the need for us to go out of ourselves. Before that, understandably and naturally we were taking care of our own. But I think with Vatican II, we realized that we've got to share this gift with the whole world. We are leaven for the world. Pope Francis has picked that up and is all about missionary discipleship. It's not just something that I made up or Pope Francis did. It's clearly part of our history.

What do you make of the divisions and acrimony in the church, especially those that we see play out between bishops and among Catholics on social media?

Unfortunately, this has always been there. We have the famous story of Peter and Paul disagreeing on [evangelizing] Gentile Christians, and how Paul said he was going right to Peter and look him in the eye to tell him he was wrong. I think it's good for people to know that this is nothing new. Unfortunately, what is new is that it's amplified on social media. 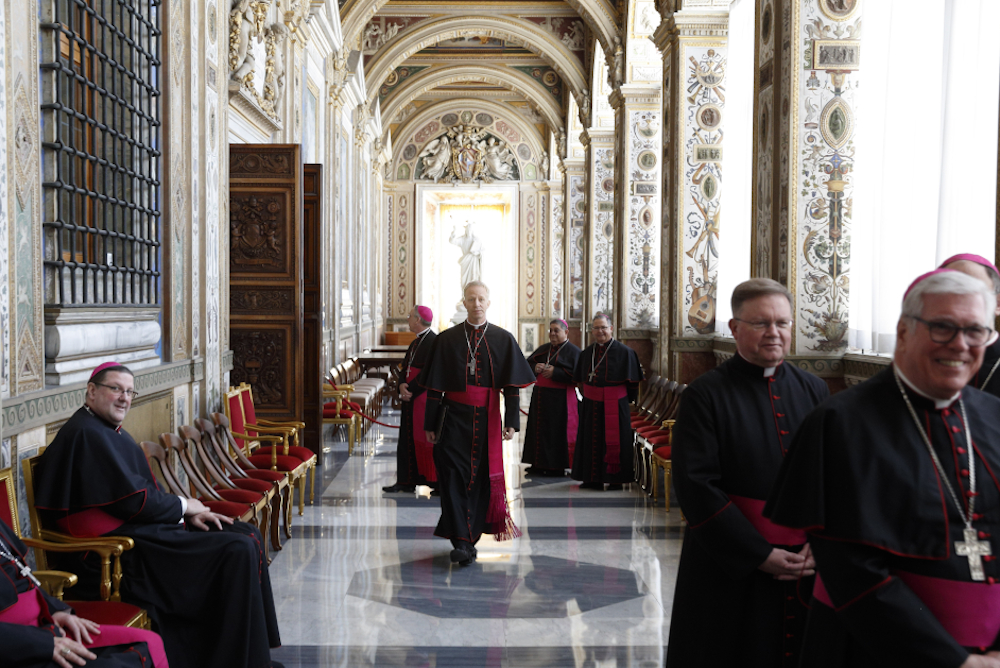 What do you think of how political some of the debates have become within the church?

I stay away from it. In the Bible, Jesus was asked about paying taxes. I loved his response. He didn't say yes or no. He said to give to Caesar what is Caesar's, but the most important thing is to give to God what is God's. I guess that's what I'm really trying to focus on, that second part. We're so caught up in these hot button issues of our day, which are important and need to be addressed, but I fear we are neglecting the second part.

In that spirit, would Jesus tell us not to get caught up in the culture wars?

I don't know. It would have been interesting to know what he would have said about all these things. But we do know that when he was questioned about certain issues of his day, like paying taxes, he just kind of waved them off. We all have different lenses through which we read the scriptures, but for me I see Jesus setting his face to Jerusalem and people trying to distract him and trip him up. His response always was, "You're not getting it, people. God is love, and he wants you to accept that and he wants you to pass that onto other people. That's why I've come." Some would say that's overly simplistic, and I understand that. But that's who I am.