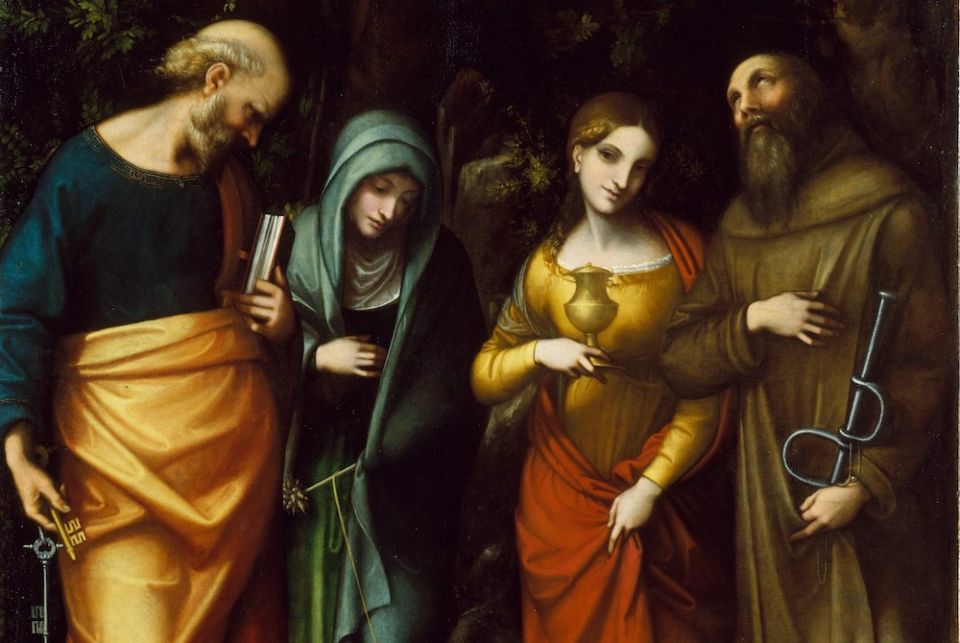 Detail of painting "Saints Peter, Martha, Mary Magdalen and Leonard" by Correggio (Antonio Allegri), circa 1515; British theologian Tina Beattie: "There is no suggestion in Scripture that Mary Magdalene was a prostitute. As the woman who first preached the Resurrection to the other apostles, she was widely portrayed in medieval art and hagiography as a preacher." (Metropolitan Museum of Art)

A prominent member of a church reform group in Ireland has expressed outrage in a letter to Irish Bishop Denis Nulty over his reference to Mary Magdalene's "colorful past" in an April 11 homily for a televised Mass.

Brendan Butler, who helped establish the "We Are Church" movement in Ireland as well as co-founded the Irish El Salvador Support Committee, told the Bishop of Kildare and Leighlin that his allusion was a "misogynistic slur against the Apostle Mary."

Butler heard the reference as he watched a Mass celebrated by Nulty for Divine Mercy Sunday on RTE Television, Ireland's national broadcaster. Churches in Ireland remain closed to public worship as part of the country's continuing measures to contain the spread of the coronavirus.

Speaking to NCR after sending his letter, Butler said he was dumbfounded by the bishop’s words about Mary of Magdala, who the Gospels recount as a follower of Jesus and a witness to his crucifixion.

"I just couldn't believe my ears," said the church reformer. "I was so angry with his use of that derogatory remark, especially in this age when women are seeking equality in the church and are seeking not be seen as sexual objects but as human persons."

Butler called on Nulty to apologize. He noted that many of the mother and baby homes run in Ireland and Northern Ireland in previous decades to care for unwed mothers were termed as "Magdalene Laundries."

Many of those institutions have been criticized for separating mothers from their children, for providing poor health care, or even abusing children. An Irish government report in January said the homes caused a higher rate of death for infants born in them.

"These institutions for so-called 'fallen women' were misnamed Magdalen homes," said Butler. "Bishop Nulty should have been aware of the injustice inflicted on these women and their families and how his insensitive words would re-traumatize them."

Asked for a response to Butler's criticisms, a spokesman for the Irish bishops told NCR: "Bishop Nulty has no further comment to make on his homily as it is clear in its message and speaks for itself."

British theologian Tina Beattie said biblical scholars, church historians and feminist theologians agree that the reputation of Mary Magdalene as a reformed prostitute is the result of the conflation of several stories surrounding women in the Gospels and the early church.

"There is no suggestion in Scripture that Mary Magdalene was a prostitute," said Beattie. "As the woman who first preached the Resurrection to the other apostles, she was widely portrayed in medieval art and hagiography as a preacher."

Beattie, who has recently retired but remains director of Catherine of Siena College, based at the University of Roehampton, noted that Francis in 2016 raised Mary Magdalene's July 22 memorial to a feast on the church's liturgical calendar, like the apostles.

She said the tradition of Mary's "colorful past" is often traced back to the sixth century's Pope Gregory I.

Beattie suspects that Gregory was only repeating a tradition that may have been created as much by abused and prostituted women seeking refuge, healing and redemption in the early Christian community as by a patriarchal elite.

Beattie, whose area of specialty is gender, sexuality and Marian theology, noted: "However colorful her imagined past might have been, what matters surely is that the risen Christ chose a woman to go and preach the good news, to be the apostle to the apostles, and the significance of that is something the Catholic Church has yet to recognize."

Sunday of Divine Mercy: Are you convinced?