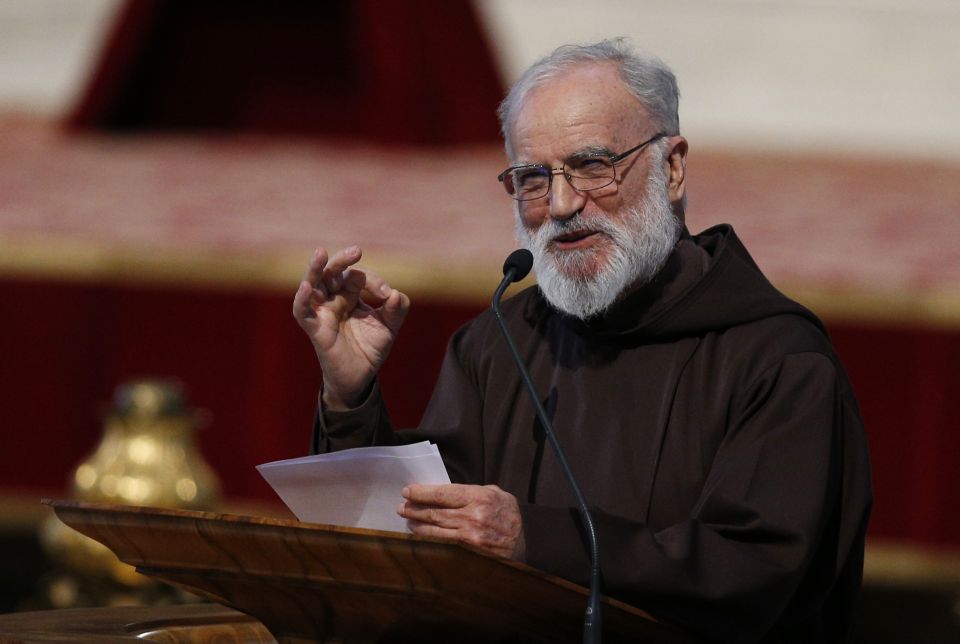 For more than 38 years, Capuchin Fr. Raniero Cantalamessa has preached to the pope and top officials of the Roman Curia. In early January, he will lead the weeklong retreat of the U.S. bishops. He is pictured in a 2014 photo. (CNS photo/Paul Haring)

Vatican City — For more than 38 years, Capuchin Fr. Raniero Cantalamessa has preached to the pope and top officials of the Roman Curia. In early January, he will lead the weeklong retreat of the U.S. bishops.

As they continue to study and discuss ways to respond to the clerical sexual abuse crisis, the bishops will gather for the retreat Jan. 2-8 at Mundelein Seminary near Chicago.

Pope Francis suggested the bishops hold the retreat and offered the services of the 84-year-old Cantalamessa, who has served as preacher of the papal household since 1980.

In an email Dec. 6, the Capuchin declined to be interviewed about the retreat, saying, "At this delicate moment in the life of the U.S. church, I don't believe it would be opportune for me to give interviews."

The theme of the U.S. bishops' retreat will be "the mission of the apostles and of their successors" and will draw from Mark 3:14, which says Jesus "appointed 12 -- whom he also named apostles -- that they might be with him and he might send them forth to preach."

Greg Burke, director of the Vatican press office, told Catholic News Service, "You can see why the pope asked the bishops to make the retreat together in what he told the bishops of Chile: without faith and without prayer, fraternity is impossible."

"At a moment like this, the bishops need to be united in prayer, and Catholics in the U.S. should see them at prayer," Burke said Dec. 13. "A retreat is always a time for conversion, and perhaps there's been no time in the U.S. with more need for conversion than now."

The job of "preacher of the papal household" is not a fulltime position; each year it requires the priest to give an average of eight meditations -- one each on most Fridays of Advent and Lent -- and the homily during the pope's Good Friday celebration of the Lord's Passion.

The title, and the ministry, has a very long history. Superiors of different religious orders took turns preaching to the pontiff and his aides during Advent and Lent until the mid-1500s, when Pope Paul IV appointed the first preacher of the papal household; his successors followed suit, always choosing a religious-order priest for the job. Pope Benedict XIV decided in 1743 to be more specific, decreeing that the preacher of the papal household always be a Capuchin friar.

St. John Paul II asked Cantalamessa to take the job in 1980; since then, the Capuchin has given more than 300 spiritual talks and homilies to the popes and their closest aides in the Roman Curia.

When he is not preaching to the pope, Cantalamessa leads retreats around the world, writes books and articles and works with charismatic Catholics; in late October, he was named ecclesial adviser of "Charis," the new international coordinating body for the Catholic charismatic renewal.

In a 2015 interview with CNS, he said the first time he climbed the steps to the lectern in St. Peter's Basilica to preach to the pope on Good Friday, "It felt like I was climbing Mount Everest."

But, he told TV2000, the Italian bishops' television station, "this post of preacher of the papal household says more about the pope than the preacher. He has the humility to set aside all his important tasks on the Fridays of Advent and Lent to come listen to the preaching of a simple priest."

The three popes he has preached to have given him the freedom to choose the topics for his meditations, he told CNS in 2015. "I try to understand, including with the help of prayer, what are the problems, needs or even graces the church is living at the moment and to make my little contribution with a spiritual reflection."

"Putting the word of God into practice must characterize all preaching," he said. "Pope Francis gives us a stupendous example of that with his morning homilies."

While focused on challenging and strengthening the faith of those he is preaching to, Cantalamessa's homilies have touched on religious persecution, Christian unity, signs of hatred and prejudice in society, violence against women, war and peace, the defense of human life and the abuse crisis.

His homily in St. Peter's Basilica on Good Friday in 2010 caused controversy. At the service, presided over by Pope Benedict XVI, the Capuchin focused on how Jesus broke the cycle of violence and victimizing others by taking on the world's sins and offering himself as a victim.

He had noted that in 2010 the Christian Holy Week and the Jewish Passover coincided, and he told the congregation the Jews "know from experience what it means to be victims of collective violence," and they recognize when other groups are being attacked simply because of who they are.

He then read a portion of a letter he said he received from a Jewish friend, who wrote that he was following "with disgust" attacks against the church and the pope, including because of the abuse scandal. The repetition of stereotypes and using the wrongdoings of some individuals as an excuse to paint a whole group with collective guilt reminded the Jewish author of "the most shameful aspects of anti-Semitism," the letter said.

Cantalamessa later said he was sincerely sorry if he offended any members of the Jewish community or any victims of sexual abuse.

The Capuchin also has preached on the need for the Catholic Church to be honest and transparent about the abuse crisis and to repent for it.

In December 2009, just a few hours before Benedict XVI met with Irish bishops to discuss the clerical sex abuse crisis, Cantalamessa gave one of his Advent meditations. He told the pope and other Vatican officials that, as a matter of justice, the church must publicly admit the weakness of some of its priests.

However, he had said, acknowledging weakness is not enough to "launch a renewal of priestly ministry." For that, he said, the prayers of priests themselves and all the faithful are needed as is a renewed commitment by all priests to devoting themselves totally to serving God and their brothers and sisters.

And, in Advent 2006, leading a meditation on the passage from the beatitudes that says, "Blessed are they who mourn, for they will be comforted," Cantalamessa said the church's tears of shame for the abuse crisis must be turned into tears of repentance.

Rather than mourning for the damage done to the church's reputation, he said, the church must weep "for the offense given to the body of Christ and the scandal given to the smallest of its members."

Pope on Palm Sunday: Life, measured by love, is meant to serve others