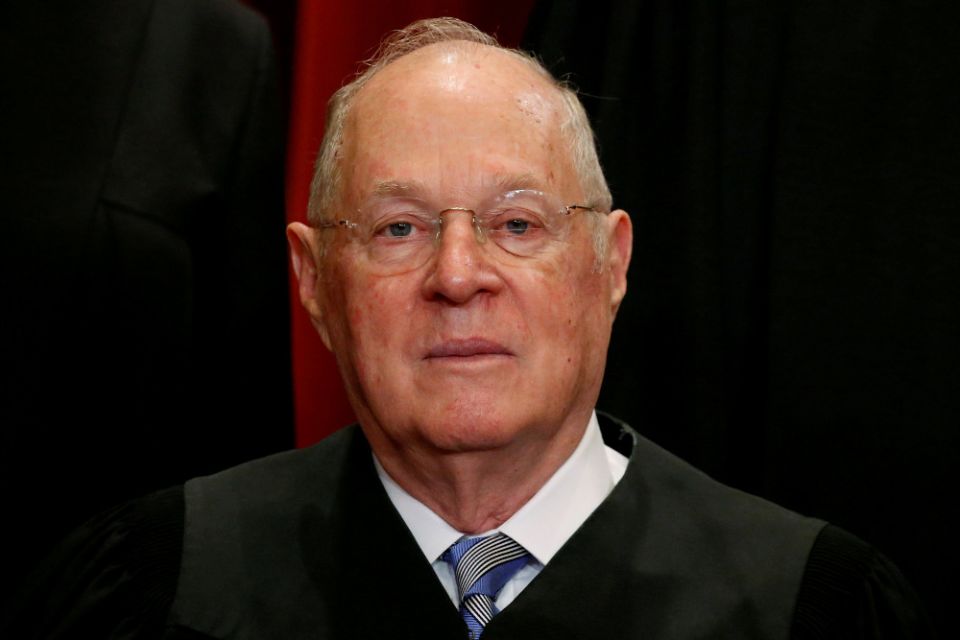 Less than an hour later, President Donald Trump said he would move quickly to nominate a replacement, saying he would review a list of candidates from the list he had to fill the seat now held by Justice Neil Gorsuch after the death of Justice Antonin Scalia.

Kennedy is one of five Catholic justices on the Supreme Court along with Chief Justice John Roberts and Justices Clarence Thomas, Samuel Alito and Sonia Sotomayor.

Rumors about his retirement have been around for a while. Kennedy, who turns 82 in July, is the second-oldest member of the court after Justice Ruth Bader Ginsburg, who is 85. He also is the longest-serving justice currently on the court, appointed in 1988 by President Ronald Reagan.

A California native, Kennedy took over the family law firm practice in 1963, the year his father died. That same year, he married Mary Davis. The couple has three children.

In recent years, he has been viewed as the swing vote — a term he has been said to despise. He has been known for conservative views but has also sided with decisions that focused on individual rights.

Kennedy wrote the 2015 majority opinion in the 5-4 decision in Obergefell v. Hodges, which said there was a constitutional right to same-sex marriage. He also wrote the majority opinion in Citizens United case in 2009 which said political spending is a form of protected speech. He was on the side of Hobby Lobby in the 2014 challenge to the contraceptive mandate of the Affordable Care Act.

"It has been the greatest honor and privilege to serve our nation in the federal judiciary for 43 years, 30 of those years on the Supreme Court," Kennedy wrote in a statement announcing his retirement.

Without him, the court will be split between four justices appointed by Democratic presidents and four who were appointed by Republicans.

In late April, The New York Times editorial board pleaded with Kennedy to stay on for as long as possible.

"How can we put this the right way? Please don't go," it said, noting that Kennedy's position, "between the four liberal justices and the four conservatives," makes him "the most powerful member of the most powerful court in the country" for the past decade.

The New York Times was hardly alone in speculating when Kennedy would announce his retirement.

Russell Shaw, freelance writer and author, wrote in a column published in late May by the Arlington Catholic Herald, newspaper of the Arlington Diocese in Virginia, that if Kennedy does retire this year, "there's sure to be a protracted, unusually ugly struggle in the Senate over confirming a successor."

"President Trump is committed to naming a pro-life justice, as he did last year with Justice Neil Gorsuch," he said. "Then it will be up to Senate Majority Leader Mitch McConnell to do all he can to get the successor confirmed before the November elections — that is, while Senate Republicans are still sure of a slim Senate majority."

Shaw also noted that the description of Kennedy as a conservative is "accurate enough on some matters, but where the social issues are concerned, Kennedy, a Catholic, has been anything but conservative, instead playing a key role in defending legalized abortion and conferring constitutional status on same-sex marriage."

Boris Heersink, assistant professor of political science at Fordham University in New York, said Kennedy's retirement "guarantees a strongly conservative Supreme Court for the time being," stressing that Trump is "likely to nominate a hardline conservative in line with Neil Gorsuch."

In an email, Heersink said the court has already made a set of "clear conservative judgments" this session which is likely to "continue for the foreseeable future."

"It is even conceivable that this produces a small majority in favor of overturning Roe v. Wade," he added.