In Las Vegas as before, spontaneous shrines bring healing after horror 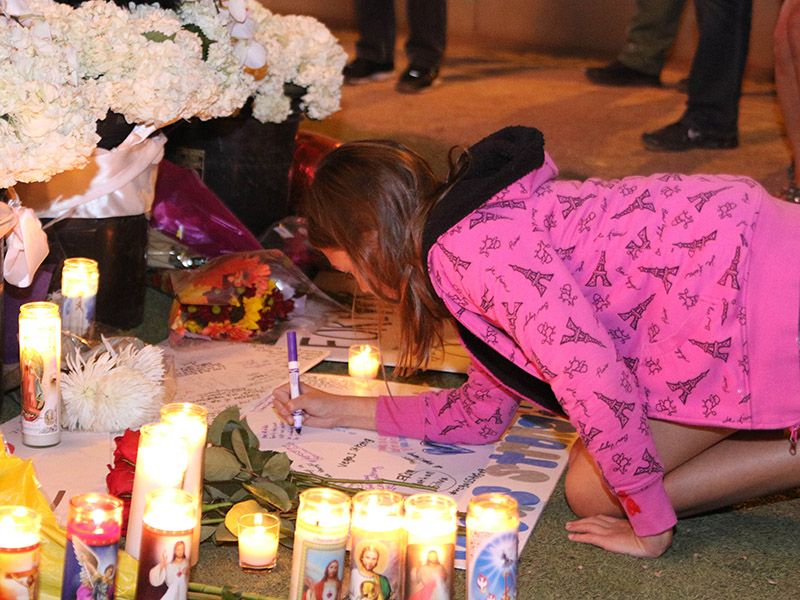 Memorials and tributes in the aftermath of the mass shooting on the Las Vegas Strip in Las Vegas on Oct. 1, 2017. (RNS)

LAS VEGAS — Dressed in black with purple streaks in her hair, 18-year-old Tanya Calibuso walked around the makeshift shrine that had popped up on a traffic island since the Las Vegas shooting, pausing for long moments to read, look and reflect.

There was a cowboy hat, a blue bandana, an angel, a can of Coors. And more candles, photos, flowers, cards, flags and balloons than anyone wants to count.

"It gives you a reality of the situation when you see the faces and the things people write," she said, stopping at a group of devotional candles — Jesus, Mary and St. Anthony illuminated through the glass.

Hoots and horns came from revelers on the Strip, a million neon lights flashed brighter than the candles, but the 18-year-old was fixated.

"When you hear of mass shootings in other states, you notice it, but you don't really understand it," she said. "I don't think I feel better, but it helps me understand how bad it was and how their deaths are real."

Within hours of the Oct. 1 mass shooting that killed 58 people and wounded hundreds, mourners and the merely curious, from here and far away, started coming to this memorial. It stands a stone's throw — or a high-powered bullet's range — from the Mandalay Bay hotel, where the gunman fired from before taking his own life.

Some of the visitors just look. Others feel the need to leave something behind. All are pilgrims, of a sort.

"I take off my hat to all my brothers and sisters who were there Sunday," one person wrote in black ink on the brim of a white cowboy hat. "Never forgotten."

"God bless to all of the victims of Route 91," another wrote in orange chalk on blackboard, referring to the concert venue that became a shooting gallery. "Your missed. RIP."

And a number of people paid tribute in colored markers on a whiteboard. One wrote: "Jesus is coming!! Be ready!!! There will be no more death."

Scholars who study these spontaneous shrines — and there are at least half a dozen shrines in Las Vegas — say they have become expected, even necessary, when tragedy strikes. Teddy bears, candles and flowers usually make up their bulk, but each one is unique and worth preserving, they say.

“There seems to be this deep desire for people to bear witness at a place where something happened and acknowledge their witness by leaving something there,” said Jan Ramirez, chief curator at New York's 9/11 Memorial and Museum. “They want to say, ‘I have come, I care, I will never forget and this is going to be integrated into my life.' They will forever remember coming to this shrine."

With thousands of mementos in her museum's care, Ramirez has a theory about them.

"The stuff is a surrogate for the people who are lost," she said. "We can’t preserve the victims. But we can preserve the drawing or the card dedicated to them. It is a surrogacy of saving."

Steve Round, 47, patrols the traffic island like the former Army sergeant he is.

He relights sputtered candles, rearranges scattered flowers and makes sure the mylar balloons don't get away, or — as happened once — catch fire.

On Friday night, five days after the shooting, he was marking almost 72 hours straight at the shrine. A Vegas resident, he was on the Strip when Paddock began firing, and has found it hard to leave.

"I am stuck on being pissed off and I can't do anything," he said. "I'd rather be at the blackjack table getting my butt handed to me, but we had 59 people die."

In the past week, he has seen the victims' relatives, friends and total strangers cry, fall to the ground or just stare. He's had time to think about why people feel drawn to this spot.

"I think the majority of people don't know what else to do," he said, standing just off the curb, relying on his reflective orange T-shirt to keep him safe from three lanes of traffic.

"It's like your whole world is shattered. I am personally devastated. I have lost friends in combat, been to funerals, but this I don't understand."

A Baptist, he adds, "Nothing against the man upstairs, but I really think he was missing on this one."

The need to mark death is nothing new. When the biblical Rachel dies on the road to Bethlehem, her husband, Jacob, erects a pillar on the spot. But scholars trace contemporary spontaneous shrines to the opening of Washington, D.C.'s Vietnam Veterans Memorial in 1982.

That site — a black granite gash on the otherwise green Washington Mall — immediately brought pilgrims who left tokens under the names of the dead — medals, baseball gloves, photographs, baby booties and more. The National Park Service has cataloged about 400,000 of them.

“The Vietnam Memorial set the ground rules for this” phenomenon, Ramirez said. “Visitors made their own meaning. They connected with that war that was so far away by leaving these deeply personal, sometimes inscrutable offerings.” 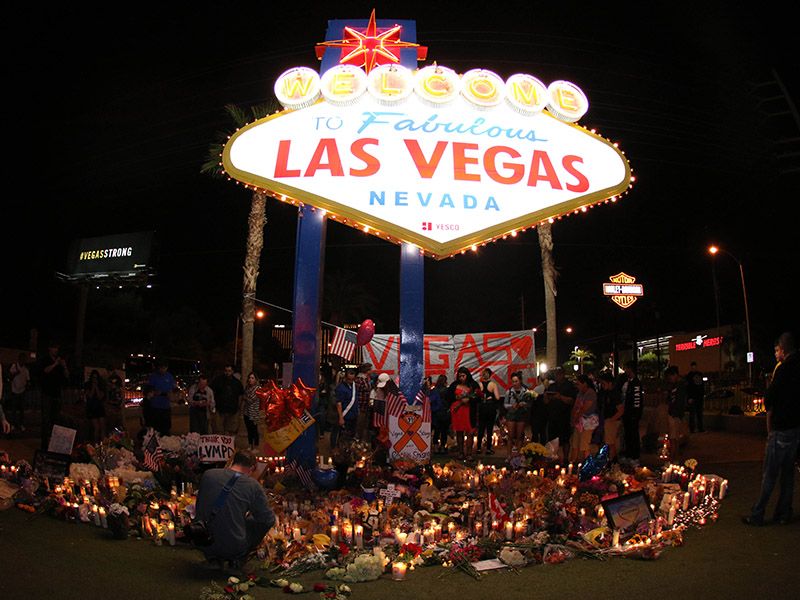 Memorials and tributes in the aftermath of the mass shooting on the Las Vegas Strip (Las Vegas Boulevard) in Las Vegas on Oct. 1, 2017. (gotpap/STAR MAX/IPx 2017)

Then the 1995 Oklahoma City bombing happened, and a fence hastily erected around the rubble of the Murrah Federal Building, where 168 people, including 19 children, were killed, turned into a depository of teddy bears, children’s drawings and crosses.

From there it snowballed. Spontaneous shrines appeared after the Columbine massacre, the shootings at Virginia Tech, Sandy Hook, San Bernardino and Charleston. They also materialized after the death of Princess Diana and the terror attacks in London, Madrid, Paris, Nice and at Ground Zero after the Sept. 11, 2001, attacks.

'It's just a drop in the ocean'

Ross MacDonald was a freelance properties master for movies and television when tragedy came in 2012 to his town, Newtown, Conn.

After Adam Lanza shot and killed 20 children and six adults at Sandy Hook Elementary School, hundreds of thousands of things — from votive candles to a grand piano — were placed outside or sent to the town.

MacDonald was among the residents who volunteered to sort and photograph what came to be called "the stuff."

"I think it did help," he said. "It was really moving to know that everyone knew how the town felt and wanted to make us feel better."

But even after photographing a thousand items, MacDonald still cannot explain the motivations behind their appearance.

"I think the horror hits you when you hear stories about the individual victims," he said. "There is this feeling of impotence. You don’t know the person but you feel a connection and you just need to do something. So you bring a flower or a candle. I think you know it is just a drop in the ocean but you feel like you have to do something." 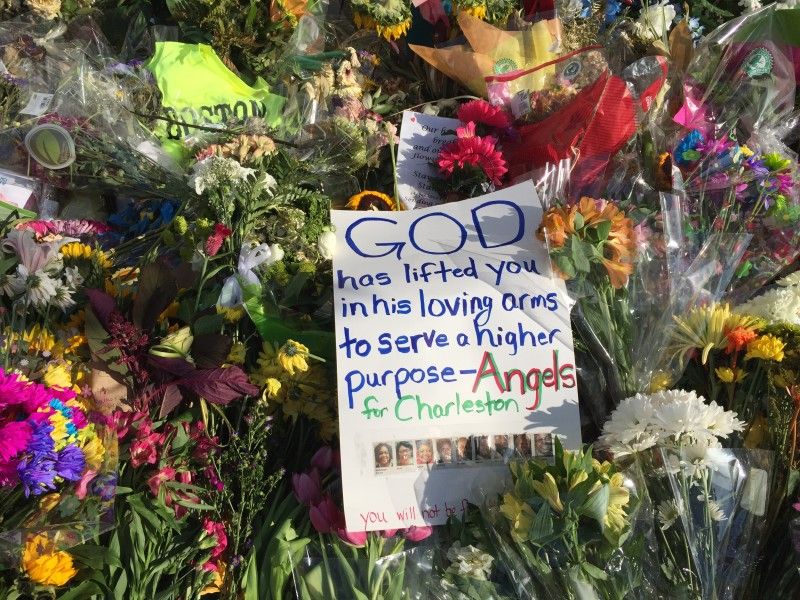 A tribute to the nine victims of the June 17, 2015, shooting at the Emanuel AME Church in Charleston, S.C. (RNS photo/Jerome Socolovsky)

'This is just what you do'

Twenty years ago, Sylvia Grider was an anthropologist at Texas A&M University who specialized in children's ghost stories.

Then, in the early morning of the fall semester, a 60-foot bonfire, erected before a big football game, collapsed and killed 12 students and injured 27 more.

Traumatized students gathered at the site, leaving school memorabilia, handwritten notes, posters, artwork and more. Grider, a folklorist, felt compelled to save what was left.

The project consumed the next decade of her career. She has studied every subsequent spontaneous shrine and sees them as "an incredible, profound expression of our shared humanity."

Grider frequently uses religious language to describe the shrines. People make "pilgrimages" to them, they leave "relics," they become "sacred spaces." But they are not expressions of any one religion.

"Yes, they are made of crosses and rosaries and pictures of saints, but those artifacts do not make these shrines Christian," she said. "It is deeper than that. The artifacts are just what's available when you stop at the Walgreens or the Walmart first. They are a way we create a sacred space at these places that is common to everyone."

That space becomes sacred, in a way, even to nonbelievers. "I have talked to people who are avowed atheists who say they put a cross to mark the spot," Grider continued. "They say, 'I am not religious, but this was my brother, this was my sister, this was my fiancee. This is just what you do.' ”

Grider cites a Spanish phrase — "pasó por aquí" (he passed this way) — which the explorer Don Juan de Oñate etched in stone in 1605, referring to himself, in what is now the El Morro National Monument in New Mexico. 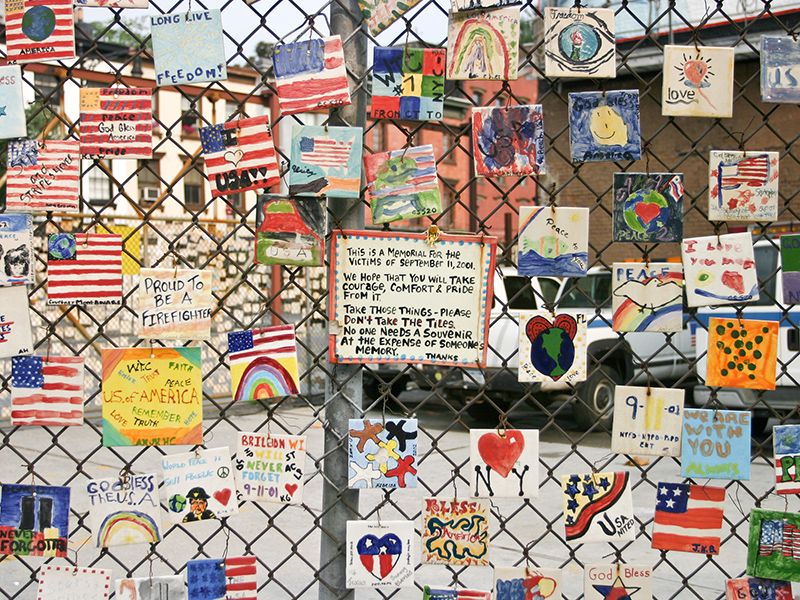 Series of hand-painted tiles, dedicated to the victims of the Sept. 11, 2001, attacks, on the fence of a car lot in New York City. (David Iliff)

"It expresses, 'I shared this. I offer my soul up to this,' " Grider said. "And that is why people come to the sacred place and fall to their knees and weep."

'This is part of me'

Steven Centlivre, 43, drove nine hours from his home in Vail, Colo., to see the shrine at the Vegas traffic island. He knows why he came.

He once lived in Las Vegas, had two kids and a job at the Mandalay Bay. There was a divorce, estrangement, trouble, trouble, trouble. But his daughter, he thought, might have been at that concert.

"I raised her country," he said. "I had to come here to get peace of mind. But she is not here."

"This is part of me," he says, taking in the giant billboards, the glowing hotels, the carefully tended palm trees that stand like tropical refugees in this desert. "Vegas. It is deep. Even though you leave it, it doesn't leave you."

People | In Las Vegas as before, spontaneous shrines bring healing after horror

Editorial: Now is the time for action on guns