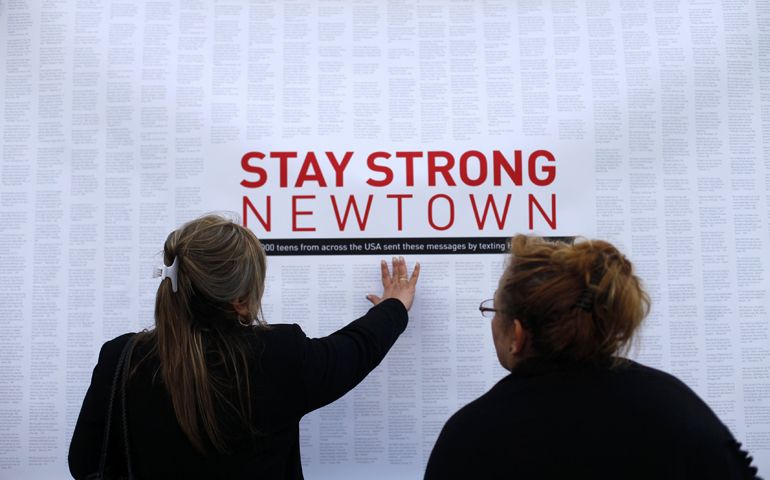 Women look at a printout of text messages Dec. 18, 2012, at a memorial site in Newtown, Conn. (CNS/Reuters/Joshua Lott)
This article appears in the Gun Violence feature series. View the full series.

With the approach of Saturday's one-year anniversary of the shootings at Sandy Hook Elementary School in Newtown, Conn., faith groups are making a concerted effort to convince Congress to pass legislation expanding background checks to those purchasing guns at gun shows and online.

"In light of the tragedy in Newtown -- and in Aurora, Tucson, Fort Hood, Virginia Tech, Columbine, Oak Creek, and so many more -- we know that no more time can be wasted," the letter says. The group said in addition to prayers for those affected by the violence, "we have a moral obligation to keep guns out of the hands of people who may harm themselves or others."

According to the letter, "research demonstrates that in the 16 states and Washington DC that already require background check for private sales, gun trafficking is 48 percent lower, the rate at which women are killed with a gun by an intimate partner is 38 percent lower, and the gun suicide rate is 49 percent lower. Congress must act to ensure that background checks are required to protect innocent lives nationwide."

Vincent DeMarco, national coordinator of Faiths United, said in a release that expanded background checks are needed nationwide "and you can see that the faith community -- which represents tens of millions of members across the country -- wants real policy change."

On Friday, a separate faith-based effort, Faiths Calling, will conduct an interfaith call-in day to end gun violence. More information on where to call can be found at www.faithscalling.org. The call-in initiative also urges passage of bipartisan measures to expand background checks to all gun purchases. The groups sponsoring the event include a range of Protestant and Jewish organizations, and among the sponsoring Catholic groups are Network, the social justice lobby led by Sr. Simone Campbell; the Leadership Conference of Women Religious, which represents the majority of women's religious orders in the country; the Conference of Major Superiors of Men; the Catholic Health Association; and the Sisters of Mercy of the Americas.

A service of mourning and remembrance for gun violence victims will be held from 3:45 to 5 p.m. Thursday at the Washington National Cathedral. To get more details about the vigil or to make a donation to support the effort, go to wwww.rally.org/vigil. Reservations to attend the vigil can be made online. The vigil will also be live-streamed.

The event is co-sponsored by The Newtown Foundation in remembrance of the 20 students and six adults who died after Adam Lanza opened fire at Sandy Hook Elementary School on Dec. 14, 2012. Earlier in the day, Lanza had shot and killed his mother, Nancy. He committed suicide as first responders arrived at the school.

Though the organization makes clear that it is "not involved in any legislative or electoral activities," it does ask those interested to send "Remember Newtown" holiday cards (available through www.newtownaction.org/remember) as a way of reminding Congress of those killed in the Newtown shooting as well as the more than 30,000 killed in the U.S. by guns during the last year.

Donations to the all-volunteer organization are used to help gun violence victims and survivors to "find their voices and tell their stories."

'Transformation' or no, Gillibrand's candidacy is underwhelming

We need more than 'thoughts and prayers'; we need gun background checks