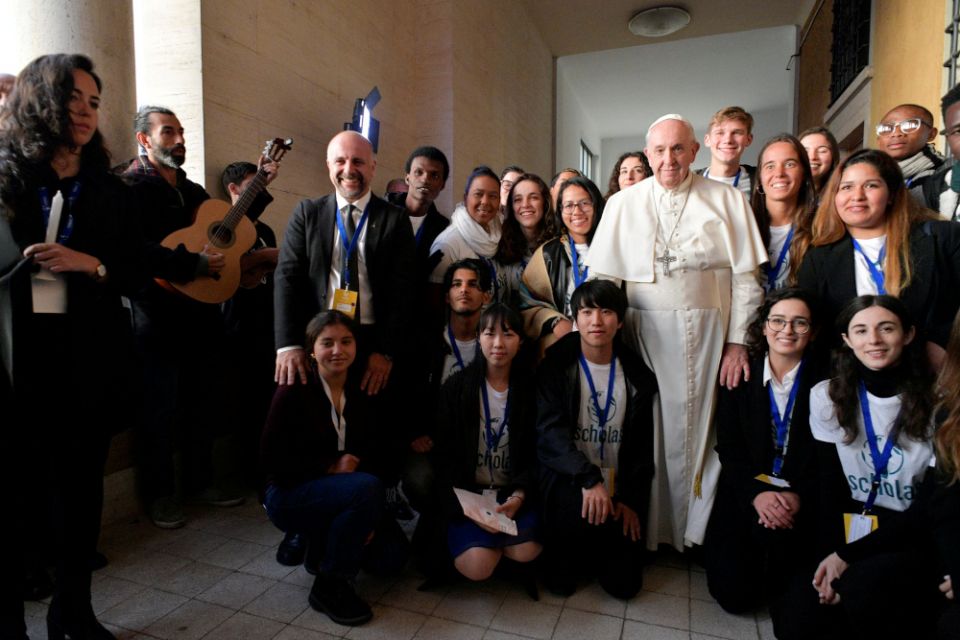 Pope Francis poses after he inaugurated the new headquarters of Scholas Occurrentes, the Vatican's foundation that works to link technology and the arts for social integration and world peace, in Rome Dec.13, 2019. (CNS/Vatican Media)

Los Angeles — As Pope Francis inaugurated the new headquarters of the Scholas Occurrentes foundation Dec. 13 in Rome, an archbishop, an auxiliary bishop, a mayor and Catholic high school students gathered in Los Angeles for the launch of the foundation's U.S. headquarters.

A live video conference connected the two cities on a day that was special for another reason: The pope was celebrating the 50th anniversary of his ordination to the priesthood.

The aim of Scholas Occurrentes is to encourage social integration ‎and the culture of encounter among high school students through the arts, sports and technology. Latin for "schools for encounter," Scholas Occurrentes was launched by Francis in Argentina 2001 when he was archbishop of Buenos Aires. As pope, he made it a foundation in 2013.

"Holy Father, greetings from Los Angeles," said Archbishop Jose Gomez. "We are very happy to be with you on this very special day for you as your celebrate your 50th anniversary of priestly ordination. In the name of the whole United States family, we send you our prayers and our greetings on this important day. Congratulations! Ad multos annos."

"This is also a very special day for us because we are proud and happy that Scholas Occurrentes is establishing the U.S. headquarters right here in Los Angeles, the City of Angels," the archbishop of Los Angeles archbishop continued.

He introduced to the pope "our mutual friend," Los Angeles Mayor Eric Garcetti, who will be a board member of Scholas Occurrentes USA, and Los Angeles Auxiliary Bishop David O'Connell, who also will be on the board.

The Scholas Occurrentes' new U.S. headquarters, its 14th worldwide office, will be on the 10th floor of the Los Angeles Archdiocese's building on Wilshire Boulevard.

Scholas opened an office in Japan in November, and there are national outposts now in Argentina, Colombia, Spain, Haiti, Italy, Mexico, Mozambique, Panama, Paraguay, Portugal and Romania. Scholas Occurrentes is active in 190 countries integrating 500,000 schools and educational networks of all denominations.

In his remarks, Garcetti thanked the pope for his hospitality and his friendship when he had an audience with the pontiff last August.

"Thank you so much for who you are and congratulations on your 50th anniversary of bringing the Word and the hope to this world," he said. "We celebrate here this anniversary with you in Los Angeles, we look forward to welcome you one day to this City of Angels. You truly are an angel here in this world for us today."

Garcetti said Los Angeles is excited to have the Scholas Occurrentes program, and noted that the room he was standing in was "full of students who are excited to talk about the world, the environment, this moment, how in a time of division we bring unity."

Two students who participated in a Scholas pilot program in Miami this summer also addressed the pope, Jorge Avalero, who is from Miami, and Ashley Garcia, a junior at Bishop Conaty-Our Lady of Loretto High School in Los Angeles.

The 100 young people in the pilot program developed proposals to address problems in their communities, such as violence and weapons, and to encourage participation and engagement in social, civic and political issues.

Jorge thanked the pope for bringing the Scholas opportunity to the United States "and for exploding that bubble of conformity that is very common in the United States. And for teaching us to come out of our comfort zone and that we learn more about different cultures and who we are inside."

Said Ashley: "Holy Father, on behalf of all the students of the Archdiocese of Los Angeles, we congratulate you on the 50th anniversary of your ordination to the priesthood. We are grateful for your ministry and your outreach to the youth."

"We pray for God's continued blessings of wisdom and strength as you lead our church for many years to come," she added. "Thank you Pope Francis for your faithful service to all God's people."

Then all the students gathered for the video conference held up signs, a number "50" balloon and shouted, "Happy anniversary Pope Francis!"

The program encourages "disinhibition in the good sense of the word," meaning "that there be nothing that prevents you from expressing yourself. And this has one word that expresses everything: poetry," Francis said. "What Scholas triggers in each one is poetry. Poetry is, as it says in the etymology of the word, creativity."

In an interview with Angles News, the Los Angeles archdiocesan news outlet, Paul Escala, the archdiocese's school superintendent, said Garcetti's commitment to Scholas "speaks volumes to the fact this isn't just a church-led initiative, but is a collective responsibility of the city that goes beyond the church's opportunity to expand beyond the parish and schools."

"It's great to see children animated by the Holy Father and his leadership," he added. "One of the blessings we have is a Holy Father who understands how to speak to the youth, the challenges they face as the next generation inheriting a world that seemingly appears divided and under extraordinary stress."

One of "the incredible gifts" Francis brings, he said, is "listening to the voices of the young and identifying those opportunities for the amplification of their voices."