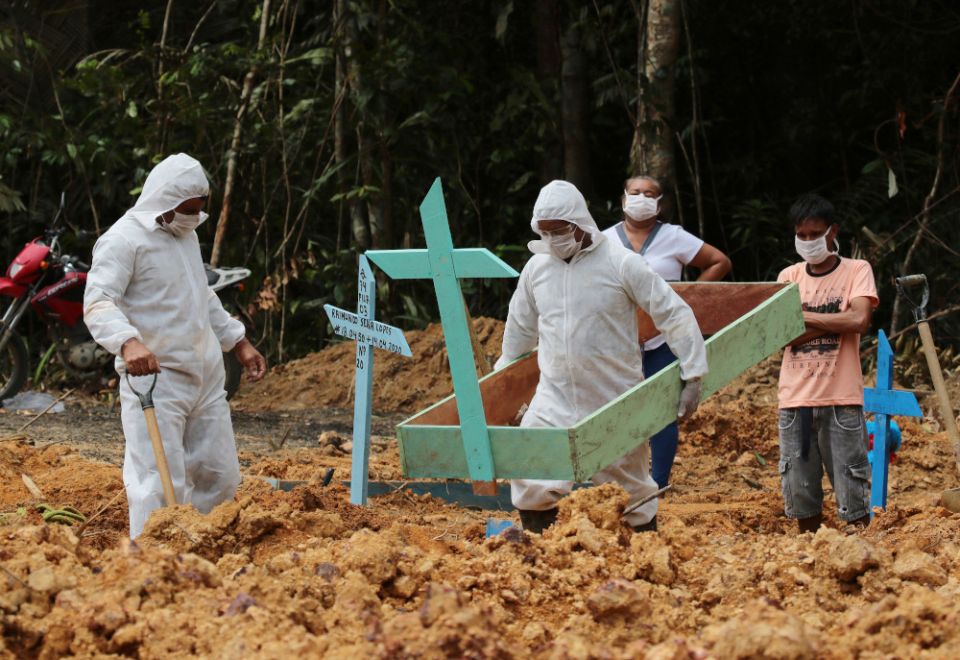 In this April 16, 2020 photo, funeral workers in protective gear prepare the grave of a woman who is suspected to have died of COVID-19 disease, at the Nossa Senhora Aparecida cemetery, in Manaus, Amazonas state, Brazil. Gravediggers buried 60 people that day, about triple the pre-virus average, according to a cemetery official. (AP/Edmar Barros)

Washington — The global health crisis is taking a nasty political turn with tensions worsening between governments locked down to keep the coronavirus at bay and people yearning to restart stalled economies and forestall fears of a depression.

Protesters worrying about their livelihoods and bucking infringements on their freedom have taken to the streets in some places. A few countries are acting to ease restrictions, but most of the world remains unified in insisting it's much too early to take more aggressive steps.

In the United States, there is clear evidence of the mounting pressure. The Trump administration says parts of the nation are ready to begin a gradual return to normalcy. Yet some state leaders say their response to the pandemic is hindered by a woefully inadequate federal response.

After insisting the country’s virus testing system was without fault, President Donald Trump announced April 19 evening that he would be using the Defense Production Act to compel increased manufacturing of testing swabs — one of several products governors have been begging the president to help them acquire. White House officials will also be holding a call April 20 with the nation’s governors to help walk them through where to find supplies, he said.

Trump also remained defensive, however, vowing that there were enough swabs to go around. “Swabs are easy,” the president said, bringing one to his news briefing and waving it in front of reporters.

That came hours after Washington state's Democratic governor, Jay Inslee, accused Trump of encouraging insubordination and “illegal activity" by goading protesters who flouted shelter-in-place rules his own administration has encouraged.

“To have an American president to encourage people to violate the law, I can’t remember any time during my time in America where we have seen such a thing,” Inslee told ABC's “This Week.'' He said it was ”dangerous because it can inspire people to ignore things that actually can save their lives.”

Trump supporters in several states have ignored social distancing and stay-at-home orders, gathering to demand that governors lift controls on public activity. The largest protest drew thousands to Lansing, Mich., on April 15, and others have featured hundreds in several states. The president has invoked their rallying cry, calling on some states with Democratic governors to “LIBERATE,” and he defended the demonstrations April 19 night, saying “these people love our country. They want to go back to work.”

“We’re sending completely conflicting messages out to the governors and to the people, as if we should ignore federal policy and federal recommendations,” Hogan said on CNN's “State of the Union.”

Shutdowns have disrupted economic, social, cultural and religious life and plunged the world into a deep economic slump unseen since the Great Depression. Tens of millions of workers have lost their jobs and millions more fear they'll be next.

With the arc of infection different in every nation and across U.S. states, proposals have differed for coping with the virus that has killed more than 165,000.

China, where the pandemic began, has lifted travel and other restrictions, but customer traffic has been slow to return. 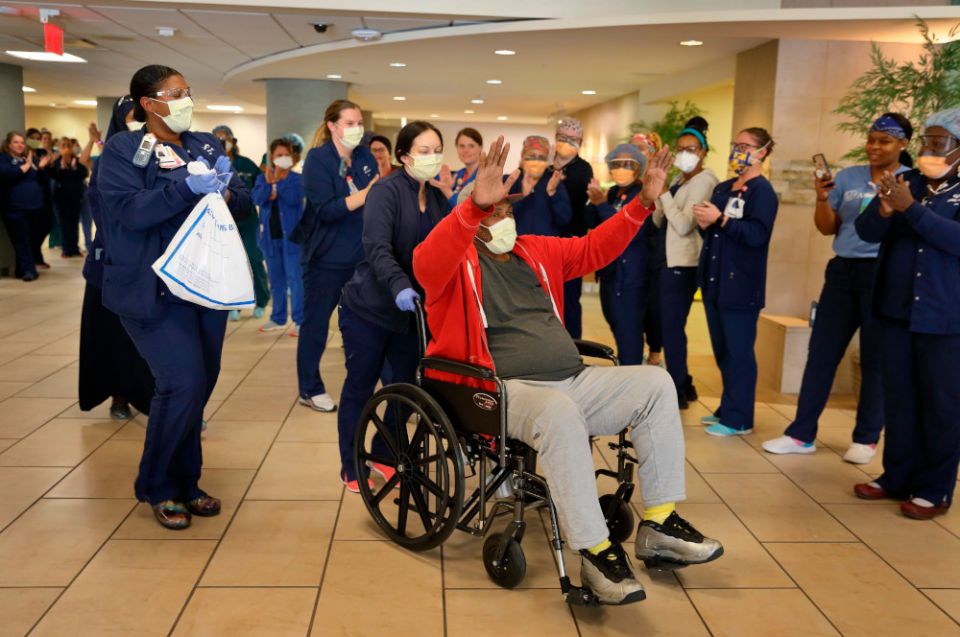 Maurice Cooley is wheeled out of SSM Health St. Mary's Hospital to the cheers and applause of nurses in Richmond Heights, Mo. on April 19, 2020. Cooley is the 100th COVID-19 patient discharged from the hospital since the start of the coronavirus epidemic. (AP/St. Louis Post-Dispatch/David Carson)

Germany is enforcing social distancing but on April 20 intends to begin allowing some small stores, like those selling furniture and baby goods, to reopen. Spain said children can leave their homes beginning April 27. Albania planned to let its mining and oil industries reopen April 20, along with hundreds of businesses.

The death toll in the U.S. was near 41,000 with more than 758,000 confirmed infections, while the global total has surpassed 2.4 million, according to a tally by Johns Hopkins University. The European Center for Disease Control said the continent now has more than 1 million confirmed cases and almost 100,000 deaths from the coronavirus.

The true figures are likely significantly higher since mild infections can be missed, testing is limited and many countries have been too overwhelmed by illnesses to effectively count them or have tried to underplay the extent of their outbreaks.

The International Monetary Fund expects the global economy to contract 3% this year. That's a far bigger loss than 2009′s 0.1% after the global financial crisis. Still, many governments are resisting pressures to abruptly relax lockdowns.

“We must not let down our guard until the last confirmed patient is recovered,” said South Korea's President Moon Jae-in.

In Britain, which reported 596 more coronavirus-related hospital deaths on April 19, officials also said they’re not ready to ease efforts to curb the virus's spread. U.K. minister Michael Gove told the BBC that pubs and restaurants “will be among the last” to leave the lockdown, which is now in place until May 7.

France’s health agency urged the public to stick to social distancing measures that have been extended until at least May 11 and Prime Minister Edouard Philippe said people could be required to wear masks on public transportation, and suggested no one plan faraway summer vacations even after that.

Trump is pushing to begin easing the U.S. lockdown in some states even before his own May 1 deadline, a plan that health experts and governors from both parties say will require a dramatic increase in testing capacity. But Vice President Mike Pence insisted the country has “sufficient testing today” for states to begin working toward the initial phases of reopening their economies.

California Gov. Gavin Newsom, a Democrat, said his state can’t begin lifting restrictions until it is able to test more people daily. “Right now, we’re not even close as a nation, let alone as a state, to where we should be on testing,” he said.

Economic concerns that have increasingly collided with measures to protect public health are popping up throughout the U.S.

Business leaders in Louisiana have slammed New Orleans Mayor LaToya Cantrell for imposing restrictions they say have unfairly shuttered economic activity outside the city. A full-page ad in The Times-Picayune/The New Orleans Advocate newspaper urged an easing of lockdowns, even as the paper featured nearly nine pages of obituaries in a city hard-hit by the virus.

States including Texas and Indiana have announced plans to allow some retail and other activity to resume. But in New York, where the daily coronavirus death toll hit its lowest point in more than two weeks, officials warn that heavily effected areas aren’t ready to ease shutdowns of schools, businesses and gatherings.

Geopolitical and religious tensions stretching back centuries have further complicated the global response to the virus. But Jordan’s King Abdullah II said the outbreak has made “partners” out of “our enemies of yesterday, or those that were not friendly countries yesterday — whether we like it or not.”