For the first time, a majority of Americans has voiced concern about violence against Jews, polling by the Anti-Defamation League shows.

While 52 percent of Americans surveyed said they are disturbed about such violence, an even higher percentage – 76 percent – said they are concerned about violence against Muslims.

The ADL commissioned two surveys to determine the mood of the country, one in October 2016 and another from January through February, as part of its ADL Global 100 project.

It found that more than 8 in 10 Americans — 84 percent — say it is important for government to be involved in combating anti-Semitism, an increase from 70 percent in 2014. 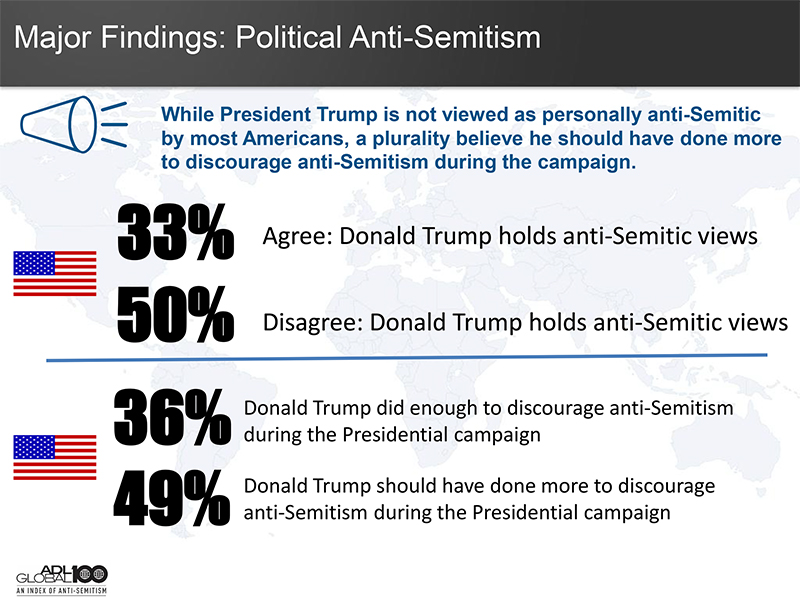 “While President Trump is not viewed as personally anti-Semitic by most Americans, a plurality believe he should have done more to discourage anti-Semitism during the campaign.” (Anti-Defamation League)

“The good news in this research is that today a large majority of Americans do not subscribe to common anti-Semitic stereotypes,” said ADL CEO Jonathan Greenblatt. “It’s also encouraging that a record number of Americans are concerned about violence against the Jewish and Muslim communities, and are troubled at how intolerance has infected our politics.”

The survey found a slight increase in Americans with anti-Semitic views, totaling 14 percent of the population. That figure, which was 12 percent in 2013, is based on responses to 11 questions that might indicate “anti-Semitic propensities.”

In a separate question, 30 percent of Americans said they believed that “Jews were responsible for the death of Christ,” an increase from 25 percent in 2013.

Researchers found that most Americans do not view President Trump as personally anti-Semitic but almost half (49 percent) said he should have done more to discourage anti-Semitism during the presidential campaign.

In July, then-candidate Trump tweeted a faux newsmagazine cover showing a photo of Democratic presidential nominee Hillary Clinton against a backdrop of hundred-dollar bills. On the right, in a red, six-pointed star, were the words “Most Corrupt Candidate Ever!” He later deleted the tweet after an uproar over the star, which was seen as an anti-Semitic use of the Star of David.

Many Jewish groups were also alarmed at Trump’s refusal during the campaign to call out David Duke and other white supremacists who spread anti-Jewish hatred.

More than two-thirds (68 percent) of Americans said they believed rhetoric in the 2016 campaign decreased tolerance and a respect for people of all religions and races. 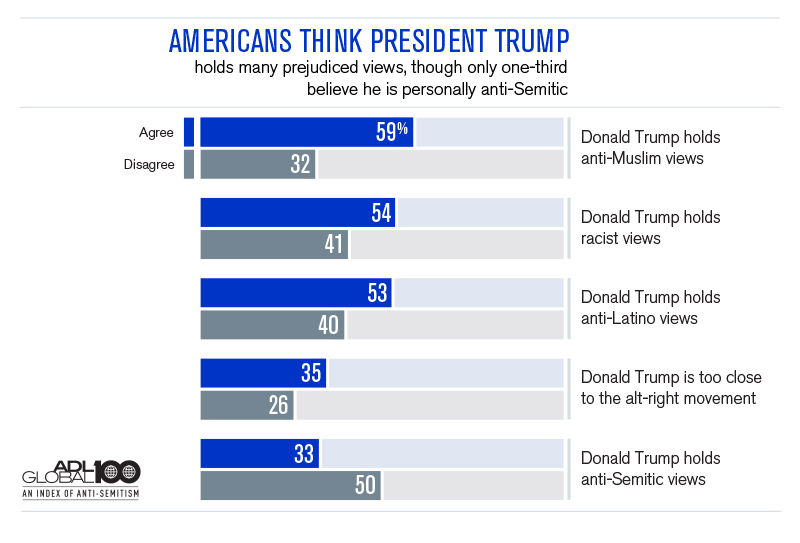 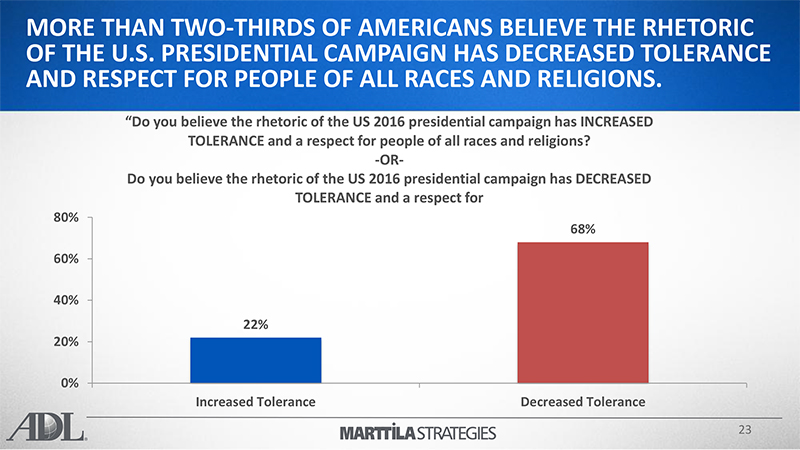 “More than two-thirds of Americans believe the rhetoric of the U.S. presidential campaign has decreased tolerance and respect for people of all races and religions.” (Anti-Defamation League)

Fifty-nine percent of Americans say Trump is anti-Muslim, 54 percent say he holds racist views, and 53 percent say he is anti-Latino.
More than half (53 percent) believe the U.S. has a moral obligation to permit more Muslim refugees to enter the country because of threats they face in their native countries, compared with 34 percent who say the nation has no such obligation.

People | Majorities of Americans concerned about violence against Jews, Muslims