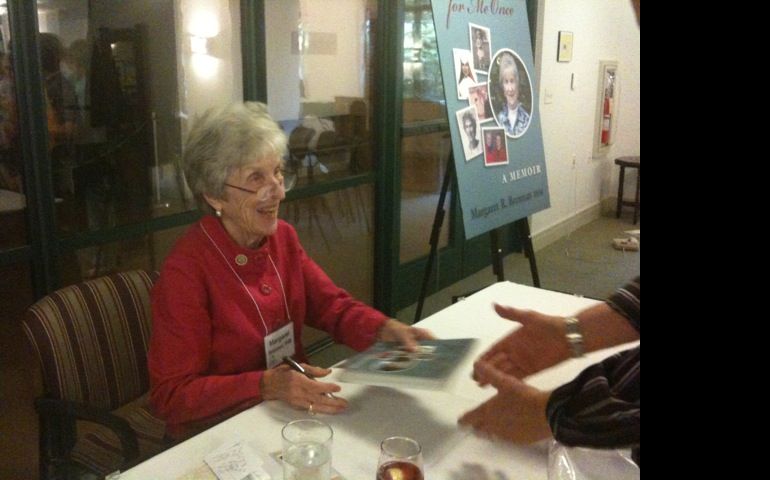 Sr. Margaret Brennan, signing her memoir, in 2009 (Courtesy of Sisters, Servants of the Immaculate Heart of Mary, Monroe, Mich.)

Editor's note: A longer, updated version of this story was added May 2, 2016: Sr. Margaret Rita Brennan's leadership has lasting influence for US women religious

Margaret R. Brennan, one-time president of the Sisters, Servants of the Immaculate Heart of Mary and president of the Leadership Conference of Women Religious in 1972, died Thursday morning at the motherhouse of her community in Monroe, Mich. She was 92.

Brennan, whose religious name was Sister Benedicta, was born in Detroit on Feb. 13, 1924. She entered the IHM Congregation in 1945, shortly after receiving her bachelor's degree from Marygrove College. Brennan later earned a doctorate in religion from St. Mary's College, Notre Dame, Indiana, in 1953, and a Master of Sacred Theology from Regis College, Toronto, in 1976. She served as professor of theology at Marygrove from 1953 through 1962, and then as novice director of her congregation, until her election as its president in 1966, a position she held for the next decade: she served as president of LCWR in 1972.

After her time in leadership, Brennan served for 25 years as professor of pastoral theology at Regis College in Toronto -- the first woman to hold that position. There, she became one of the institution's most distinguished and celebrated faculty members. She received numerous honors in her career, including four honorary doctorates and the 2010 Distinguished Leadership Award from LCWR.

Related: Brennan remembered as 'wonderful gift to the whole church'

Brennan is the author of numerous scholarly works, and of What Was There for Me Once: A Memoir (Novalis, 2009). A festschrift dedicated to her, Light Burdens, Heavy Blessings: Challenges of Church and Culture in the Post-Vatican II Era—Essays in Honor of Margaret R. Brennan (Franciscan Press), edited by Mary Ellen Sheehan, et al., was published in 2000. Brennan also contributed the chapter on IHM spirituality to the congregation's sesquicentennial history, Building Sisterhood (Syracuse University Press, 1997).

An outstanding mentor and spiritual director, Brennan touched the lives of countless women religious and others throughout her life. Upon learning of her death, Sr. Annmarie Sanders, Associate Director of LCWR, declared, "Margaret exercised extraordinary leadership for LCWR at a time of great tumult and change, particularly as she worked to bridge understandings between the leaders of the church and U.S. women religious. Early on she could see the significant potential that the call of Vatican II had for religious life and also understood well how challenging such renewal could be. As LCWR president, she articulated well how this life was being transformed and worked tirelessly -- and often at great personal cost -- to help others understand its evolving identity. Her impact on how religious life is lived today cannot be underestimated."

Brennan's Remembering will be on Sunday, May 1, at 3 p.m., and her funeral on May 2, at 10 a.m., both in the IHM Motherhouse Chapel in Monroe. The events will be livestreamed here.

[Margaret Susan Thompson is a professor of history at Syracuse University.]

The call to rescind the Doctrine of Discovery