During a Maryknoll sending ceremony, Sr. Maggie Mkenda, left, calls forth lay missioners and their children Dec. 8 at Annunciation Chapel of the Maryknoll Sisters in Ossining, New York. They have committed to three and a half years of service in Tanzania. (CNS /Courtesy of Maryknoll Lay Missioners)

Maryknoll, N.Y. — It's been a century since the first Maryknoll missioners went abroad as part of a society that sent Americans to preach the Gospel throughout Asia, Africa and Latin America, sometimes to imprisonment and martyrdom.

That initial group was comprised of four* young priests who went to China. On Dec. 8, a commissioning ceremony was held here for 13 new missioners, and three of their children, who received their symbolic mission crosses before embarking early next year to Bolivia, China, El Salvador, Haiti, Kenya and Tanzania.

This group ranged in age from 7 to 69 years old. With the exception of Maryknoll Sr. Armeline Sidoine, a native of Congo-Brazzaville who was missioned to China, the group is comprised of all lay people.

"The way you come will be the way they will receive you," said featured speaker Teresita Gonzalez, former director of the Office of Mission and Social Advocacy for the Archdiocese of Miami who now works at Belen Jesuit Prep School in Miami. Gonzalez offered a translation of a Haitian proverb, reflecting the Maryknoll view that missioners — the old designation of missionary has been largely retired — are sent as much to learn about how other cultures live the Gospel as to preach to others.

Maryknoll includes three sections: the lay mission program, the Maryknoll Sisters, and the Maryknoll Fathers and Brothers. There are also an affiliate program and mission partners, such as the Maryknoll Office of Global Concerns.

Many of the new lay missioners come to their work — which includes a three-month orientation at Maryknoll headquarters, language training if necessary and more than three years of service in the field — with international experience of their own.

Claire Veryser, the 7-year-old, is one of the current group going to Tanzania. She is Tanzanian and has lived there most of her life with her twin siblings, brother Justin and sister Abigail, and their parents, Stephen and Loyce Veryser. A highlight of the mission orientation for Loyce and the children was the construction of a snowman after a surprise November storm.

Stephen, a Michigan native, met his Tanzanian wife Loyce, a math teacher, while serving in a non-governmental organization there. He began as a Peace Corps volunteer and now serves as the lay mission coordinator for Maryknoll in Tanzania.

The mission to Tanzania will be a return to Africa for Kevin and Marilyn McDonough of Santa Clara, California, who met each other while serving in the Peace Corps in Gambia. She is a nurse and he is retired from the semi-conductor business. They have four children and seven grandchildren. 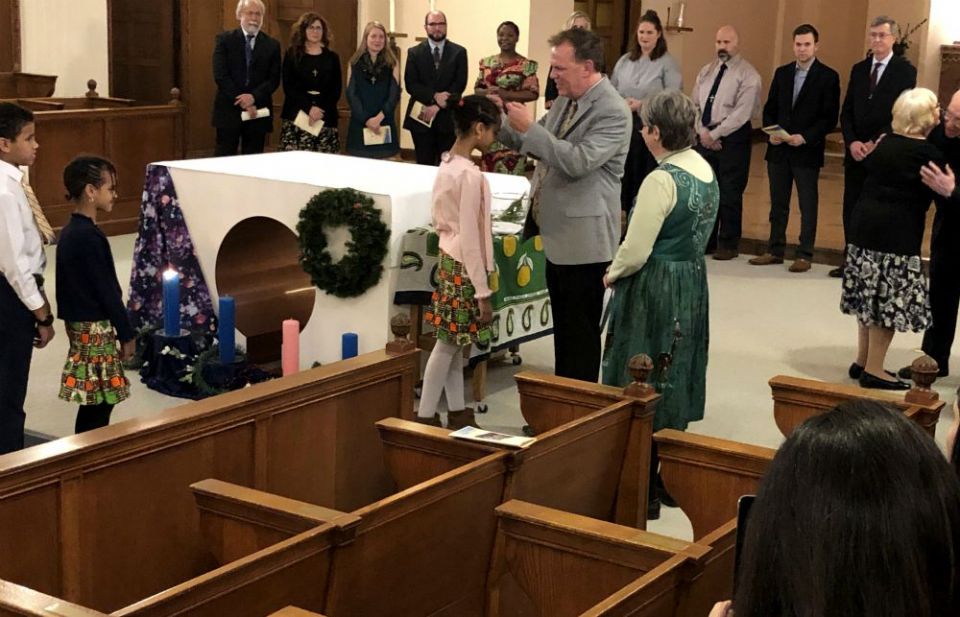 Others come to mission with a fresh perspective, as novice workers in developing countries.

Sam Janson graduated from George Washington University in the nation's capital last year after studying political science. A native of Amherst, New Hampshire, Janson will also work in Tanzania. Doing exactly what, he does not know, but is ready for what comes.

He will learn Swahili in Tanzania, after an orientation at Maryknoll that examined mission issues such as resolving conflicts, managing money, and communicating experiences back to the United States, as well as sessions on Scripture, church social teaching and intercultural awareness.

Janson said he has been inspired by Pope Francis' call for every baptized Catholic to be involved in mission. Working with Maryknoll, he told NCR, is part of his commitment to Catholic social justice teaching.

"Our social teaching does such a good job of championing the people Jesus said should go first," he said. "For me Christ is fundamental to how I connect peace and justice in the world."

Jose Luis Aguilar and Veronica Arriagada are a married couple being sent to Bolivia from their home in Chicago. They are parents of four children in their 20s. It is, in many ways, a homecoming back to Latin America for them: They met in the early 1980s when Aguilar, a native of Mexico, was serving as a lay missioner in Chile. They are completing the circle.

An empty nest helped inspire Jaynie Prior of Overland Park, Kansas, who will serve in El Salvador. Her two children are adults in their 20s, and she decided now is the time to pursue her dream of being a missioner after a career in counseling.

Thirty years ago, she was involved in a short-term health project in Nicaragua. That planted a seed, she said.

"My kids are landed. It's time for me to do my thing," she said. 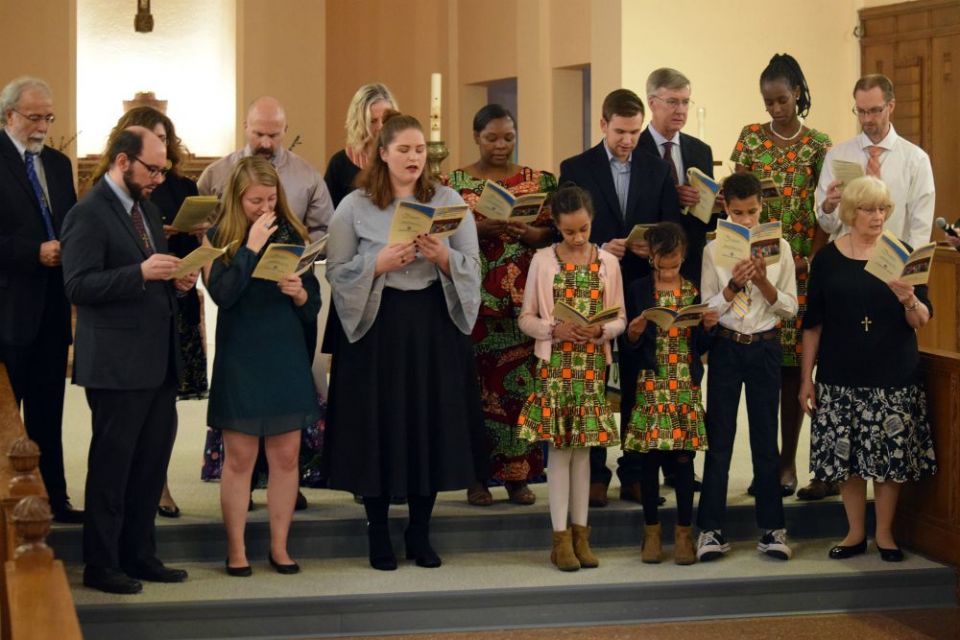 The 13 new missioners and the three Veryser children recite the Maryknoll commitment to three and a half years of service. (Courtesy of Maryknoll Lay Missioners)

Joe Miller, a native of St. Paul, Minnesota, and most recently a director of Christian service at Notre Dame College in Niles, Illinois,* is a former Jesuit seminarian who once served in Jamaica. He is being sent to Bolivia with Maryknoll.

His decision to join up with Maryknoll was reinforced during the difficult news cycle the church in the United States experienced this summer over ongoing sex abuse scandals.

On Aug. 6, the feast of the Transfiguration, Miller saw a metaphor that laypeople like himself could transform the church. "What an interesting time for laypeople to be entering into the church," he said, adding that at the time he began to feel, "This is my church and I am not leaving it."

Other missioners commissioned at the ceremony included Courtney Freshwater and Abby Belt.

Freshwater is from Ashland, Ohio, and will serve in Bolivia, too. She is a graduate of John Carroll University in Cleveland, where she majored in early childhood education. She previously served in Jamaica with the Passionist Volunteers International.

Belt, from Wichita, Kansas, will be going to Haiti. She is a graduate of Friends University with a degree in English language arts and has worked in young adult ministry.

Rich Tarro from Narragansett, Rhode Island, is going to Kenya.

Ted Miles, executive director of Mayknoll Lay Missioners, said there has been an uptick in interest in the program over the past few years.

"Some of that may be because of the response of Pope Francis, because of his discussion of our call for mission discipleship," said Miles, who worked in Belize with the Jesuits and overseas with Catholic Relief Services before coming to Maryknoll last year.

Participants go through a period of discernment and commit to three and half years of service. Many find what they are going to do only after getting to a country and discovering how the needs fits their skills. Missioners serve in areas such as pastoral ministry, health care and education, among others.

Miles said most of those expressing interest are at two stages of life: either just out of college or in the process of retirement. It's harder to find people in midlife because of their family and career commitments.

Maryknoll missioners are inculcated with the view that they are not the rescuers of their adopted countries. "God is already there in the communities that receive us," he said. "It is not a matter of us going in as a savior."

*This story has been updated to correct the number of priests in the original Maryknoll mission group, and to correct Miller's most recent job.

People | Maryknoll missioners learn how other cultures live the Gospel

Mormon church to ask its missionaries: How safe do you feel?

It's time to end male supremacy in the Catholic Church