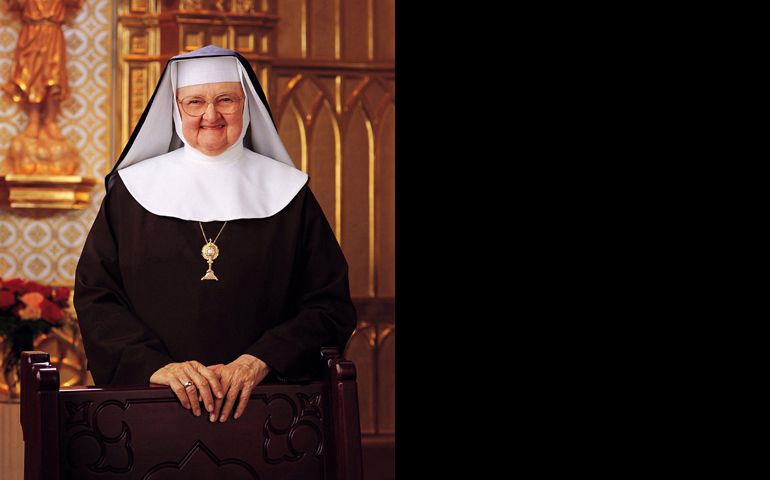 Mother Angelica, who spearheaded the founding of EWTN, in an undated photo. (CNS/courtesy EWTN)

HANCEVILLE, Ala. — Mother Angelica, who spearheaded the founding of the Eternal Word Television Network, has been placed on a feeding tube as she continues to battle lingering effects of two strokes she suffered 14 years ago.

A spokesman for her order, the Poor Clares of Perpetual Adoration at Our Lady of Angels Monastery in Hanceville, said the 92-year-old nun is doing as well as can be expected for someone her age who remains partially paralyzed.

"From what I'm told, it's not that she's completely unable to eat. It's assisting her to get the nutrients she needs," said Luke Johnasen, director of pilgrimages at the monastery.

Johnasen told Catholic News Service that she was fitted with the tube in recent weeks.

"She's had some up and downs the last few months," he said. "She's a fighter."

Johnasen added that Mother Angelica remained confined to bed, but that she acknowledges visitors to her room in the monastery.

"She's able to communicate with a squeeze of a hand, make gestures with her eyes. She acknowledges people when they're there. The nuns say she does sleep a lot," he said.

A native of Canton, Ohio, Mother Angelica launched EWTN Aug. 15, 1981. The initiative was met with doubt from television executives who felt there was little demand for Catholic programming. The networks' website reports that it transmits programs 24 hours a day to more than 230 million homes in 144 countries via cable and other technologies.

On her 92nd birthday in April, the sisters at the monastery said in a statement that Mother Angelica offers her suffering "all up for the church."

Fired EWTN host Gloria Purvis: 'I will never, ever, ever have regrets' for discussing race