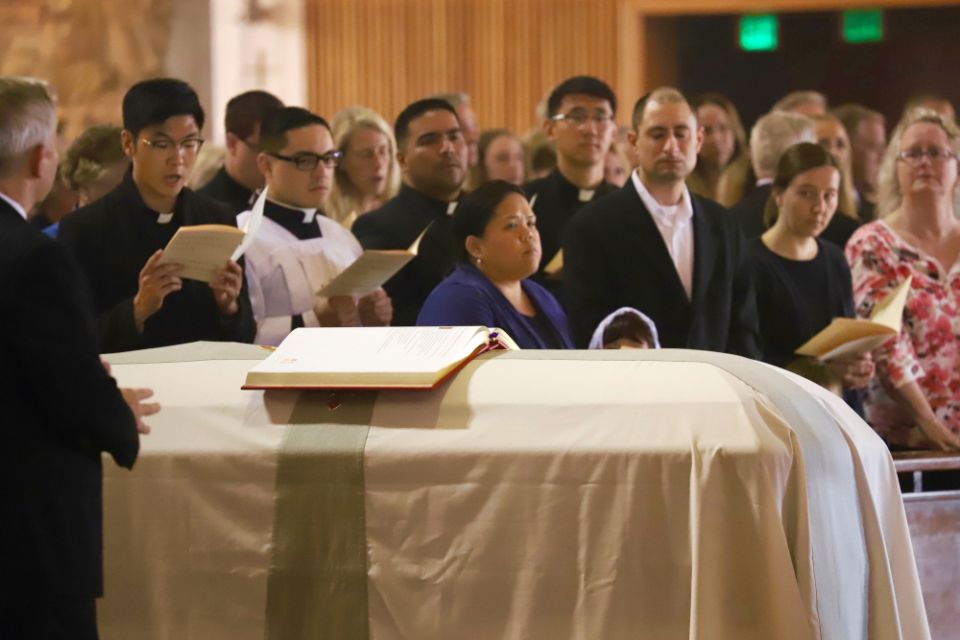 People pray during the funeral Mass for Auxiliary Bishop Robert F. Christian of San Francisco at St. Mary's Cathedral July 23, 2019. Bishop Christian died in his sleep July 11 in his residence at St. Patrick Seminary and University in Menlo Park, Calif., where he was rector-president. He was 70. (CNS/Catholic San Francisco/Debra Greenblat)

These appointments became necessary upon the untimely death San Francisco Auxiliary Bishop Robert Christian in July. Christian was president-rector of the seminary from Jan. 14 until his death July 11.

Cordileone said Donohoo has served the seminary with dedication for more than six years, most recently as vice rector and dean of men.

"He has a keen understanding of the challenges of diocesan priesthood and the spiritual and human formation required for a successful vocation," Cordileone said in a statement. "Fr. Donohoo is uniquely prepared and qualified to take on the leadership of this important institution at this time."

Donohoo's previous positions at the seminary include terms as dean of students and vice president of administration. In addition, in his home Archdiocese of Indianapolis he served as a judge in the metropolitan tribunal and led a successful program for continuing education for clergy. He also served as pastor of a number of parishes in the Indianapolis Archdiocese, including the Cathedral of Sts. Peter and Paul.

"I am grateful to the archbishop and board for their confidence in appointing me to serve in this role for my beloved alma mater," Donohoo said in a statement. "I hope, in collaboration with my current colleagues, to help form men of compassionate pastoral presence; men illuminated by sound theology, inspired by a continued deep personal encounter with Jesus Christ, issuing forth in generous service to all people."

Stoeppel joins the seminary as a faculty member and as its new vice rector. He was most recently vicar general of the Diocese of Tyler, Texas, and also was chairman of the Parish and Mission Assistance Program. He was president of Bishop Thomas Gorman Catholic School as well as pastor of Our Lady of Victory Catholic Church, a largely Spanish-speaking parish in the Tyler Diocese.

Stoeppel attended Holy Apostles Seminary in Cromwell, Connecticut, and holds a doctorate of sacred theology in the field of bioethics from Pontifical University of the Holy Cross in Rome.

St. Patrick's Seminary in Menlo Park has been forming priests for the West Coast region of the United States and the Pacific Islands since 1898.

The seminary has about 30 faculty and has historically served just over 100 students annually. Enrollment last year was 53 but had increased significantly from the previous year, according to a June 2018 report by the WASC Senior College and University Commission.