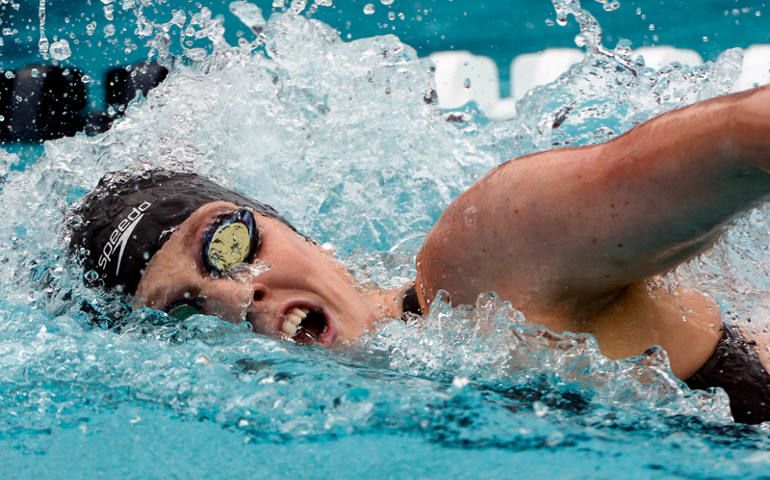 This article appears in the Rio Olympics feature series. View the full series.

A lot has changed since Missy Franklin earned four gold medals, a bronze and the title of "one of America's new sweethearts" at the 2012 Summer Olympics in London:

The swimming champ started college at the University of California-Berkeley (and took a year off to prepare for the Rio Games), reunited with an old swim coach and went professional.

She also has considered converting to Catholicism.

Franklin will compete Tuesday night in the semifinals of the women’s 200-meter freestyle, along with fellow American Katie Ledecky, and also in the 200-meter backstroke on Thursday at the 2016 Summer Olympics in Rio.

Franklin, 21, along with her U.S. Olympic teammate Clark Smith, graduated from Regis Jesuit High School in Aurora, Colo.. The school, she told Catholic News Service in August 2012, "brought God and so much meaning into my life."

She told CNS after the London Games that she was Protestant but considering converting to Catholicism. Growing up, she said, "my faith was not a very big aspect of my life."

In an interview with Beliefnet before the 2012 games, she said her family occasionally attended church services, where she felt "uncomfortable and self-conscious." But when she first walked into Regis, she said, she felt peace.

"Taking my first theology classes, going to my first Masses, going on my first retreats, I began to realize how important God is in my life and how much I love him and need him," she told CNS.

Heading into the London Games, she said she talked with God before, during and after practice and competitions, praying to him for guidance, thanking him for the talent he has given her and promising to be a positive role model for young athletes.

It's unclear where Franklin now worships, but she told NBC she volunteers with her church's children's ministry.

She recently retweeted a photo posted online by coach David Marsh showing Protestant evangelical Louie Giglio with several members of the U.S. women's Olympic swim team after leading them in devotions. Giglio is pastor of Passion City Church in Atlanta and founder of the Passion Movement, which includes a record label and conferences aimed at college-age Christians.

"Thank you to @louiegiglio for leading our devotional tonight. 'Compete -from acceptance not -for acceptance...'" the caption read.

She also has shared photos on Instagram of spending a "raging" 21st birthday swimming and studying the Bible and of her Bible journaling, coloring mountains and curly letters in the margins of Isaiah 54:10: "Though the mountains may crumble, you will not."

And she shared one other tidbit swimming has taught her about faith -- and her long, thick hair.

"I always just say God knew I was going to be a swimmer and gave me the hair for it. I don't know how my hair stays so healthy," she told People Magazine, laughing.

The Rio Olympics: Have fun