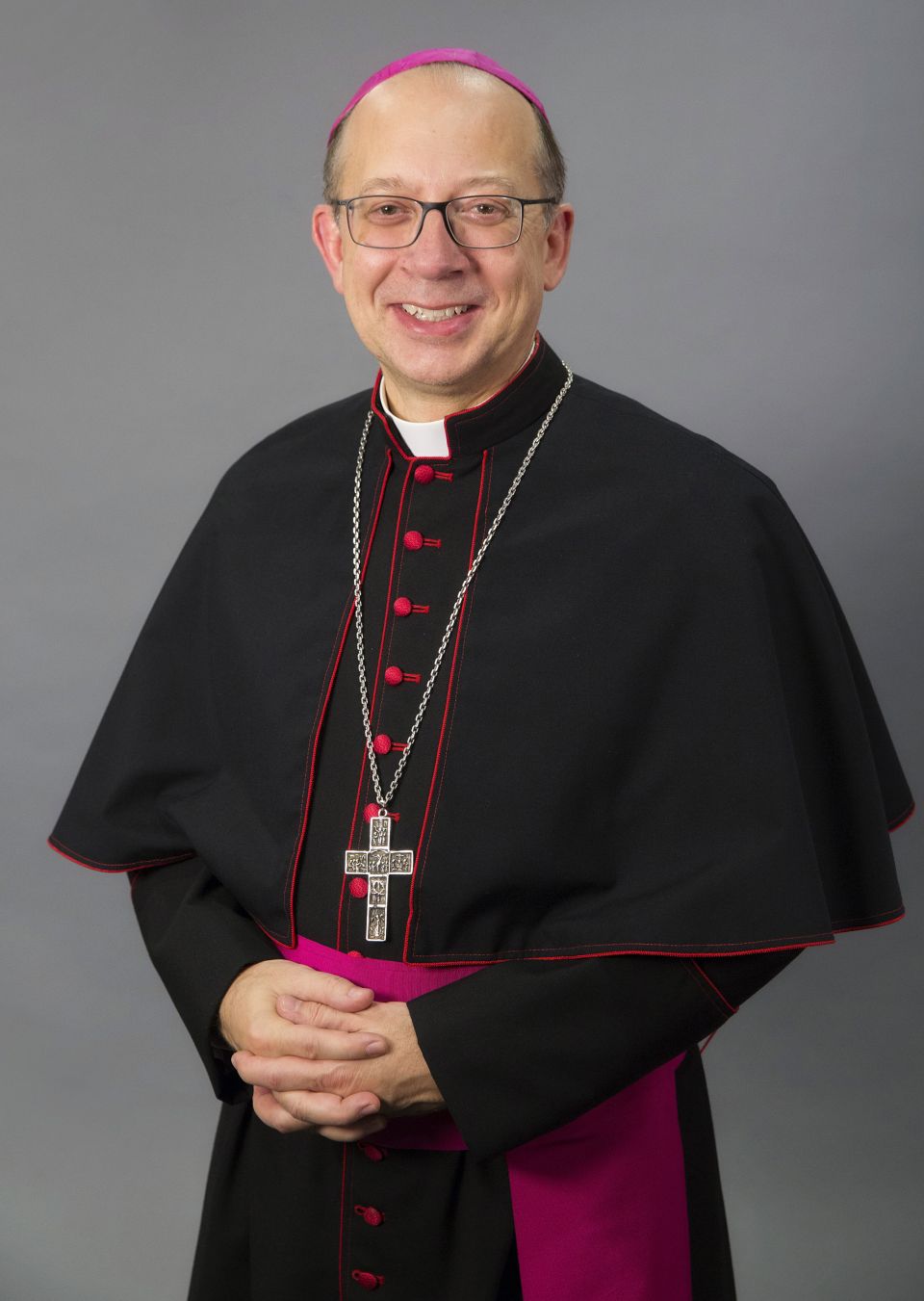 He succeeds Bishop Francis DiLorenzo, who was Richmond's bishop from 2004 until his death in August at age 75.

The appointment was announced in Washington Dec. 5 by Archbishop Christophe Pierre, apostolic nuncio to the United States.

Knestout's installation Mass will be celebrated Jan. 12 at the Cathedral of the Sacred Heart in Richmond.

Four hours after Francis named him Richmond's new shepherd, Knestout was introduced to the people of the diocese via a news conference at the pastoral center. The briefing also was livestreamed from the center.

After praying the Prayer to the Holy Spirit, the bishop thanked Francis for naming him to Richmond. This was followed by a heartfelt expression of gratitude to his 90-year-old mother, Caroline, and his late father, Thomas, and to his eight siblings.

He went on to recognize the three archbishops of Washington he has served: Cardinals James Hickey, Theodore  McCarrick and Donald Wuerl, the current head of the Washington Archdiocese.

He compared the 10 years he worked with Wuerl as "a graduate level education" that he said was "replete with a myriad of experiences."

Among those experiences were assisting in the hosting of Pope Benedict XVI in 2008 and Francis in 2015; participating in an archdiocesan synod and its implementation; and working with a diverse group of people who serve the Church.

Knestout also acknowledged Msgr. Mark Richard Lane for "his sensitive and wise pastoral leadership" during the four months following the death of DiLorenzo in which he served as Richmond's diocesan administrator.

"The faithful of the diocese are profoundly grateful for your service," he added.

He also acknowledged DiLorenzo as one "who served this diocese with devotion, steadfastness and a pastor's heart."

Knestout, a Maryland native, noted that he was born and formed in the faith in the Washington area, and "now I'm called ... to a new home, which I embrace with all my heart."

He said he planned to take to heart Francis' advice to U.S. bishops during the pontiff's 2015 visit to St. Matthew's Cathedral in the nation's capital, when the pontiff encouraged them to "be pastors close to people."

Knestout said he plans to take time to visit and get to know the people of his new diocese, which covers more than 36,000 square miles. It is comprised of 74 counties in the southern three-fifths of Virginia. It is one of two Catholic dioceses in the state; the Arlington Diocese covers Northern Virginia.

There are just over 222,000 Catholics in the Richmond Diocese, or 4 percent of the total population of more than 5.1 million. It is the nation's eighth oldest Catholic diocese and was founded in 1820.

Knestout noted the division affecting much of the country today -- which was a flashpoint in August in the Richmond Diocese when a white nationalist rally in Charlottesville, Virginia, erupted in violence. He said he would work to promote a spirit of unity and charity in the diocese so "that we see the dignity of each human being ... created in the image and likeness of God."

"Bishop Knestout carries with him the affection, respect and admiration of all of us with whom he so generously gave his time and efforts," Wuerl said in a statement.

Knestout has been an auxiliary of the Washington Archdiocese since 2008.

"During all of this time, he has demonstrated his pastoral skills, his commitment to the church and her teaching, and his devoted service to those entrusted to his care," the cardinal said.

He was ordained a priest for the Archdiocese of Washington June 24, 1989, and after two appointments as associate pastor at Washington area parishes, he served 10 years (1994-2004) as priest-secretary to Hickey, then head of the Archdiocese. He was executive director of the archdiocesan Office of Youth Ministry from 2001 to 2003, then priest-secretary to McCarrick, from 2003 to 2004.

Other assignments included being archdiocesan secretary for pastoral life and social concerns (2006-2008). He was named a monsignor by St. John Paul II in 1999, was appointed moderator of the curia in April 2007 and assisted Wuerl in overseeing administrative affairs.

On Nov. 18, 2008, Benedict named him an auxiliary bishop of Washington.

He has been a member of the Maryland Catholic Conference's administrative board and episcopal moderator of the American Catholic Correctional Chaplains Association.

From frontier to the present: New history traces US church and its people