Redemption, beauty of the family emphasized at Los Angeles march for life 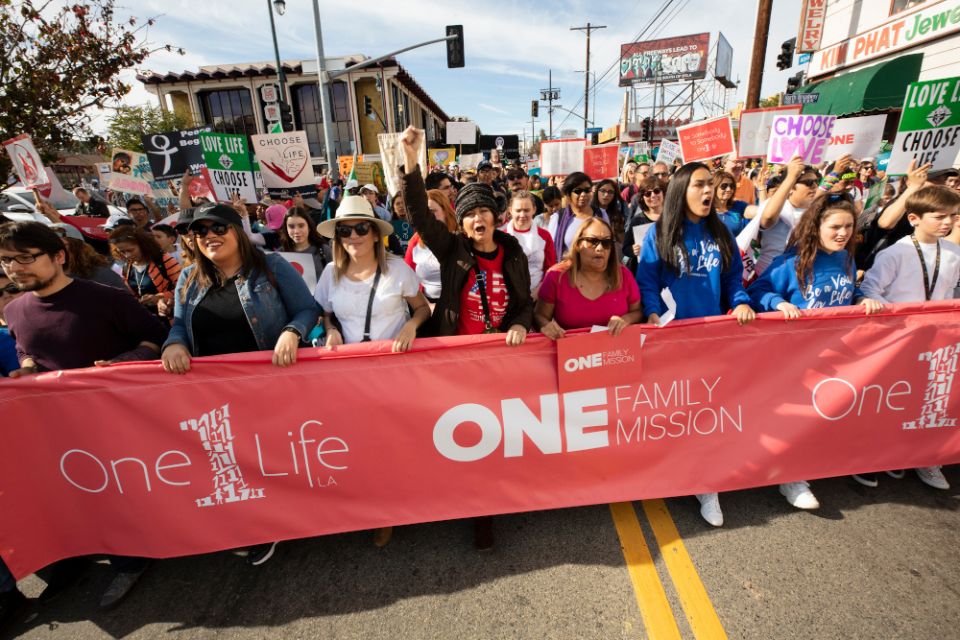 Pro-life advocates march during the OneLife LA rally Jan. 18, 2020, in Los Angeles. The event was one of many held across the country to mark the Jan. 22 anniversary of the U.S. Supreme Court's 1973 decision legalizing abortion. (CNS/Angelus News/Victor Aleman)

Los Angeles — As they waited in the shade next to the Pico House, watching the crowd swell in size in anticipation of the sixth annual OneLife LA Walk for Life outside La Placita in downtown Los Angeles, Monica and John Meier did their best to make their daughter, Veronica, as comfortable as possible.

Afflicted with cerebral palsy, Veronica, who will be 15 in March, clutched a stuffed animal for comfort, moving around in her wheelchair to the rhythm of the music at the nearby youth rally.

"She is our gift and our blessing," said Monica, Veronica's mother, a regional marketing manager for the Eternal World Television Network. "Every time I'm asked about how hard it must be to take care of her, I think of all the meaning she brings and the bridges she helps us to build in our family: unity, love, sacrifice, selflessness, and she pays it all back with a beautiful smile that fills our hearts."

Meanwhile, Veronica's younger brother, Thomas, stayed very active nearby, tossing around a small inflatable OneLife LA beach ball that, more than once, bounced somewhere off his mother as she spoke.

"He is also a blessing; he's very caring and helpful when his sister is having a seizure," Monica added with a patient smile.

The Meier family felt it was a natural place for them to be part of the thousands who walked in solidarity on the cool, sunny afternoon of Jan. 18. The walk took marchers through Chinatown to the Los Angeles State Historic Park, where the crowd gathered for a rally.

During the walk, parts of the group prayed the rosary — a large reproduction of a rosary made of yellow and white balloons — or sang aloud hymns such as "How Great Thou Art." Some chanted a refrain: "We are ... pro-life! Pro-life generation!"

From there, several hours of witness talks, guest speakers, and musical entertainment tied together the value of the human condition and reinforced the 2020 event's theme, "One Mission, One Family."

Organized by the Archdiocese of Los Angeles' Office of Life, Justice and Peace, OneLife LA was once again held the same day as — and just blocks away from — the Women's March, a demonstration in favor of a so-called "right" to abortion, which, like OneLife LA, is timed to coincide with the anniversary of the 1973 Roe v. Wade Supreme Court decision legalizing abortion. (The first OneLife event was held in 2015, while the first Women's March was in 2017.)

Contrary to initial media reports, the Los Angeles Police Department estimated that OneLife participants actually outnumbered those at the Women's March by several thousand this year, Angelus learned. (Angelus is the media outlet of the Los Angeles Archdiocese.)

The event attracted legions of pro-lifers from beyond Los Angeles, from as far as San Diego, San Bernardino and even Fresno.

"This celebrates life, and we're here to fight for life, for everyone — yes, for the unborn, but also for those with disabilities," added Monica, one of the hundreds of Catholics from Orange County who showed up along with their bishop, Orange Bishop Kevin W. Vann.

"Our society can try to make us believe life is only important and has meaning if it comes with some certain utility. That's not true. My daughter may not walk or talk but she is very special and we are here to defend that, the dignity of the human being."

Not far from a large red banner lining the park fence that simply read "Choose Love," Los Angeles Archbishop Jose H. Gomez spoke in English and Spanish about how those words resonate.

"We have a purpose in this world and that purpose is to love and to give life to others," said Gomez. "We are one family, and we have one mission. God is calling us to sanctify the world, to redeem this world through our works of love, through our deeds of compassion. 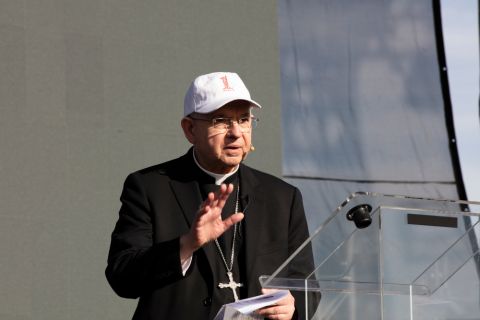 Los Angeles Archbishop Jose H. Gomez speaks to pro-life advocates during the OneLife LA rally Jan. 18, 2020, in Los Angeles. The rally and march was one of many held across the country to mark the Jan. 22 anniversary of the U.S. Supreme Court's 1973 decision legalizing abortion. (CNS/Angelus News/Victor Aleman)

"We cannot remain indifferent when we see all the suffering and injustice in the world. This is not God's way, this is not what God wants for his children.

"So God gave us this mission. He is calling us to oppose and overcome the evils we see around us. Our God will not let us rest until every human life is respected, and that begins with the life of the child who wants to be born."

That message of all human dignity also was reflected in the variety of nearly 20 booths that circled the park, ranging from assistance and information about foster care, sheltering the homeless, combating human trafficking, pregnancy services, care for creation, supporting immigrants and refugees, and ministering to families of the incarcerated.

Later, at the Requiem for the Unborn, the day wrapped up with a more solemn tone. Thousands packed the Cathedral of Our Lady of the Angels for the liturgy, a quarter century-old Catholic L.A. tradition, held in memory of all who died from abortion in the past year. Some 175 candles were lit during the Mass and placed in the window of the cathedral colonnade to remain on display.

"Every time a child dies in the womb, something of our humanity dies as well," said Gomez in his homily at the Mass. "And over these long decades of legalized abortion, we all know we have fallen short of what is expected of us."

Inviting faithful to pray "in sorrow and repentance," the archbishop emphasized that building a culture of life is a responsibility shared by all.

"The existence of abortion tells us that we still have not created a culture of life, that we still don't have a society or an economy that values the human person and the family as the essential foundation of society."

The mark of a younger generation involved in the pro-life movement could be seen in the many homemade signs and banners brought by families to the festivities.

Perhaps the one that got the most attention was the Star Wars-inspired creation of Fernando and Cynthia Rocha of Riverside: a picture of the viral sensation "baby Yoda" from the new hit Disney+ series "The Mandalorian," with the words "Save the babies" and "This is the way," a clever play on the main character's mysterious motto.

Keynote speaker Cyntoia Brown-Long, delivering a powerful 10-minute testimony at the end of the rally at the state park, told about how she survived 15 years in prison going back to the age of 16, arrested for killing a man who solicited her for sex. She was released from prison last August.

"For much of my life, I was imprisoned by the lie that my life did not matter," Brown-Long said. "And I'm here today to tell you that God freed me from it all.

"My road to redemption began with a community of people who showed me Jesus loves us irrespective of the labels society puts on us. He loves us despite the worst things we may have done."

Brown-Long added: "Every interaction we have is an opportunity for us to be a life of Christ. I hope our interaction today touches the heart of someone who may be feeling their life doesn't matter. You do matter. And God sees you.

"As you leave today, if you've taken nothing from anything I've said, I pray you recognize the power to be a light and making a choice to be a light to everyone you encounter. Because one life just may depend on it."

(Hoffarth writes for Angelus News, the multimedia news service of the Archdiocese of Los Angeles. Editor-in-chief Pablo Kay also contributed to this report.)

People | Redemption, beauty of the family emphasized at Los Angeles march for life