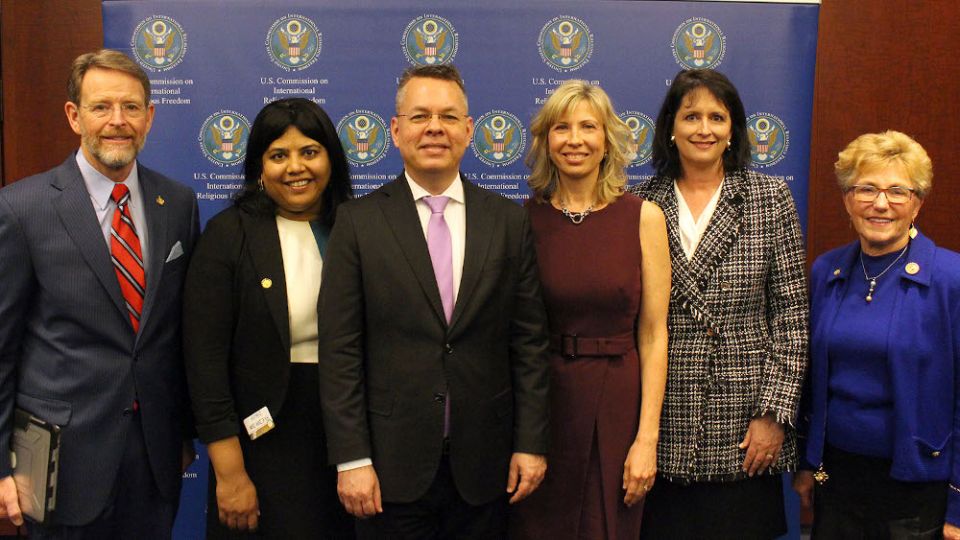 Washington — The U.S. Commission on International Religious Freedom, whose funding runs out on December  21, could be reauthorized by week's end if Congress passes an omnibus bill that includes a section recommending it stay in business.

Since its creation in 1998, the independent agency has drawn attention to repression of religious minorities across the globe and issued an annual report about the most egregious violators of religious liberty.

Recently, the organization has faced questions about travel by commissioners and has had two members step down.

The agency's funding — a proposed $3.5 million annually through 2022 — is part of a massive bill to finance the federal government's operations now being considered by Congress. That funding had been in jeopardy after a bipartisan panel had proposed new requirements for reporting of travel by commissioners of the watchdog group.

USCIRF Chair Tony Perkins told Religion News Service that the commissioners are satisfied with the current proposed language. He said all of them considered the earlier proposal to be "very problematic" and an attempt "to micromanage the commission."

Perkins is now hopeful USCIRF will carry on.

"I think we finally got to a good place," said Perkins. "As we've now established some clear objectives and goals, developed a solid strategic plan, we'll be able to show Congress that we're doing exactly what we were created to do 20 years ago."

The 1,700-plus-page bill, including about a dozen pages about USCIRF, was approved by the House on Tuesday but must be adopted by the Senate and signed by President Donald Trump before it becomes law.

Controversy has been swirling around the commission in the months since a bipartisan group including Sens. Bob Menendez, D-N.J., and Marco Rubio, R-Fla., made the proposal about the agency's reauthorization. One commissioner resigned in November. In a separate development, another commissioner resigned Tuesday after the Justice Department announced he had been indicted. 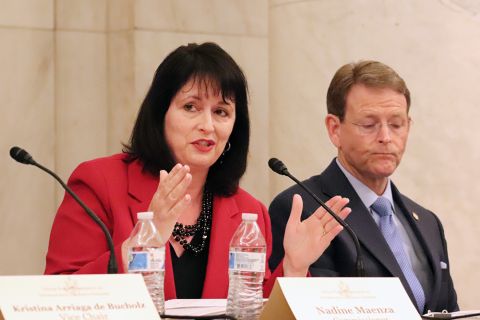 Nadine Maenza, left, commissioner of the U.S. Commission on International Religious Freedom, speaks at the April 29, 2019, event when USCIRF released its annual report in Washington, D.C. Commissioner Tony Perkins is on the right. (RNS/Adelle M. Banks)

Perkins said he was not aware of the resignation last month of Kristina Arriaga "until I read about it."

Arriaga noted in a Wall Street Journal column that she and another commissioner helped draw attention to the case of U.S. pastor Andrew Brunson, now freed after being detained in Turkey for almost two years, "without mounds of reports and permission slips." She later expressed concern that Congress would turn USCIRF "into a bureaucracy."

Isaac Six, a former staffer at USCIRF who now works at Open Doors USA, responded to Arriaga in a letter to the Journal, claiming the former commissioner "mischaracterizes" the reauthorization effort. He said the proposed attempts at increasing transparency and accountability "might marginally increase commissioners' workloads."

Perkins said he and the other commissioners received an email Tuesday from Ahmad "Andy" Khawaja, a commissioner appointed in 2018, stating that he would no longer serve.

The Justice Department announced earlier this month that Khawaja, the founder of online payment service provider Allied Wallet, was among eight people charged with concealing "excessive campaign contributions" during and since the 2016 presidential election. He was charged with 32 counts in an indictment that listed offenses including making false statements and causing the filing of false records.

"He advised the commissioners he was stepping down," Perkins said. "I don't know really any more about it than that."

If the legislation passes, the remaining commissioners, who are appointed by presidents and members of Congress of both major political parties, will be required to notify each other about speaking engagements on behalf of the commission. The legislation also calls on them to share their speeches in advance of such engagements and to clarify when they are speaking as a private citizen that they are not representing the views of the commission.

The proposed statute also adds a new prohibition on accepting payments from non-U.S. sources for commission-related travel expenses and requires an annual report from individual commissioners about any travel abroad not paid by the commissioner, a commissioner's relative or the U.S. government. That report needs to include details about the travel, the costs of travel not paid for by an employer, and who paid for it.

The concerns about reporting travel came up a week after Commissioner Johnnie Moore traveled to Saudi Arabia on the eve of this year's 9/11 anniversary for a personal visit with Saudi Crown Prince Mohammed Bin Salman.

Perkins said he was not concerned about Moore's Saudi trip: "He paid for all of his own travel."

Perkins called the travel-reporting aspect of the legislation "broader than we would like." But he said commissioners can work with those requirements. 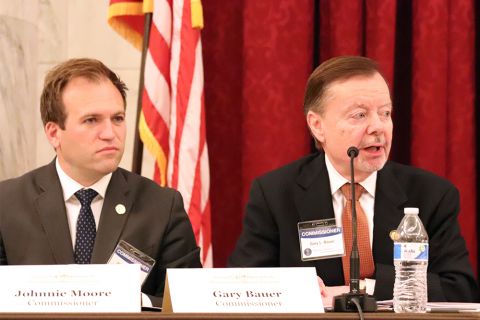 Even as USCIRF's commissioners and staff awaited word on the future of the agency, they have continued their calls for greater religious liberty. USCIRF expressed support for proposed legislation that opposes religious freedom violations in Ukraine by Russia and condemned the Saudi Arabian government for moving blogger Raif Badawi, a religious prisoner of conscience charged in 2012 with insulting Islam, to solitary confinement.

Religious freedom is under attack around the world