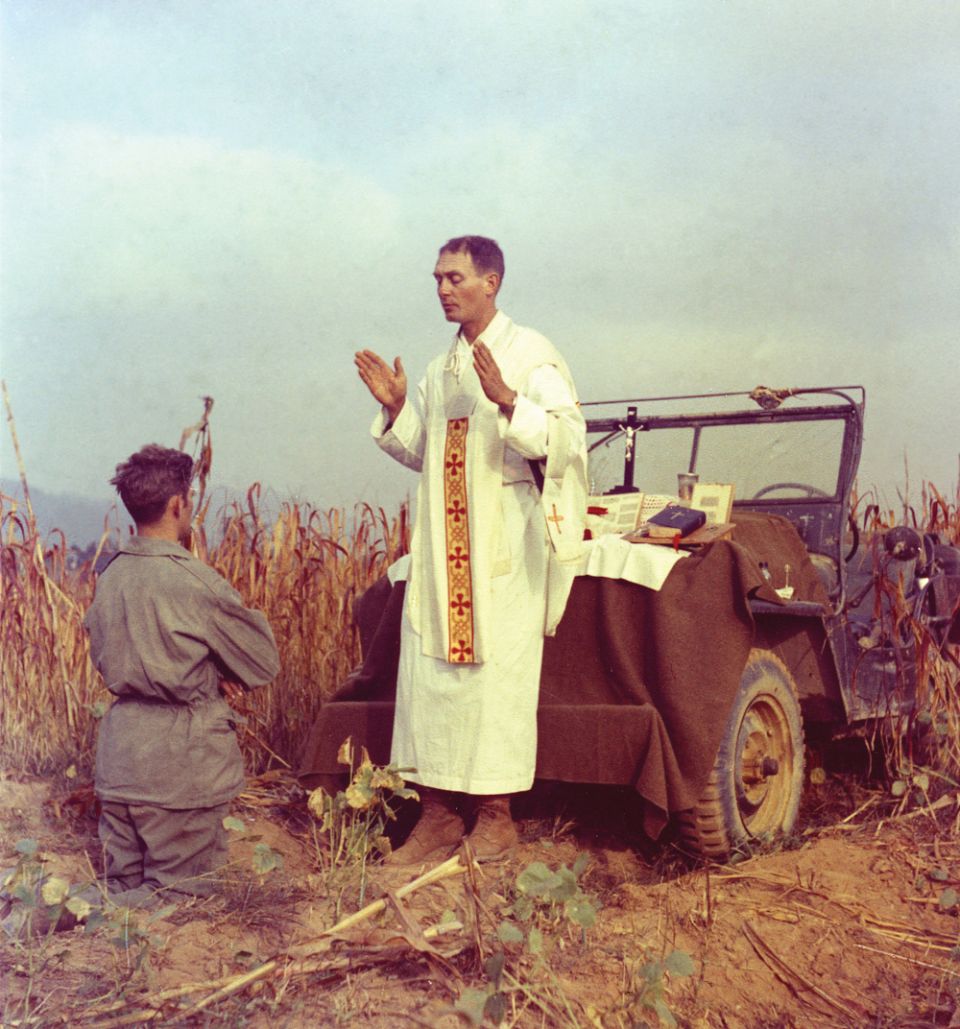 U.S. Army chaplain Fr. Emil Joseph Kapaun, who died May 23, 1951, in a North Korean prisoner of war camp, is pictured celebrating Mass from the hood of a jeep Oct. 7, 1950, in South Korea. He is a candidate for sainthood. (CNS photo/courtesy U.S. Army medic Raymond Skeehan)

Wichita, Kan. — A U.S. government forensic team announced March 4 it has identified the remains of Fr. Emil Kapaun, a priest of the Diocese of Wichita, who was an Army chaplain and died in a Chinese prisoner-of-war camp during the Korean War.

Kapaun, a native of Pilsen, Kansas, who is a candidate for sainthood, was an U.S. Army Chaplain in World War II and the Korean War.

"It was a joyful and exciting surprise for the Diocese of Wichita that Father Kapaun's mortal remains were recovered after so many years and we continue to look forward to his process of canonization in the future," said Wichita Bishop Carl A. Kemme.

The U.S. Defense POW/MIA Accounting Agency, known as the DPAA, made the announcement about the priest's remains. The DPAA recently concluded Kapaun was among the unidentified soldiers buried in the National Cemetery of the Pacific in Hawaii. Remains of many U.S. soldiers were moved from North Korean burial sites to Hawaii in the 1950s and the 1990s.

Details regarding the transport of the priest's remains and his final resting place are now being planned by the family.

Kapaun was known for risking his life on the battlefield during the Korean War to minister to the troops on the front lines. He was taken a prisoner of war in November 1950, enduring a brutal captivity where he continued to serve and bolster the morale of fellow prisoners. Kapaun died in a prison camp on May 23, 1951.

In a 2013 White House ceremony, he was awarded the Medal of Honor posthumously for his heroic actions on the battlefield. It is the United States' highest military honor.

In 1993, Kapaun was named a "Servant of God," signifying that his cause for sainthood could officially begin. A thorough investigation into his life was conducted by the Diocese of Wichita and the details presented to the Vatican Congregation for Saints' Causes in Rome, where his cause awaits review on the path to what the Wichita faithful hope will be his eventual beatification and canonization.

In general, two miracles through the intercession of the sainthood candidate must be verified; one miracle is needed for beatification and the second one for canonization.

The DPAA is an agency within the U.S. Department of Defense whose mission is to recover United States military personnel who are listed as prisoners of war, or missing in action from designated past conflicts, from countries around the world.