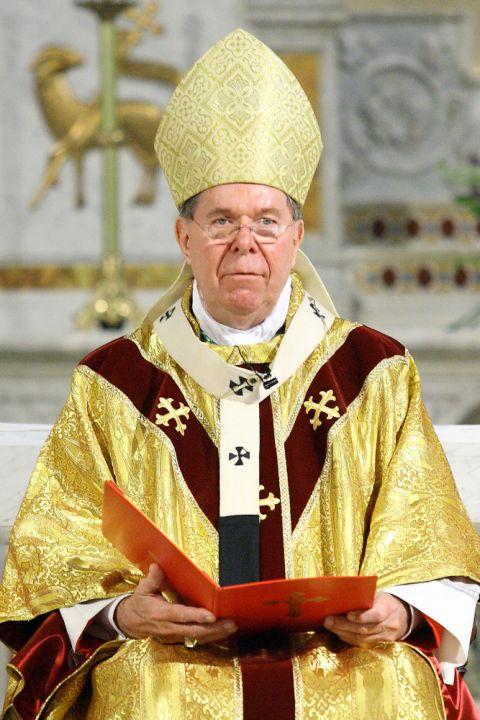 Retired Archbishop Daniel Buechlein of Indianapolis died Jan. 25 at age 79 in the infirmary of St. Meinrad Archabbey in Indiana. He is pictured in a 2011 photo. (CNS/Bob Nichols)

His death was reported by St. Meinrad Archabbey, where he had lived in retirement since 2011.

During his 19 years as archdiocese's spiritual and pastoral leader, Buechlein was especially interested in promoting Catholic education, young adult ministry and vocations to priesthood and the religious life.

Under his leadership, enrollment in the archdiocese's Catholic schools increased 30 percent to more than 25,000 students, reversing a 25-year decline. Innovative partnerships with the Lilly Endowment, campaigns to help fund new education initiatives, and the support of the business community led to improved student performance, which the U.S. Department of Education recognized by awarding 26 archdiocesan schools with Blue Ribbon awards for excellence.

Buechlein garnered support to keep Catholic schools in the central city open to serve students from low-income families and the growing immigrant population. He also led the effort to build two new grade schools in the city. He expanded the archdiocese's ministry to young adults by starting a Theology on Tap program, adding new college campus ministry programs, and creating new archdiocesan staff positions to provide outreach to young adults.

In 2003, Buechlein established the ministry of permanent diaconate in the archdiocese. The first class of 25 deacons was ordained in 2008.

He also founded the Bishop Simon Brute College Seminary in Indianapolis in 2004 to prepare college seminarians for major seminary. The seminary quickly attracted young men discerning a vocation to the priesthood and today has nearly 50 seminarians from 10 dioceses.

The archdiocesan Catholic Charities network and other social outreach ministries also expanded at the archbishop's urging. A 30,000-square-foot shelter for homeless families, the Holy Family Shelter, was among the new programs initiated.

After a series of budget deficits, Buechlein guided the archdiocese to firm financial footing and oversaw the dramatic growth of the Catholic Community Foundation, which is responsible for the archdiocese's endowments. During his tenure, 337 endowment funds with a value of more than $100 million were established.

He suffered a mild stroke in March 2011 and was admitted to St. Vincent Hospital in Indianapolis. On Aug. 1, 2011, he submitted his resignation to Pope Benedict XVI and two months later he moved to the infirmary at the monastery at St. Meinrad.

As his health permitted, Buechlein wrote a book, "Surprised by Grace: Memories and Reflections After 25 Years of Episcopal Ministry," which was published in 2013.

The archbishop was born in Jasper, Indiana, April 20, 1938, to Carl and Rose (Blessinger) Buechlein and given the name Marcus George.

He joined the Benedictines at St. Meinrad in August 1958 and professed simple vows a year later, taking the name Daniel. He made his solemn vows in 1962 and was ordained to the priesthood in 1964.

After ordination, the young priest spent two years in Rome, where he obtained a licentiate in sacred theology from the International Benedictine University of Sant' Anselmo.

Returning to Indiana in 1966, he served as assistant dean of students and chairman of the division of religion at St. Meinrad College. In 1971, he was director of the first national conference for seminary spiritual directors and coordinated the founding of the Midwest Association of Seminary Spiritual Directors.

St. John Paul II appointed then-Fr. Buechlein as the third bishop of the Diocese of Memphis, Tennessee, in 1987. Five years later he was named archbishop of Indianapolis.

Surviving are his brother, Charles, and nieces and nephews.