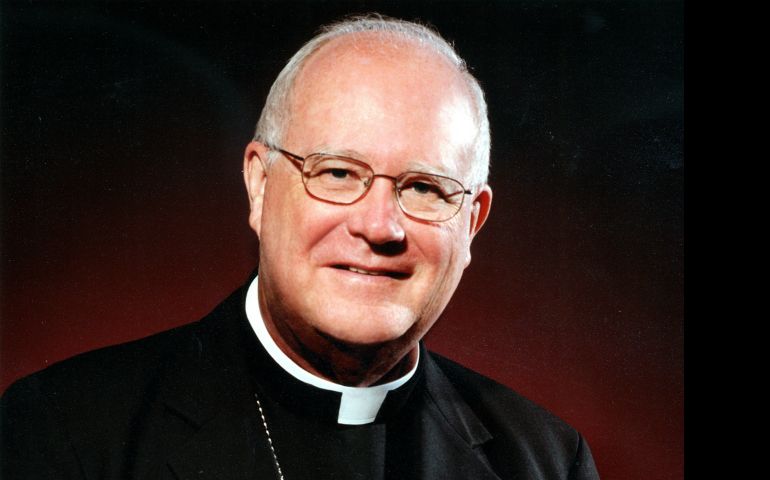 Retired San Francisco Archbishop George Niederauer, who died May 2 at 80, is pictured in this undated photo. (CNS/Catholic San Francisco)

He had been living at Nazareth House in San Rafael, California, for several months following a diagnosis of interstitial lung disease.

"Archbishop Niederauer was known for his spiritual leadership, intelligence and wisdom, compassion and humor, and was always focused on his responsibility to live and teach the faith," said San Francisco Archbishop Salvatore Cordileone in an announcement to the priests of the archdiocese.

"When he was named archbishop, he was asked what he would want the people of the Archdiocese of San Francisco to know about him," Cordileone said. "He answered, 'I've chosen the motto for my coat of arms, 'to serve and to give,' because I am convinced servant leadership in the church defines the role of the bishop.'"

Cardinal Roger Mahony, retired archbishop of Los Angeles, expressed sadness when he learned about the archbishop's death. "May God's warm embrace encircle him unto eternal life," he said.

"His engaging wit and humor became hallmarks of his open and loving personality, and he always had just the right words and the turn of a phrase to help defuse tensions and to uplift people, no matter what cloud was overhead," Mahony added.

The eighth archbishop of San Francisco, Niederauer succeeded seminary classmate and boyhood friend Cardinal William Levada, who was appointed by Pope Benedict XVI as prefect for the Congregation for the Doctrine of the Faith in 2005. Niederauer served in San Francisco from 2006 to 2012.

Born June 14, 1936, in Los Angeles, the only son of a banker-turned homebuilder and a homemaker, Niederauer attended Stanford University for one year before he entered St. John's Seminary in Camarillo, California. He was ordained to the priesthood April 30, 1962, for the Los Angeles Archdiocese.

He earned a doctorate in English from the University of Southern California in 1966, and spent 27 years as English professor, spiritual director, theology teacher and rector at St. John's Seminary and at Mount St. Mary's College in Los Angeles before his 1994 appointment by St. John Paul II as bishop of Salt Lake City. He also served as associate pastor from 1962 to 1963 in the Los Angeles area.

Coming to San Francisco, Niederauer left behind a Utah diocese in an area heavily influenced by the traditional values of the Church of Jesus Christ of Latter-day Saints to grapple with a number of controversial issues. In 2008, he supported California Proposition 8, which declared marriage as a union between one man and one woman. The proposition passed although it was later overturned by the U.S. Supreme Court. The San Francisco Chronicle reported at the time that a Latter-day Saints official credited Niederauer's outreach in support of the proposition with a commitment to grass-roots campaigning and $20 million.

In 2006, Niederauer closed the archdiocese's 99-year-old Catholic Charities adoption service, and in 2008 severed ties with a contracted adoption agency after Levada at the Vatican directed an end to all adoptions by same-sex couples.

In 2010, House Speaker and San Francisco Representative Nancy Pelosi contended in a Newsweek interview that freedom of conscience meant her advocacy for abortion rights was compatible with her Catholic faith. Niederauer disagreed in a January 2010 column in Catholic San Francisco, saying "while we deeply respect the freedom of our fellow citizens, we nevertheless are profoundly convinced that free will cannot be cited as justification for society to allow moral choices that strike at the most fundamental rights of others. Such a choice is abortion, which constitutes the taking of innocent human life, and cannot be justified by any Catholic notion of freedom."

Niederauer also defended religious freedom, opposing a proposed ban on circumcision by the Board of Supervisors, and actively supported immigrant rights.

In retirement, Levada and Niederauer shared a home on the grounds of St. Patrick's Seminary & University in Menlo Park, California. During his nearly five years of retirement, he regularly led retreats for bishops, priests, deacons, men and women religious and seminarians.

Niederauer served as the chairman of the U.S. Conference of Catholic Bishops' Committee on Communication, and as a member of the Pontifical Council for Social Communications. His book, "Precious as Silver: Imagining Your Life with God" was published in 2003. It explores biblical images of Christian life and reflects on spirituality centered on Jesus.

A funeral Mass was set for May 12 at St. Mary's Cathedral in San Francisco.