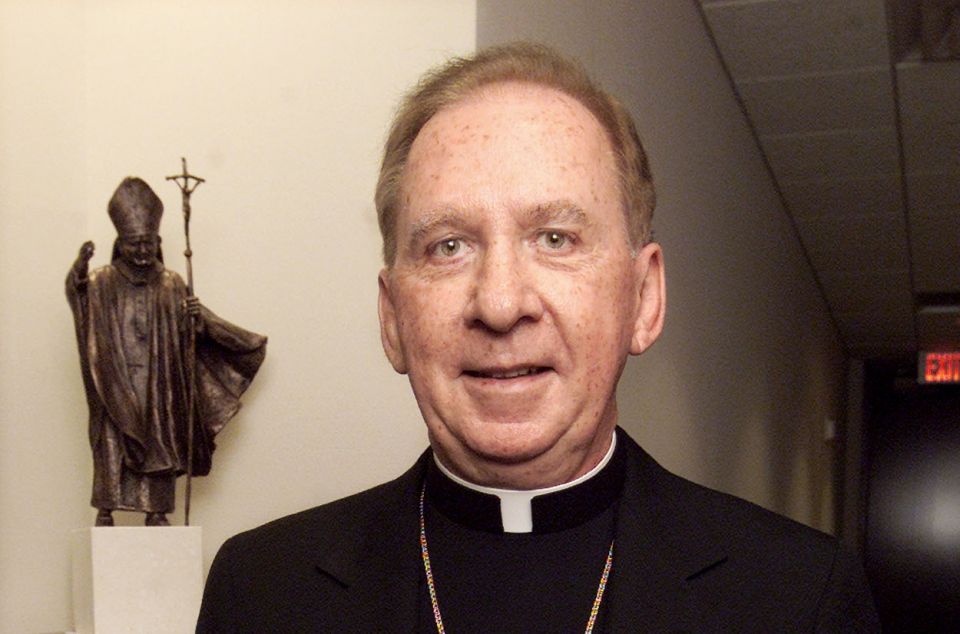 Retired Bishop Thomas J. O'Brien of Phoenix died Aug. 26 at age 82. He served as the third bishop of the diocese from 1982 until his retirement in 2003. He is pictured in a 2003 photo. (CNS/Reuters/Jeff Topping)

Phoenix — Retired Bishop Thomas O'Brien of Phoenix died Aug. 26. He was 82 and had been feeling the growing effects of Parkinson's disease in recent months.

O'Brien ran the diocese for 21 years, which included over that time visits by Pope St. John II and St. Teresa of Kolkata.

He resigned as bishop of Phoenix in 2003, three days after hitting a man with a car. In February 2004, he was found guilty of leaving the scene of a fatal accident. The man O'Brien hit was crossing during a dark night in the middle of the block. The following month, O'Brien was sentenced to four years of supervised probation and 1,000 hours of community service. It was believed to be the first time a U.S. Catholic bishop had been convicted of a felony.

A month before the hit-and-run -- O'Brien had told police he had no recollection of hitting anyone -- he reached an agreement with Maricopa County Attorney Rick Romley on the disposition of clergy sexual assault cases following a yearlong investigation of the diocese. A 14-point plan for the diocese to follow was completed in September 2004, 16 months later. It gained national attention because the agreement, enforceable by civil authorities, mandated changes in diocesan life, such as requiring the bishop to give up some of his duties -- including responsibility for revising and enforcing diocesan sexual abuse policies -- to a moderator of the curia.

Other points included the appointment of a youth protection advocate, revision of the diocesan sexual misconduct policy, setting aside $300,000 over two years to provide counseling for sexual abuse victims, and another $300,000 to the Maricopa County Attorney's victim compensation fund; and the creation of a safe-environment training program required for all church personnel and volunteers. The agreement kept him from being indicted for protecting priests who had abused children.

"Bishop O'Brien understood the vibrant culture of the Southwest and cherished his opportunities to proclaim the Gospel throughout the community," said a joint statement by his successor, Bishop Thomas Olmsted, and Auxiliary Bishop Eduardo Nevares.

"As the population in Arizona continued to increase throughout the 1980s and 1990s, Bishop O'Brien helped welcome many thousands of Catholics to the Diocese of Phoenix. We will always be grateful for his work in establishing 15 new parishes and six new Catholic schools.

Born Nov. 29, 1935, in Indianapolis, O'Brien was ordained a priest in 1961 for the then-statewide Diocese of Tucson, 1961. Following his ordination, he was assigned to Immaculate Conception Parish in Douglas, Arizona, as parochial vicar.

During his tenure in Phoenix, he visited each of the 80 parishes in the diocese -- a process that took five years -- and immediately set about for a second visit for a growing number of parishes. He hosted St. John Paul during his 1987 pastoral visit to the United States, and in 1989, St. Teresa of Kolkata came to Phoenix at his invitation and opened a convent for her Missionaries of Charity in the city.

In September 2016, a civil lawsuit was filed against the Diocese of Phoenix, several parishes and O'Brien. The lawsuit alleges that an unnamed plaintiff was sexually abused by O'Brien while in grade school in the late 1970s and early 1980s. O'Brien categorically denied the allegations and adamantly expressed his desire to clear his name, according to the Phoenix Diocese.

O'Brien is survived by one sister, Jeanne Dearing of Scottsdale, Arizona, as well as four nephews and one niece all living in the metropolitan Phoenix area. He led the U.S. bishops' Committee on Marriage and Family in 1997, when he issued a statement asking parents not to disown their gay and lesbian children but to instead guide them back to the church's religious values.

He often spoke publicly about workers' rights, border issues, abortion and the death penalty. He frequently advocated for Hispanics and other immigrants and he expressed his views to the state legislature, lobbying for the death penalty to be abolished, for the poor to receive competent legal representation and for abortion to be eliminated or restricted. He also asked employers to support family life by not forcing employees to work on Christmas.