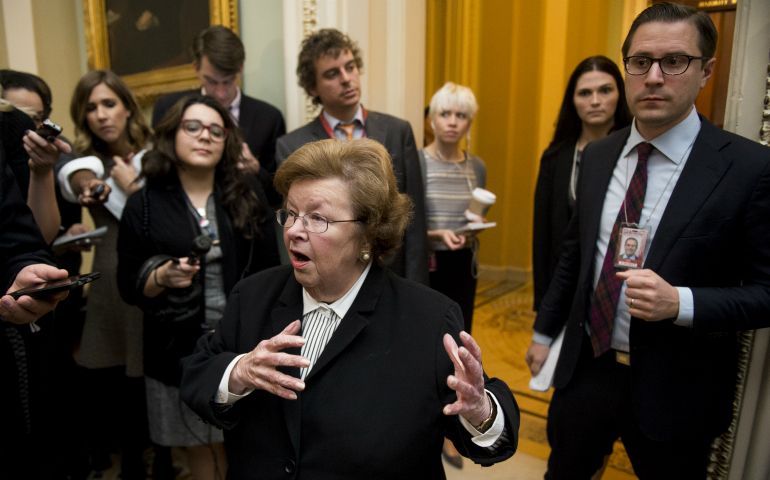 I look up to many politicians, but there's only one I look down on: Sen. Barbara Mikulski. She is 4 feet 11 inches tall, and I'm 6 feet 2 inches. However height-challenged she might be, the nationally known Democrat from Maryland is best not to be trifled with. "I may be short, but I won't be overlooked," she'll tell you — or tell you where to get off if you still don't get it.

After 30 years in the Senate, and before that, 10 years in the House of Representatives, Barbara Mikulski is retiring. It's hard to imagine Washington without her. At 80, she still has all the feistiness and heart that marked her as singular progressive who became the longest serving woman in Congress. One of her political sisters, Sen. Barbara Boxer, said lightly that Mikulski was the one who made it okay for women to wear pants in the Senate.

I suspect she's not retiring. She's rewiring. It's unlikely she'll turn off the inner motor that propelled her election to the House in 1976 and to the Senate in 1986 where she served five terms.

Six years before arriving in Washington, Barbara Mikulski took a jackhammer to drill deep into the bunker of her party's machine bosses and won a seat to the Baltimore City Council. She was the granddaughter of Polish immigrants who settled in the ethnic Fells Point neighborhood. They opened a bakery where old-country chrusciki angel wings were the favored delicacies.

On the council, she was a street-based Saul Alinsky-style social worker. She ably dealt with the usual headaches of local politics, from sewage breakdowns to eminent domain demands.

It wasn't especially hard to stand out as an honest politician in the Maryland of the 1970s. A former governor, Spiro Agnew, pled no contest to tax-evasion charges related to taking bribes and resigned as Richard Nixon's vice-president in 1973, while his successor, Marvin Mandel, served 19 months in prison on mail fraud and racketeering convictions. Only Illinois rivals Maryland for smarmy governors brought low by corruption.

I came to know Barbara Mikulski in the spring of 1986 when she was running for the Senate. In her House office, where she nibbled on a light lunch of cottage cheese and a sliced banana, story after story rolled out. Many were on the wry side. Raised Catholic, she remembered her years at Mt. St. Agnes College in Baltimore when she had been thinking about joining the Sisters of Mercy, who ran the school before it merged in 1971 with Loyola College. "The vow of obedience," she said, "did not have great appeal for me. Poverty was one thing, and I could go along with chastity. But it was obedience. I thought, 'My God, all my life there could be someone telling me what to do and where to go!' And inside me beats the heart of a protestor."

The palpitations became strong on Oct. 11, 2002, when Mikulski broke with gutless Senate hawks like Hillary Clinton, John Kerry and Joe Biden to oppose the Bush-Cheney-Rice scheme of invading Iraq. The overall vote was 77-23 in favor of military violence that would lead to a fruitless war that has taken tens of thousands of lives and still engages American soldiers in Iraq. It was a brave vote, what with the nation's largest weapons company, Lockheed Martin, being a Maryland constituent that stood to make billions in war profiteering — which it did, the Mikulski vote aside.

As a peacemaker, much of her 40 years in Congress saw her opposing another war, the domestic one on women. Without the clench of her political fists, it's doubtful that the Violence Against Women Act would ever have passed in 1994. Marking the 21st anniversary of the vote last year, Mikulski said: "I have zero tolerance for domestic violence. No woman in this nation should live in fear for her safety or the safety of her children. These victims need to have access to resources that can provide them with help. That's why I was proud to cosponsor this legislation when it was first enacted in 1994, and I am proud to have fought for every single one of its reauthorizations since."

When announcing her departure from Congress, Mikulski offered this thought: "Though I'm turning a new page, make no mistake — we're not writing the last chapter."

Which bring us back to rewiring: shouldn't we soon expect a Mikulski memoir with chapter after chapter about her stirring and selfless life?

Donald Trump may be held to account for his actions

Is Trump's firing of James Comey a turning point in the Russia investigation?