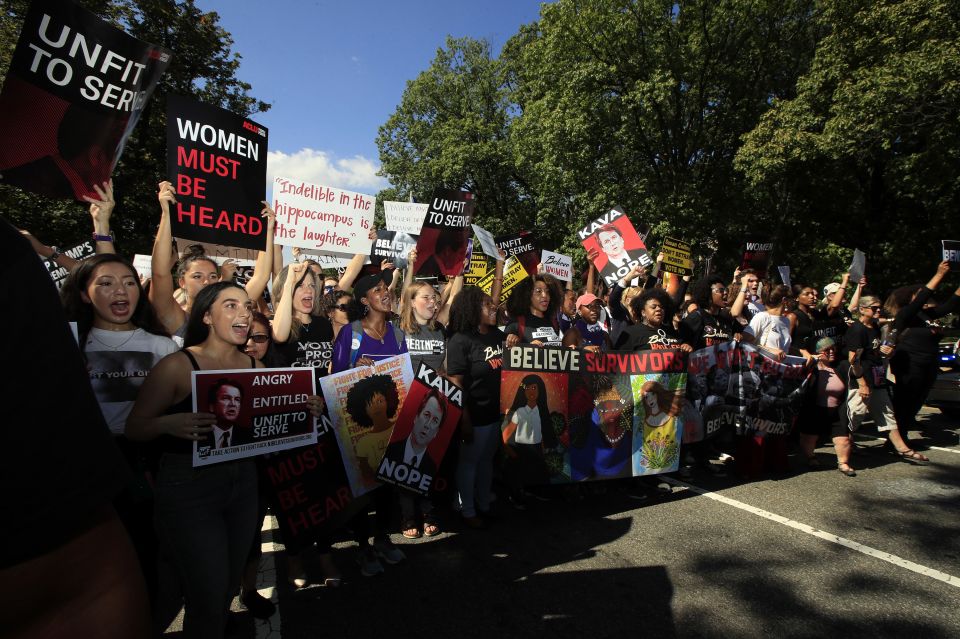 Washington — As senators remain embroiled in a contentious battle over Brett Kavanaugh's potential elevation to the U.S. Supreme Court, faith groups are increasingly voicing both passionate opposition to and support for the nominee.

On Oct. 3, the National Council of Churches — which boasts 38 member denominations with 40 million members — unveiled a sternly worded statement demanding Kavanaugh withdraw from consideration. The group argued the federal judge "exhibited extreme partisan bias and disrespect towards certain members" of the Senate Judiciary Committee during his testimony last week. As a result, the NCC said, Kavanaugh "demonstrated that he possesses neither the temperament nor the character essential for a member of the highest court in our nation."

The statement also claimed Kavanaugh made "several misstatements and some outright falsehoods" during his remarks. An NCC representative later told Religion News Service that the group is concerned about the allegations against Kavanaugh: "We are deeply disturbed by the multiple allegations of sexual assault and call for a full and unhindered investigation of these accusations."

The NCC letter sparked a surge of traffic that crashed the organization's website and was quickly followed by news of another letter opposing Kavanaugh, this time from a group of Catholic nuns — the Benedictine Sisters of Baltimore.

"We urge you, plead with you to vote NO on the confirmation of Judge Brett Kavanaugh," the letter read. Authors railed against the additional FBI investigation into Kavanaugh's background this week, which has been criticized as too short and too narrowly focused by the White House: "The doubts are too many, and the FBI search is being too narrowed to resolve any of this. Let our young women know how valuable they are to the future of this country."

On Thursday, Interfaith Alliance — which claims members from 75 religious traditions — also broke its precedent of not opposing or endorsing Supreme Court nominees and called on Kavanaugh to withdraw.

"As a matter of principle, Interfaith Alliance does not endorse or oppose nominees for government positions," the statement read, explaining that the alliance had only raised questions about his political beliefs when he was first nominated. The statement went on to express concerns about Kavanaugh's "belligerent testimony before the Judiciary Committee" in response to questions regarding sexual assault allegations and his past alcohol consumption, saying he "crossed a line into a political rant" and raised questions about impartiality.

"We cannot support the confirmation of a Supreme Court Justice who has demonstrated a pattern of playing fast and loose with the truth for his own benefit," it read.

Other faith groups, however, have maintained stalwart support for Kavanaugh, who has been called a "warrior" for religious liberty by some conservatives.

Conservative Christian groups such as the American Family Association have pushed for a swift confirmation.

"AFA is relieved that Judge Kavanaugh has been voted favorably out of committee, but the fight is not over," AFA President Tim Wildmon said in a statement. "It is time for the full Senate to confirm Judge Kavanaugh immediately. … Issues important to the American Family Association, such as sanctity of life and religious freedom, are taking on an even greater importance in our culture, and how the Supreme Court rules in these matters will affect every American."

Jerry A. Johnson, president and CEO of National Religious Broadcasters, described criticism of Kavanaugh as "the Left's disgraceful character assassination in service of raw power politics," adding that he "eagerly anticipate(s) Judge Kavanaugh being sworn-in as the next associate justice of the Supreme Court."

The conservative Center for Security Policy also called on supporters to make Thursday a day of prayer for Kavanaugh, and President Trump's evangelical advisers have continued to offer their enthusiastic support.

Texas pastor and Trump advisor Robert Jeffress told Fox News that the battle over Kavanaugh isn't between Republicans and Democrats, but "between good and evil."

"Make no mistake about it: The reason the left hates Kavanaugh is not because of his judicial philosophy, it's not because of what he may or may not have done to Dr. Ford — the Democrats don't care one thing about Dr. Ford," Jeffress said in reference to Christine Blasey Ford, one of Kavanaugh's accusers. "They are afraid that if he is confirmed as a Supreme Court justice, he may chip away at Roe v. Wade and diminish the number of babies being murdered every year in the womb. … Conservative Christians see this."

Last week, the editors of America Magazine, a Catholic Jesuit magazine, rescinded its endorsement of Kavanaugh after his Sept. 27 Senate hearing. Organizations of religious women — such as Mormon Women for Ethical Government and then 320 Episcopal clergywomen — had also called for further investigations into allegations of sexual assault by Kavanaugh. Some faith-based protesters demonstratedin Washington, D.C., last week against and for his potential confirmation.

Merrick Garland is Jewish. Does it matter?

After Senate clash, Kavanaugh nomination an occasion for prayer