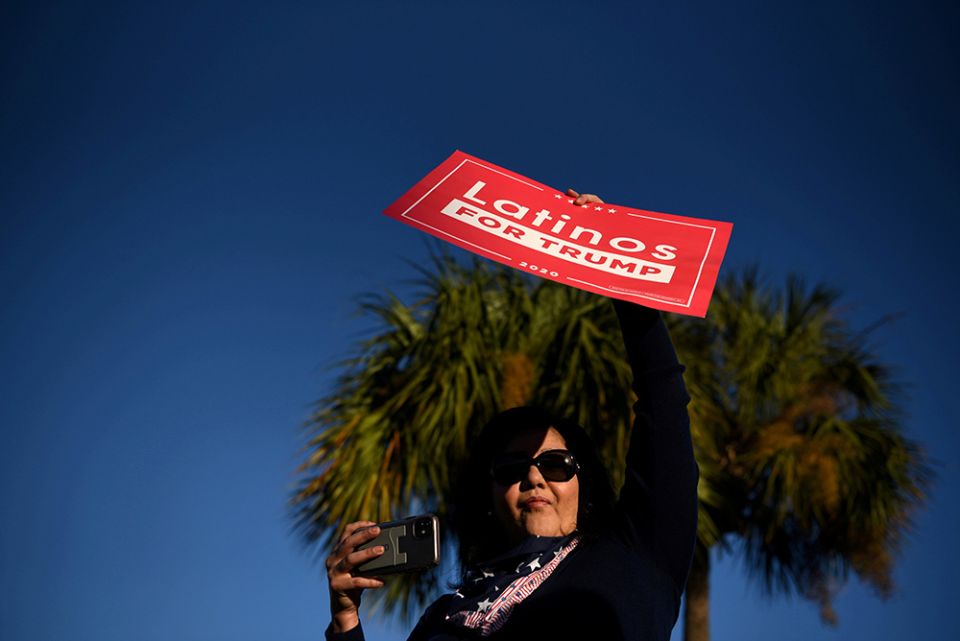 A Latina voter holds up a sign in support of President Donald Trump as voters line up at a polling station on Election Day in Houston Nov. 3. (CNS/Reuters/Callaghan O'Hare)

Neither immigration nor abortion were the top political priority in 2020 for most Latinos in Texas, anthropologist and writer Cecilia Ballí said in an Instagram Live talk hosted by The Texas Tribune Dec. 3.

In a nonpartisan study she helped conduct for the Texas Organizing Project, a progressive grassroots campaign to mobilize Black and Latino Texans, Ballí said she found that issues such as the economy, jobs, education and health care were more important to many Latinos in the state.

"At a national level, we imagine Latinos as purely immigrants or children of immigrants — basically one-dimensional voters that have one interest: immigration," Ballí said. "That's the only time Latino voters get engaged — a party needs the Latino vote and they put out an immigration policy proposal."

But overall, the role of religion in shaping Texas Latinos' political decisions has declined over the years, Ballí said. 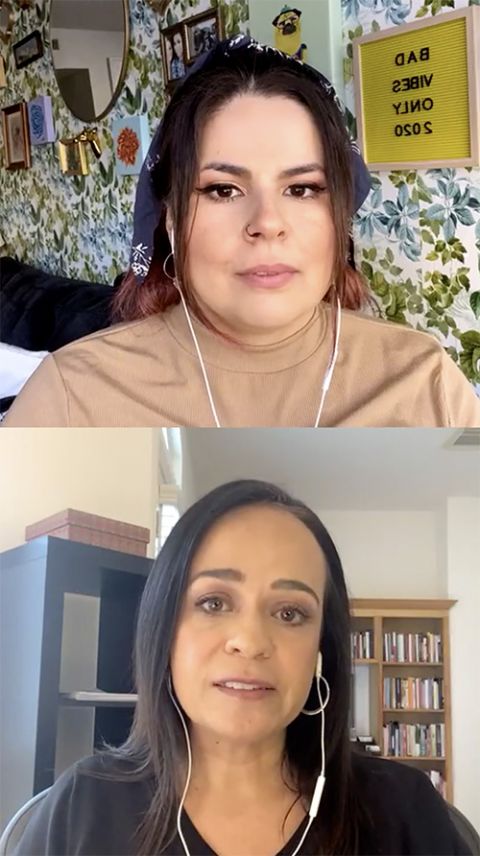 Texas Latinos, particularly in the Rio Grande Valley, swung toward President Donald Trump during the 2020 election in greater numbers than in the previous election cycle, Ballí said.

This came as a surprise to many pundits and party operatives who tend to assume that all Latino communities are Democratic strongholds, she said.

Ballí found that Latinos in the state often have complex relationships to party establishments and don't always feel that their needs are being met by either Democrats or Republicans.

"I do think that the state Democratic Party has taken the [Rio Grande] Valley for granted, just like the national party, because it's been so consistently blue, and [they think] that's an area you don't have to pay attention to," Ballí said.

During the course of the study, Ballí and two colleagues conducted in-depth interviews with 100 Latino Texans in five major regions of the state — the Rio Grande Valley, Dallas, San Antonio, Houston and El Paso — during the year prior to the election. Ballí said that to her, the study's "most interesting" finding was how politically flexible many respondents were.

"There are a lot of people who don't affiliate with a party, or ... [if they did have a party] they would tell us, 'I would be open to another perspective,' or 'I don't want to be too closed off,'" Ballí said.

For party organizers and commentators who have mistakenly viewed Latinos as a monolith, this diversity can come as a surprise, Ballí said. While it's true that Latinos nationally tend to vote in about a two-to-one ratio for Democrats during presidential elections, many Texas Latinos believe that the Democratic Party has taken their votes for granted or that they're expected to vote a certain way, Ballí said.

Some Latinos in Texas, especially in the Rio Grande Valley, saw Trump as being outside the political establishment and viewed voting for him as an "uprising" against the expectations that they would be loyal to Democrats, she said.

"They said, 'We're the silent majority … we're finally going to be heard, we've never been able to come out as Republicans in the Valley, we've always been told how to vote by our families,'" Ballí said.

Ballí and her colleagues didn't just focus on voters — they also interviewed nonvoters, hoping to better understand why Latino voter turnout tends to be lower than that of other racial and ethnic groups in the U.S. In 2016, 48% of eligible Latinos voted, compared with 60% of eligible Black people and 65% of eligible white people, according to the Pew Research Center.

Although voter turnout overall reached a 120-year high in November's presidential election, Ballí said Latino voter turnout didn't increase as much as many organizers had hoped.

Ballí said the rhetoric that Latinos are a "sleeping giant" in the electorate that needs to be woken up by the right candidate, policy or strategy is "honestly racist," playing on a stereotype of "sleeping Mexicans." It suggests that Latinos who don't vote are uninformed and apathetic about politics, Ballí said.

On the contrary, Ballí said she and her colleagues found Latinos who didn't vote often followed political news and understood the issues. Rather than being apathetic about politics, those who didn't vote tended to believe that their individual votes wouldn't count and that their voices weren't the ones that mattered in U.S. politics — that "power resides somewhere else."

Many nonvoters also didn't have a lot of family or community members who voted. Voting is a social habit, Ballí said, which means that if you're surrounded by people who can't or don't vote, you're unlikely to do it yourself. On the other hand, if everyone around you votes, you might feel empowered (or obligated) to do the same, she said.

Another reason some Latinos don't vote is what Ballí called "generational disempowerment." Many nonvoters she and her colleagues interviewed in San Antonio, for instance, were living with the long-term effects of racial and economic segregation. They often sensed that their neighborhoods weren't getting the kinds of resources that wealthier and whiter areas of the city were receiving.

"There's a sense that things aren't changing, there's low economic mobility — and that bleeds over into attitudes towards voting," Ballí said. "You don't feel that your vote is necessarily going to change your reality."

In the Rio Grande Valley, nonvoters often described being disheartened by high levels of corruption and nepotism in local politics, with candidates running on reputation and name recognition more than on substantive policies, Ballí said. They said the same few people seemed to hold all the power locally.

"You have some people that focus on what they can control, which is their own family's economic survival," Ballí said. "And they feel that politics is not where they're going to make a difference."

Family members, she said, can influence one another to vote by talking about voting, providing information on how to vote and helping one another get to the polls. Churches and other organizations that encourage voting can also help create a social habit of voting in a community.

Ballí said in order to reach Latinos in Texas, parties need to start seeing them as the politically and culturally diverse group they really are.

U.S. Latinos' relationship to race and ethnicity is complicated — many don't primarily identify themselves as "Latino," but rather in terms of their national or cultural background — for instance, as Mexican, Guatemalan or Chicano, she said. Their political views are similarly disparate and not always perfectly aligned with either major party.

If they hope to mobilize Latinos to vote for them, Ballí said, parties need to start working for Latino votes — even doing door-to-door outreach — rather than taking their loyalty for granted.

"Campaigns ... have to genuinely listen to Latinos and understand their views," Ballí said, "and then have something to offer — something of value in their platform that's going to compel those voters."

A version of this story appeared in the Dec 25, 2020-Jan 7, 2021 print issue under the headline: Study highlights Texas Latinos' political diversity, agency, independence .