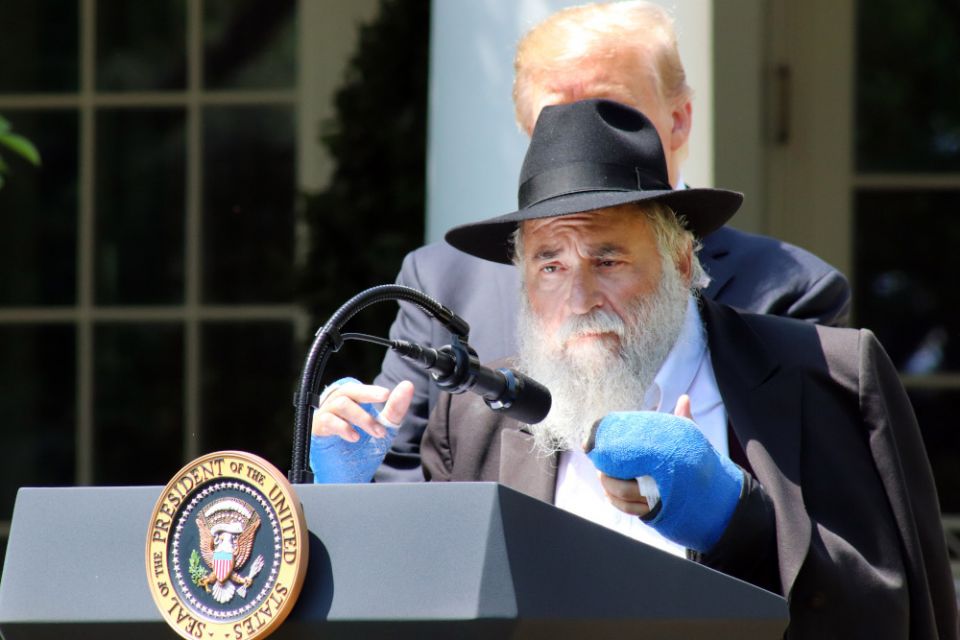 Rabbi Yisroel Goldstein speaks in front of President Trump during a National Day of Prayer event in the White House Rose Garden on May 2, 2019, in Washington. Goldstein, who leads the Chabad of Poway in San Diego, was injured when the synagogue was attacked by a gunman on April 27, 2019. (RNS/ Adelle M. Banks)

Washington — Among the guests at a White House ceremony marking the National Day of Prayer was Rabbi Yisroel Goldstein, leader of the California synagogue recently attacked by a gunman.

Goldstein marveled that he survived the attack.

"We cannot control what others do but we can control how we react," said Goldstein, who sought to protect his congregation instead of running. "I should have been dead by now, based on the rule of statistics."

Goldstein, standing with his hands wrapped in blue bandages after a finger was blown off in the attack, tried to pivot beyond the tragedy to next steps. Some applauded as he suggested bringing a time of reverence to schoolchildren so they will know "every human being is created in God’s image" and they are valued.

"Many have asked me, 'Rabbi, where do we go from here?'" he said. "If something good can come out of this terrible, terrible horrific event, let us bring back a moment of silence to our public school system."

The rabbi was among a group of leaders from different faiths who joined President Trump at the event.

"As we unite on this day of prayer, we renew our resolve to protect communities of faith and to ensure that all people and all of our people can live and pray and worship in peace," said Trump, drawing applause from Christians, Jews, Muslims and others at the midday interfaith gathering on Thursday (May 2).

"In recent months, it’s been pretty tough. We’ve seen evil and hate-filled attacks on religious communities in the United States and all around the world."

Using a Yiddish term, Goldstein said he considered Trump "a mensch par excellence," drawing applause for describing the chief executive as a person of honor.

"Mr. President, when you called me, I was at home weeping," the Orthodox rabbi in a big black hat told Trump. "You were the first person to begin my healing."

"Oh, wow," said a man from the rows of chairs set up in the garden.

The ceremony, marking the national observance created by Congress in 1952, lasted more than an hour. It featured remarks by Vice President Mike Pence as well as a former heroin addict who relied on prayer and religious leaders representing Catholic, Protestant, Jewish, Mormon, Muslim and Hindu beliefs.

Pence, like Trump, cited the recent attacks on houses of worship across the globe and in the United States and said he would be visiting Louisiana on Friday after three historically black churches were burned there in recent months.

The vice president, who opened the ceremony before the arrival of the president and first lady, described the White House as a place of prayer, with Trump having "a practice of opening every Cabinet meeting in prayer."

"I can assure you at a time when religious belief is often marginalized and even ridiculed, in this White House under this president we believe in prayer," said Pence, drawing applause.

Trump used the occasion to highlight new and old efforts he said he has pursued to enhance religious liberty for Americans.

"Earlier this week, I took action to ensure that federal employees can take paid time off to observe religious holy days," he said. "And just today we finalized new protections for conscience rights for physicians, pharmacists, nurses, teachers, students and faith-based charities." 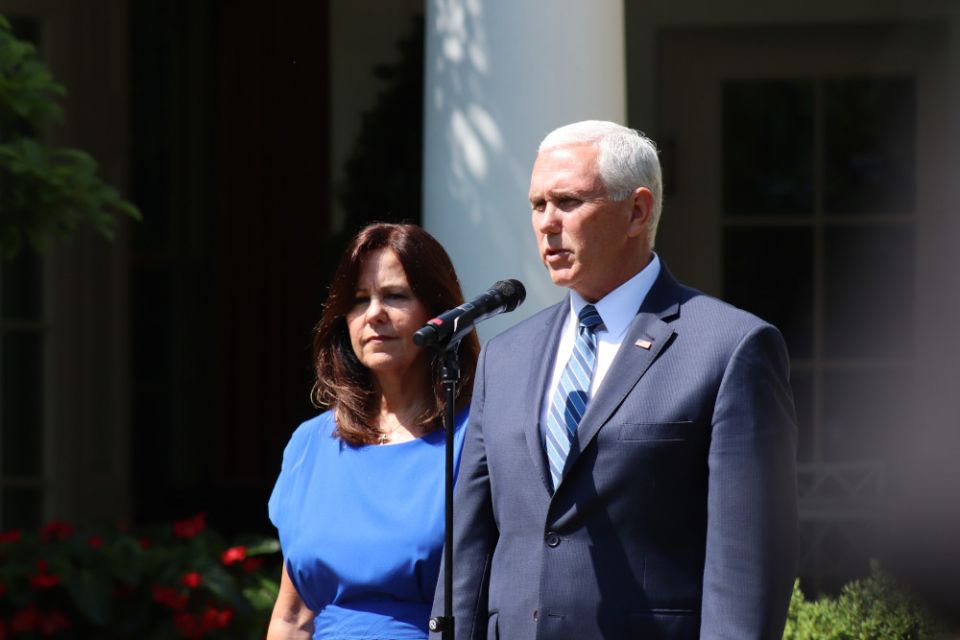 Vice President Pence, with wife Karen, addresses a National Day of Prayer event in the White House Rose Garden on May 2, 2019, in Washington. (RNS/Adelle M. Banks)

The announcement drew applause from the crowd but was criticized by others, including the Leadership Conference on Civil and Human Rights, which said the new rule from the Department of Health and Human Services will adversely affect patients who are denied care by health care workers citing moral or religious objections.

"HHS’s final denial of care rule will substantially harm the health and well-being of many — in particular women and transgender patients," said Vanita Gupta, president and CEO of the Leadership Conference, in a statement. "The government should protect all patients from discrimination, not make it easier for those in the health care system to discriminate."

Trump also pledged that his administration "will preserve the central role of faith-based adoption and foster care agencies to care for vulnerable children while following their deeply held beliefs."

He touched on other hot-button topics, declaring to cheers that "every child, born and unborn, is a sacred gift from God" and describing what he sees as an increased use of the greeting "Merry Christmas" in stores.

Between citing his administration’s recent efforts to address criminal justice reform and expressing his regard for the country, Trump said "we think about God” in the midst of “witch hunts."

Despite the interfaith nature of the event, evangelical Christians seemed dominant among the speakers. A number of audience members sometimes raised their hands in the air in response to the prayers and music of the service.

Faith & Freedom Coalition founder Ralph Reed prayed that Trump and his advisers would have "supernatural wisdom" and "a spirit of boldness and moral courage to do the right thing even in the presence of criticism and attacks." 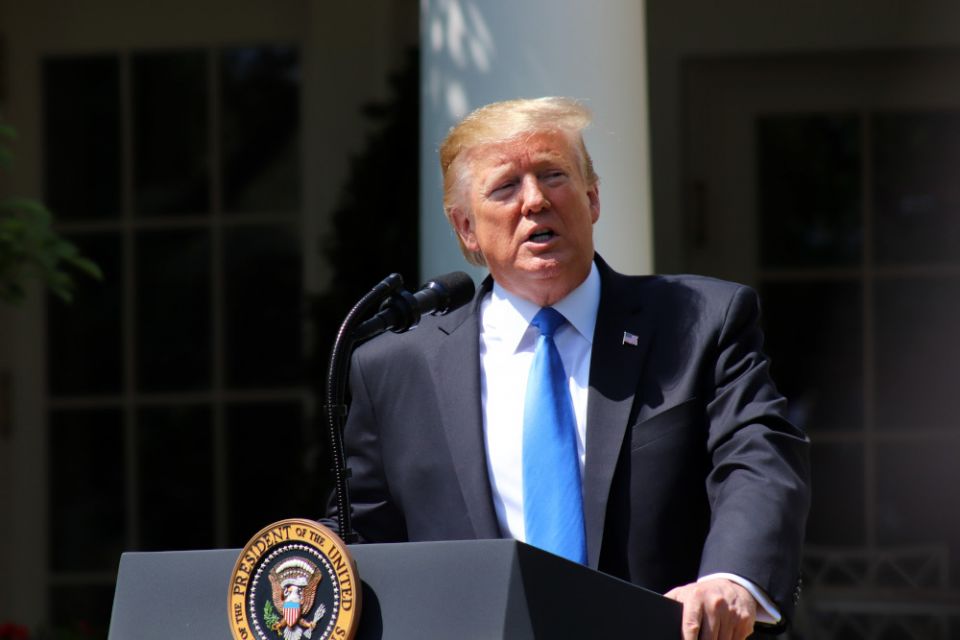 President Trump speaks a National Day of Prayer event in the White House Rose Garden on May 2, 2019, in Washington. (RNS/Adelle M. Banks)

Florida megachurch pastor Paula White — whose husband, Jonathan Cain, sang during the service backed by a Southern Baptist worship group — closed out the prayer section of the ceremony, asking the audience members to join hands despite their probably being “a little bit sweaty” on the hot, sunny day.

"We declare every demonic network to be scattered right now,” she prayed. “We declare right now that there is a hedge of protection over our president, first lady, every assignment, the purpose they carry."

On the eve of the prayer day, Trump declared prayer to be “the most powerful thing there is” as he and first lady Melania Trump welcomed more than 100 faith leaders to dinner in the State Dining Room. Pence was a speaker at Washington’s Museum of the Bible that night at a National Day of Prayer Task Force dinner.

In the annual White House statement on the National Day of Prayer, the president also highlighted the need to protect houses of worship from attacks.

"The United States’ steadfast commitment to upholding religious freedom has ensured that people of different faiths can pray together and live in peace as fellow American citizens," Trump said in the proclamation. "We have no tolerance for those who disrupt this peace, and we condemn all hate and violence, particularly in our places of worship."