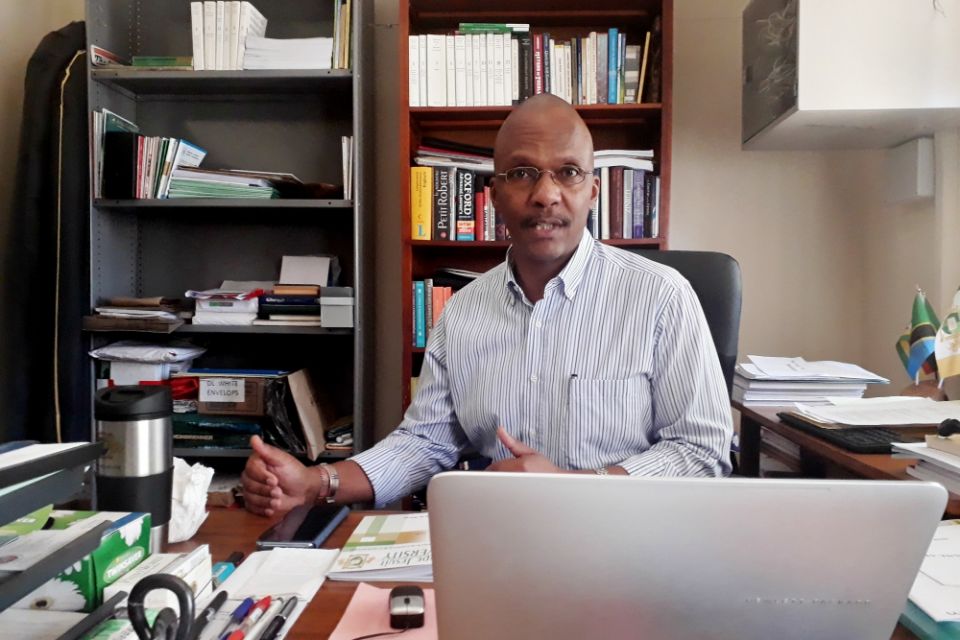 Harare, Zimbabwe — Arrupe Jesuit University and the Catholic University of Zimbabwe in Harare have been registered with the Zimbabwe Council for Higher Education (ZIMCHE) as full-fledged universities and are now geared to expand their degree offerings as well as open new campuses across the country.

Jesuit Fr. Gilbert Mardai, pro vice chancellor for administration at Arrupe Jesuit University — located less than 1 kilometer from the Mount Pleasant campus of the Catholic University of Zimbabwe in Harare — told NCR that the institution was motivated to register as a full-fledged university to meet the needs of young people who are completing secondary and high school education.

Arrupe Jesuit University, founded by the Society of Jesus in 1994, originally only offered philosophy studies until its provisional registration as a full-fledged university in 2017. The university was fully registered in 2018.

"To move into a fully-fledged university, the motivation was basically the needs we saw around us. We considered that Jesuit education is already something that is predominant in Zimbabwe, hence we sought to expand into other fields and we also want to continue growing as a university," Mardai said.

The Catholic University of Zimbabwe was established in 1998, initially offering a bachelor's degree in business management and information technology. The university is currently running a 10-year strategic plan into 2022, according to Mabel Nyamurowa, the assistant registrar responsible for marketing. 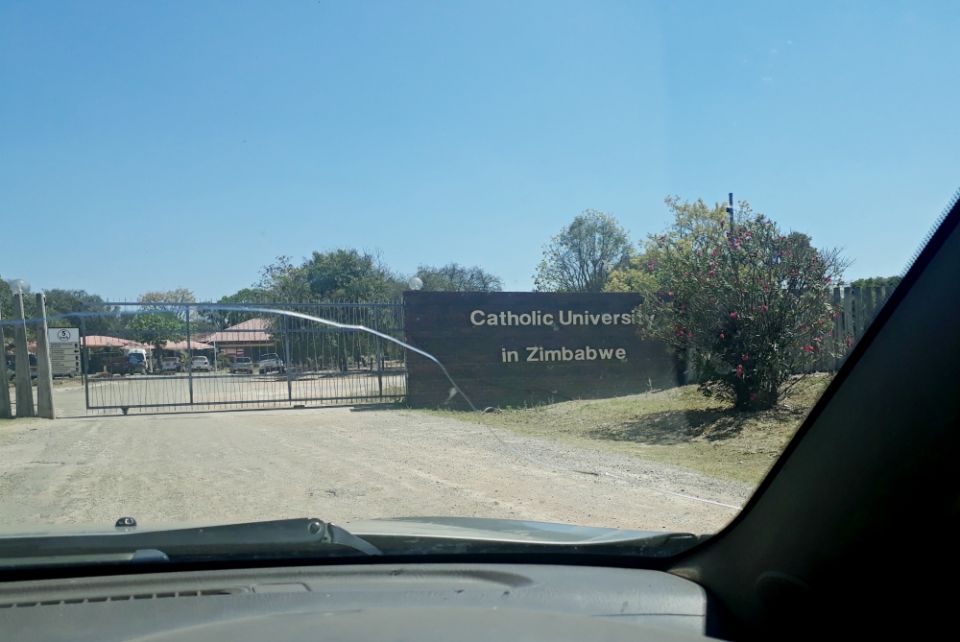 A car arrives at the Catholic University of Zimbabwe in Harare. (Tawanda Karombo)

Nyamurowa told NCR that the strategic plan aims to grow the university with the "establishment of campuses in the eight dioceses of the Catholic church in Zimbabwe, the launch of new study programs [and] offering of diverse study modes" in response to suggestions from students and other stakeholders, such as employers and educationists.

The Catholic University of Zimbabwe has so far opened six out of the eight planned campuses across the country. It currently has three faculties: commerce, theology and humanities, and social sciences. The university will also soon offer degrees in education.

Nyamurowa added that the university is having an impact with Catholic and Christian students. The university conducted a recent internal survey confirming that 98.7% of students are Christian, and 28% are Roman Catholic, although the university "thrives on diversity" and also operates on nondiscrimination principles.

The university has a current enrollment of 3,800 students and recently celebrated the graduation of 503 graduates in May.

Delroy Takavarasha, who is studying for a certificate in nongovernmental organization management at the Catholic University of Zimbabwe, told NCR that the environment at the university is conducive for serious learning.

"It's a peaceful and Christian environment which is also quiet and conducive for effective learning. It is also very close to town which helps a lot with logistics," said Takavarasha.

"My experience at CUZ was good although the journey was very long," said Chaita, who graduated in May and is a finance and administration manager at a medical equipment company. "The IT courses are very challenging but it is a good course."

Arrupe Jesuit University celebrated its first graduation ceremony as a full-fledged university in May and currently has a total enrollment of 120 students.

Jesuit Fr. Agbonkhianmeghe Orobator, chancellor at Arrupe Jesuit University and president of the Conference of Jesuit Major Superiors of Africa and Madagascar, said at the official opening of the university in 2018 that the institution is geared to be innovative in educating society and inculcating just values.

"AJU will devise creative and innovative ways to [approach] this challenge, including the education of a society that values fairness, equity and justice and undertake to create just and equitable socioeconomic and political conditions for the marginalized and underprivileged to flourish in freedom and dignity," Orobator said.

At Arrupe Jesuit University, there is also an emphasis on community service. Students "also have to put in some hours to do something in the community in the form of teaching in poor schools and working in poor" communities, according to Mardai. The Catholic University of Zimbabwe also "promotes social teaching and is not blind to social issues in Zimbabwe."

"We have a brilliant future as a private university which does not run on subsidies from anybody amidst all these challenges. We are trying to make ends meet in a very difficult economy but we seem to be moving ahead," he said. 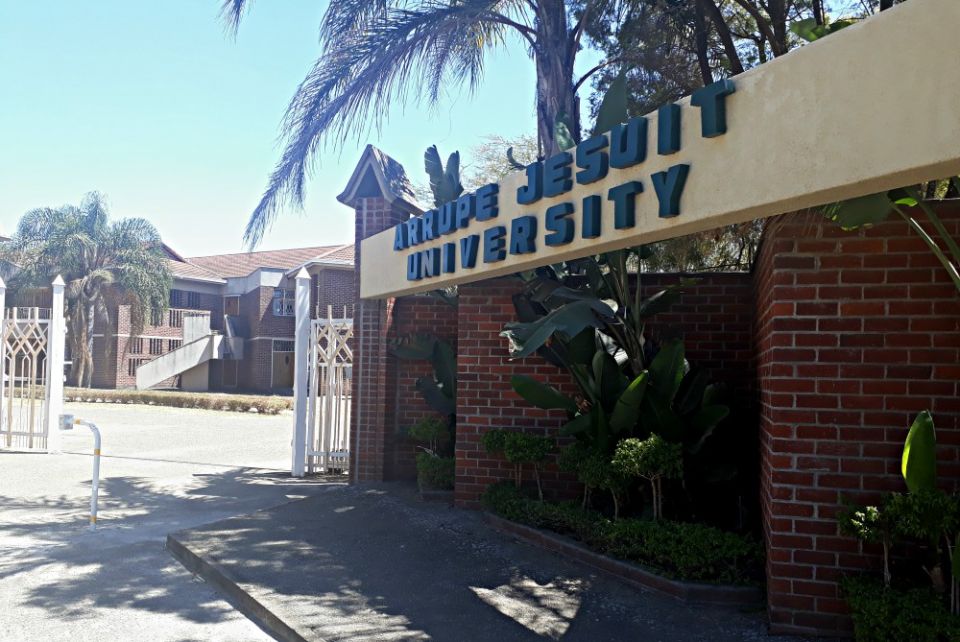 Both universities also hope to be a place of dialogue and healing. Arrupe hosted a conference on human trafficking in Harare this year and also organized public lectures on topics such as South Africa's apartheid and the Rwandan genocide. The Catholic University of Zimbabwe organized an international conference on migration in 2018.

As Zimbabwe's political and economic crisis unfolds, Arrupe Jesuit University wants to play a key role under which leaders of political parties can dialogue objectively. Zimbabwean church leaders, including the Zimbabwe Catholic Bishops' Conference, recently called for a seven-year political sabbath under which there will be no political contestation, arguing that politics is distorting efforts to solve the crisis.

"What we are going to do is to create an atmosphere that is nonpartisan so that it allows for critical reflection" on societal issues, Mardai said. "It would mean that Arrupe Jesuit University can be a place where dialogue will not be the kind that follows the whims of certain individuals but looks at the objective way forward."