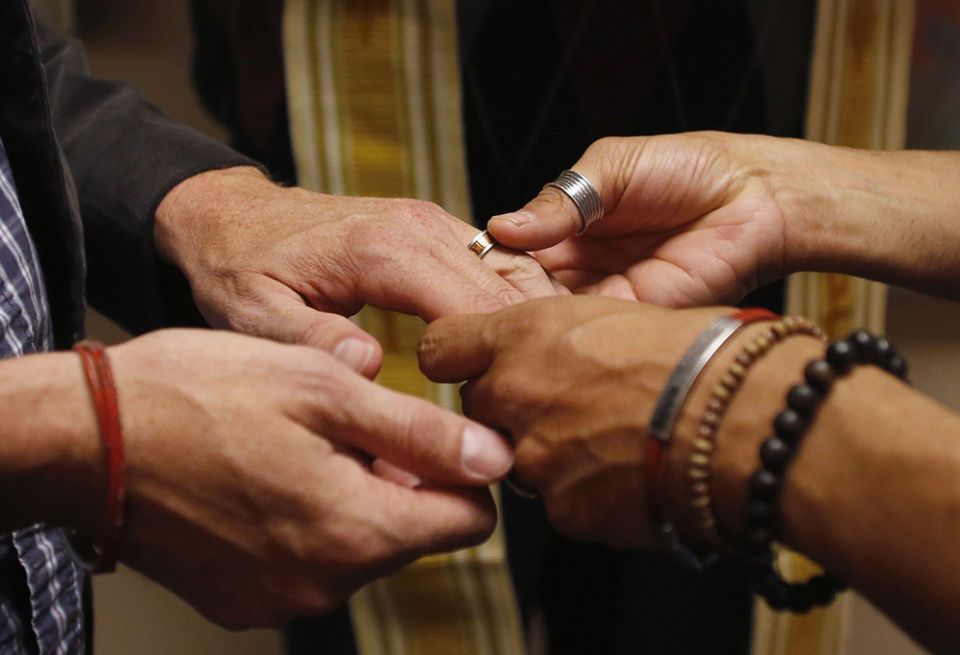 Pope Francis, who made headlines in the first months of his papacy by responding, "Who am I to judge?" when asked about gay priests, has now signed off on a Vatican decree that priests cannot bless same-sex unions since God "cannot bless sin."

The decree, issued by the Vatican's Congregation for the Doctrine of the Faith on March 15, states, "It is not licit to impart a blessing on relationships, or partnerships, even stable, that involve sexual activity outside of marriage."

For some, the new decree may result in whiplash, coming less than five months after the pope made headlines in a documentary film for once more affirming his support of civil union laws for same-sex couples. For others, it's further affirmation of the church's teaching that "homosexual acts are intrinsically disordered." But for all, it's another tricky move in Francis' tightrope walk of upholding church teaching, while also trying to extend a warmer welcome to LGBTQ persons.

What and whom may a priest bless and why?

A priest can bless a house, an automobile and a pet; the 400-page Book of Blessings, which is both approved by the Vatican and local bishops' conferences, even includes prayers for fishing gear, boats and athletic fields.

Among the objects and persons that can be blessed by priests are gay individuals — but with a caveat.

According to the new decree, a priest can bless a person who happens to be gay, but they must "manifest the will to live in fidelity to the revealed plans of God as proposed by Church teaching." The same conditions apply to "any union that involves sexual activity outside of marriage."

"This is a version of the old tried-and-true 'love the sinner, but hate the sin' mentality that shows up not only in Roman Catholicism but in other Christian denominations," said Patrick Hornbeck, professor of theology at Fordham University.

"The comparison would be the priest can bless the car, but the priest can't bless the car that he knows is going to be used in a bank robbery," Hornbeck told NCR. "Here, what the Vatican is saying is by the very nature of who LGBTQ people are, their bodies and their selves are such that they cannot be blessed in relationship with one another."

What's behind the timing of this decree?

"It seems to be the Vatican's response to some German bishops who had floated this idea in the lead-up to their country's synod, as a way of reaching out to LGBTQ people," Jesuit Fr. James Martin, a leading advocate for improving the church's ministry toward LGBTQ Catholics, told NCR.

The German Catholic Church's "Synodal Path" is a two-year process aiming to tackle neuralgic church issues, such as women's leadership and the inclusion of LGBTQ persons.

In 2019, Bishop Franz-Josef Bode, deputy chairman of the German Bishops' Conference, said that he is "sure that the category of blessing will play a role" in the synodal process. Bode, who has previously supported an open debate on blessings of same-sex unions, has said, "We must not always treat homosexuality from the point of view of serious sin."

Similarly, German Cardinal Reinhard Marx of Munich and Freising, who serves on Francis' council of cardinal advisers, has said that gay couples can receive a blessing from the church "in the sense of pastoral care," though he sought to distinguish it from the same blessing the church offers to married couples, saying, "The sacrament of marriage is aimed at a faithful relationship between a man and a woman that is open to children."

Does this decree mean Francis is less LGBTQ-friendly than he's often perceived?

On March 13, Francis marked his eighth anniversary in office, and, according to Hornbeck, "in that time he has extended a warmer welcome to LGBTQ folks than any of his predecessors."

Yet Hornbeck, who is gay and married in the Episcopal Church, said that "the one thing he has not done during that period of time is to make any adjustments or really even gesture towards concrete adjustments in the Catholic Church's teachings towards same-sex sexuality or LGBTQ issues when it comes to moral theology."

Similarly, Natalia Imperatori-Lee, a professor of religious studies at Manhattan College who specializes in sexuality and theology, said that Francis "has done a lot to move us away from the 'inherently disordered' language" that Catholic theology has traditionally used to describe homosexual persons. But the new decree equates same-sex marriage with sin, she said.

"That runs counter to the idea that LGBTQ persons are made in the image of God," she told NCR. "So which one is it?"

In a statement, Francis DeBernardo, executive director of New Ways Ministry, described the decree as "impotent" and said "it won't stop the movement to bless such couples, and, in fact, it will actually encourage Catholics in the pews and the many Catholic leaders who are eager for such blessings to happen to work harder in their support — and blessing — of same-sex couples."

The Vatican's decree comes at a time when Catholics in Western Europe and the United States are increasingly accepting of LGBTQ relationships, with 61% of U.S. Catholics approving of gay marriage.

While Francis has continually backed official church teaching on marriage, he has encouraged honest discussions on the need for better pastoral outreach to the LGBTQ community. On a personal level, his outreach to LGBTQ Catholics has been significant. In 2018, he made headlines for telling abuse survivor Juan Carlos Cruz that "it doesn't matter that you are gay. God made you that way and he loves you the way you are, and it doesn't matter to me." Similarly, the pope has personally reached out to a gay married Italian couple encouraging them to raise their children as Catholics.

"Most LGBTQ people don't follow the Vatican that closely," said Hornbeck, noting that "there's a sense that Pope Francis has in fact moved the needle" and that those who just happen to see the headlines may be surprised by this new decree.

Yet there should be no surprise, he said, as Francis has "always stopped short of blessing a union or let alone a marriage."

"It's a reaffirmation of a position that the Catholic Church has held ever since it has written down pronouncements on modern same-sex relationships," said Hornbeck. "But in the context of all of the things that the pope has seemed to do on behalf of and with LGBTQ people, it's hard not to take this as an unnecessary condemnation of relationships that many people find to be profoundly life-giving."