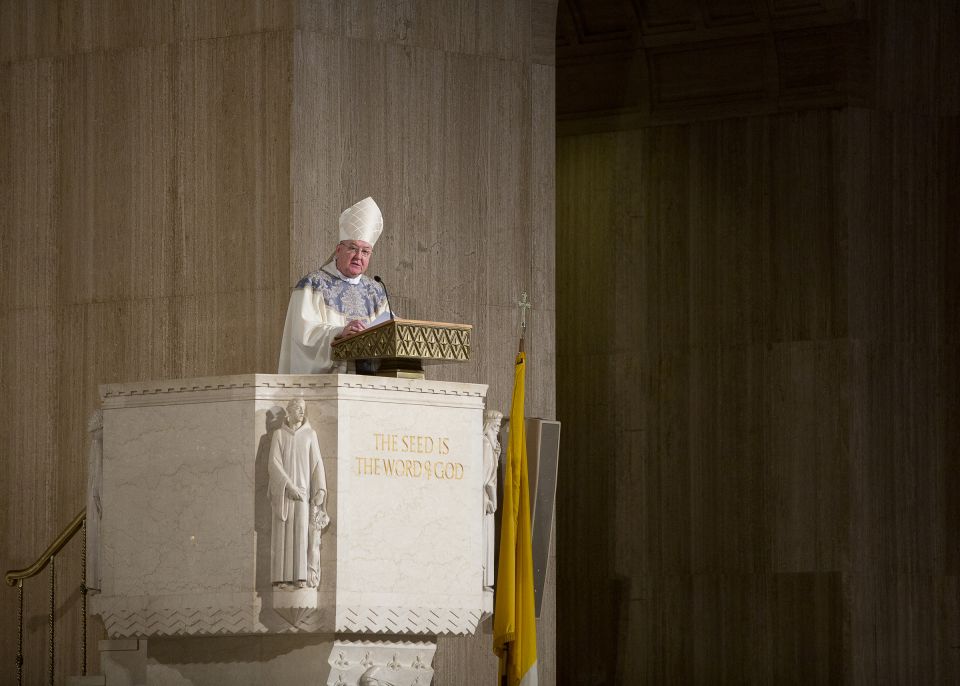 Cardinal Kevin Farrell, head of the Vatican's Dicastery for Laity, Family and Life, reads a letter from Pope Francis during a Mass dedicating the Trinity Dome Mosaic at the Basilica of the National Shrine of the Immaculate Conception in Washington Dec. 8. (CNS/Tyler Orsburn)

The Dicastery for Laity, the Family and Life announced that starting Feb. 2, the feast of the Presentation of the Lord, it would launch a digital series of seven catecheses that include musical interludes starring famed Italian tenor Andrea Bocelli. There would also be monthly video shorts meant for groups and parishes.

All the materials will be available for free on the dicastery's site www.laityfamilylife.va and its YouTube channel, PcFamiglia.

Cardinal Kevin Farrell, prefect of the dicastery, told reporters Jan. 25 that the series was meant to provide simple and inspiring ways to reflect, pray and prepare over the next seven months until the start of the world meeting in Dublin Aug. 21-26. The theme of the gathering is "The Gospel of the Family: Joy for the World."

The five-day meeting, he said, is meant to promote the Catholic Church's teachings about love and family life as well as encourage, guide and help all families and individuals without excluding anyone, in line with the text and spirit of "Amoris Laetitia," Pope Francis' post synodal apostolic exhortation on the family.

Workshops, sessions and seminars will touch on various aspects concerning the family, and Farrell confirmed there would be a seminar, led by Cardinal Sean O'Malley of Boston, dedicated to the protection of minors and vulnerable adults. The Pontifical Gregorian University's Center for Child Protection, based in Rome, also will be involved in the seminar.

While the Vatican had not yet released an official papal schedule, Farrell said the pope has assured him, Irish bishops and key Irish officials that he was planning to attend the event. The cardinal said he was not in a position to know whether the papal trip would include a visit to Northern Ireland.

People | World Meeting of Families catechesis to be available online