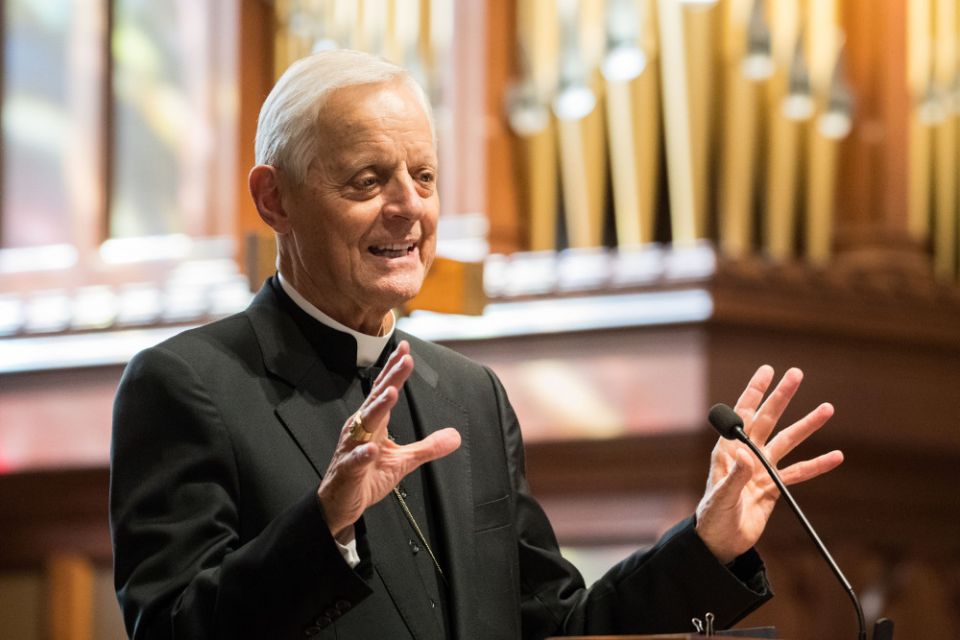 Washington — The process of "journeying together" during the Catholic Church's synods of bishops examining contemporary challenges on marriage and family life offers a map for the church's outreach, Washington Cardinal Donald Wuerl said Sept. 12.

This process reflects not only the pontiff's pastoral approach, but also offers a template for how priests and laypeople can accompany others to help them understand and live the faith, he said.

Wuerl made the remarks at Georgetown University in an address on "Pope Francis: Fresh Perspectives on Synodality" as part of the university's Dahlgren Chapel Sacred Lecture series.

He explained that "synodality" refers to coming together or journeying together, which he said is how those gatherings of the world's bishops tackled issues facing married couples and families.

The cardinal noted that Pope Francis emphasized the importance of dialogue as those discussions unfolded. "We can recall his advices to the bishops ... to speak with openness and clarity, to listen with humility and be open to the Holy Spirit."

Wuerl said that the pope's understanding of synodality, that journeying together, involved not only dialogue with bishops who teach and transmit the faith, but also drew upon insights from married couples and families in dioceses around the world.

The proceedings formed the basis for Pope Francis' 2016 apostolic exhortation "Amoris Laetitia" ("The Joy of Love").

"We have to listen to people living the faith," the cardinal said, who added that journeying together toward the love and truth of Christ then involves all members of the Catholic Church — clergy, religious and laity. The two synods on marriage and family, the cardinal added, were preceded by consultations of local churches throughout the world on the lived situation of families, their challenges and experiences.

That approach, he said, resulted in "Amoris Laetitia" being a "consensus exhortation," with its elements drawn from the bishops' discussion and the worldwide consultation of Catholics receiving approval from a significant majority of the participating bishops.

"I have been present in some capacity for 11 synods and as a bishop member for seven. The last two, the 2014 and 2015 gatherings, were, in my opinion, the most open, engaging and reflective of episcopal collaboration and consultation," Wuerl said.

That same approach, he said, has marked the preparation for the upcoming 2018 Synod on Young People, the Faith and Vocational Discernment.

In the Archdiocese of Washington, a "Share With Francis" initiative preparing for that synod involved gathering feedback from 661 participants in listening sessions at parishes, in young adult groups and on college campuses, and nearly 1,000 online responses from young people.

"Pope Francis understands the process of listening to the faithful and to his brother bishops to be a key part of his own teaching and pastoral ministry," the cardinal said. "It is a part of the 'synodality' or 'journeying together,' which he sees as essential to the very life of the church."

He also noted that Pope Francis demonstrates that witnessing to the faith involves not just words, but actions.

Wuerl said "Amoris Laetitia" reaffirmed Catholic doctrine on marriage and family life and highlighted the teaching of recent popes on those subjects. The document also underscored the importance of discernment and helping people form consciences guided by church teaching, he said.

The journey of faith, he said, also requires support and accompaniment from pastors and other members of the church, so those having difficulty understanding or following that teaching can be helped to accept and live the faith.

That effort to go out, encounter and accompany others is at the heart of Pope Francis' call for today's Catholics to be evangelizing disciples, journeying with others to draw closer to Christ on the path to heaven, Wuerl said.

"Just as Jesus said to his disciples as he prepared to return to his Father in glory, 'You will be my witnesses,' so Pope Francis is calling the whole body of disciples together in a process of discerning the richness of the proclamation of the faith, accompanying one another as we try to embrace and appropriate the faith, and to announce it to the world today as much by our actions as by our words," the cardinal said at the conclusion of his talk.

"What Pope Francis is doing is helping us all understand that to be true witnesses to Jesus we have to walk together in witnessing (to) and supporting one another," he said.

Before the cardinal's talk, John DeGioia, Georgetown University's president, said the concept of a sacred lecture reflects a tradition begun by the early Jesuits to help inform and inspire those seeking to grow in their faith.

Other speakers in the series have included writer Alice McDermott, a Catholic who won a National Book Award for her 1998 novel, "Charming Billy." Last year at Georgetown, she spoke on the topic, "Where There is Sorrow, There is Holy Ground."

In a question-and-answer session after his talk, Wuerl was asked how the concept of journeying together is shaping preparation for the 2018 synod, and he said the church wants to bring Jesus' Gospel to today's world, and needs to hear from young people about "how we do that today?"

The pope, he said, is asking church leaders to engage young people in that process, to find out what their aspirations are, and what issues are important to them.

Afterward, Sinmi Tinubu, a senior studying business at Georgetown who is a member of St. Joseph Parish in Beltsville, Maryland, described her hopes for the upcoming synod.

"I hope the church can figure out a way to connect with people of my age and revive that faithfulness," she told the Catholic Standard, Washington's archdiocesan newspaper. "The church I know is open and welcoming of all people. The church needs to communicate that."

(Zimmermann is editor of the Catholic Standard, newspaper of the Archdiocese of Washington.)

People | Wuerl: Pope sees 'journeying together' as essential to life of church