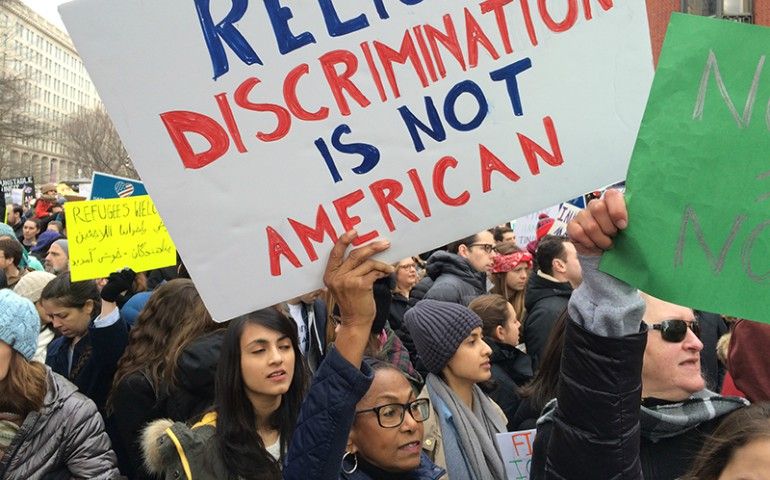 The full U.S. Court of Appeals for the 4th Circuit ruled 10-3 on May 25 to uphold a lower court's decision that barred the Trump administration from implementing its second attempt at the travel ban.

Chief Judge Roger Gregory wrote that changes made to the revised travel ban removing any mention of religion did not fix the fact that the order unfairly and illegally targets Muslims.

The court said the administration's claim that the ban was aimed at protecting national security was a "secondary justification for an executive order rooted in religious animus and intended to bar Muslims from this country."

The scathing opinion consistently referenced Trump's own words on the campaign trail and after he was elected, which it said made clear his true intention.

Because of that religious animus, the court ruled that Trump's executive order could never "survive any measure of constitutional review."

"Surely the Establishment Clause of the First Amendment yet stands as an untiring sentinel for the protection of one of our most cherished founding principles — that government shall not establish any religious orthodoxy, or favor or disfavor one religion over another," Gregory wrote for the majority.

"Congress granted the president broad power to deny entry to aliens, but that power is not absolute. It cannot go unchecked when, as here, the president wields it through an executive edict that stands to cause irreparable harm to individuals across this nation."

The White House has said the temporary ban is needed to improve vetting procedures to ensure terrorists do not enter the United States as travelers or refugees. Justice Department lawyers have argued in court that statements made during a political campaign should not factor into actions taken by an elected official.

But the judges even questioned whether the government established enough of a national security threat to warrant a blanket ban against people from the six targeted countries.

In a separate opinion, Judge Barbara Milano Keenan wrote that Trump needed to show more than "vague uncertainty" about people coming from those countries to deem all 180 million residents as national security risks.

"The president was required … to find that entry of any members of the identified class would be detrimental to the interests of the United States," she wrote.

Acting Solicitor General Jeffrey Wall told the judges during oral arguments earlier this month that it was not their job to psychoanalyze a president. Wall argued that candidates' statements in the midst of a contentious campaign are irrelevant, and that scrutinizing them after the fact would chill political debate in future campaigns.

In his ruling, Gregory wrote that campaign comments absolutely matter. "To the extent that our review chills campaign promises to condemn and exclude entire religious groups, we think that a welcome restraint," he wrote.

Critics who have called Trump's revised travel ban "Muslim Ban 2.0," based on his campaign pledge to stop Muslim immigration into the U.S., celebrated Thursday's ruling.

"Over and over we are seeing the courts and the public soundly reject this blatant attempt to write bigotry into law," said Margaret Huang, executive director of Amnesty International USA. "Rather then wait for yet another court to rule against it, Congress can and must take action that will end this discriminatory and dangerous policy once and for all."

A ruling is expected any day in a similar case from a three-judge panel of the U.S. Court of Appeals for the 9th Circuit, based in San Francisco.

At issue is Trump's plan to ban most travel from six countries — Iran, Libya, Somalia, Sudan, Syria and Yemen — for 90 days and suspend the entire refugee program for 120 days.

Trump first tried to implement the travel ban by signing an executive order on Jan. 27. That order was in effect for seven days before it was blocked by a federal judge in Seattle, a ruling upheld by the 9th Circuit.

Rather than appeal to the Supreme Court, Trump revoked his first travel ban and issued a revised version on March 6. That order was blocked by a federal judge in Hawaii hours before it went into effect, as well as another judge in Maryland. The Justice Department appealed both rulings.

Now that the administration has lost in the 4th Circuit, the Justice Department could appeal to the Supreme Court. The high court, now at full strength with the addition of Trump's nominee, conservative Justice Neil Gorsuch, has divided in the past on immigration issues.

Those 4-4 ties, which were commonplace following the death of Justice Antonin Scalia, could tilt in Trump's favor with Gorsuch on the bench.

Editorial: Fear of refugees is unworthy of American ideals