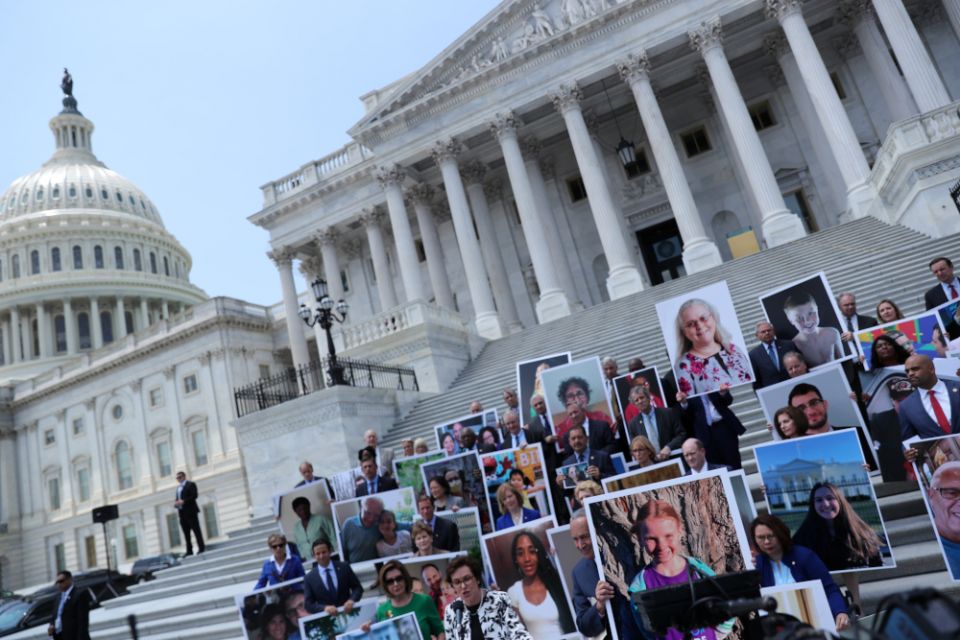 Congressional Democrats stand outside the U.S. Capitol July 9, 2019, showing the faces of Americans they claim "would be hurt if the Trump administration and Republicans succeed in their effort to strike down the Affordable Care Act." As a U.S. federal appeals court considers the constitutionality of the Affordable Care Act, the Catholic Health Association declared its support for the law and said access to health care is a basic human right. (CNS/Reuters/Jonathan Ernst)

Washington — As the U.S. Court of Appeals for the 5th Circuit considers the constitutionality of the Affordable Care Act, the Catholic Health Association voiced its support for the act, declaring access to health care a basic human right.

Catholic Health Association is a national organization comprised of 600 hospitals and 1,600 other health care facilities that provide compassionate, nonprofit care to Americans.

In a statement released July 9, Catholic Health Association emphasized that the Affordable Care Act brings health care to 20 million Americans, 12 million of whom are low income individuals. "In addition to being harmful to patients’ health, the lack of coverage adds unnecessary expense to our nation’s health care system and deprives patients with an equitable opportunity for a healthy, productive life."

In its statement, Catholic Health Association highlights that patients without health insurance are four times more likely to be hospitalized for preventable maladies, making them more difficult and more expensive to treat.

Despite that, the Affordable Care Act is currently under fire for the second time. Back in 2012, an opponent filed a lawsuit arguing that the individual mandate, which requires most individuals buy health insurance or pay a penalty, was unconstitutional. The case reached the Supreme Court, which ruled the mandate constitutional.

Then, in 2017, Congress passed a tax law which did not repeal the mandate, but reduced it to "zero dollars." People are still required by law to purchase state subsidized health insurance, but there is no penalty for ignoring the law.

On Dec. 14, 2018, a Texas federal court ruled that the individual mandate is no longer constitutional, and that, as a result the entire Affordable Care Act cannot function. The court ruled that the individual mandate is not "severable" from the rest of the Affordable Care Act. The decision came in a lawsuit filed by the Republican state attorneys general and governors in at least 18 states.

Now the matter is before the 5th Circuit, based in New Orleans. A three-judge panel heard oral arguments July 9 in the case, Texas v. United States.

CHA filed a brief as amicus curiae, or a friend of the court, along with four other national hospital organizations. Altogether, the brief represents 5,000 hospitals and health care facilities across America. In the brief, they argue that the Affordable Care Act is, in fact, separable from the individual mandate, as evidenced by the fact that the system has existed since 2017 with a "zero dollar" penalty.

Not only that, but the brief outlines all of the programs attached to Affordable Care Act that will shut down if the 5th Circuit finds the law unconstitutional. These include in-home care for the elderly, programs combating the opioid crisis and other programs that tackle substance abuse issues.

They argue that repealing the Affordable Care Act completely will leave millions without insurance, harming not only patients, but also hospitals.

"Without coverage, Americans suffer," they wrote. "Those without insurance coverage forgo basic medical care, making them more difficult to treat when they do seek care. This not only hurts patients; it has severe consequences for the hospitals that care for them. Hospitals will bear a greater uncompensated-care burden, which will force them to reallocate limited resources and compromise their ability to provide needed services."

Democrats have moral obligation to talk about health care intelligently

The bad theology behind opposing the contraception mandate

What's next in the contraceptive mandate case?

Obamacare religious exemption hard to get