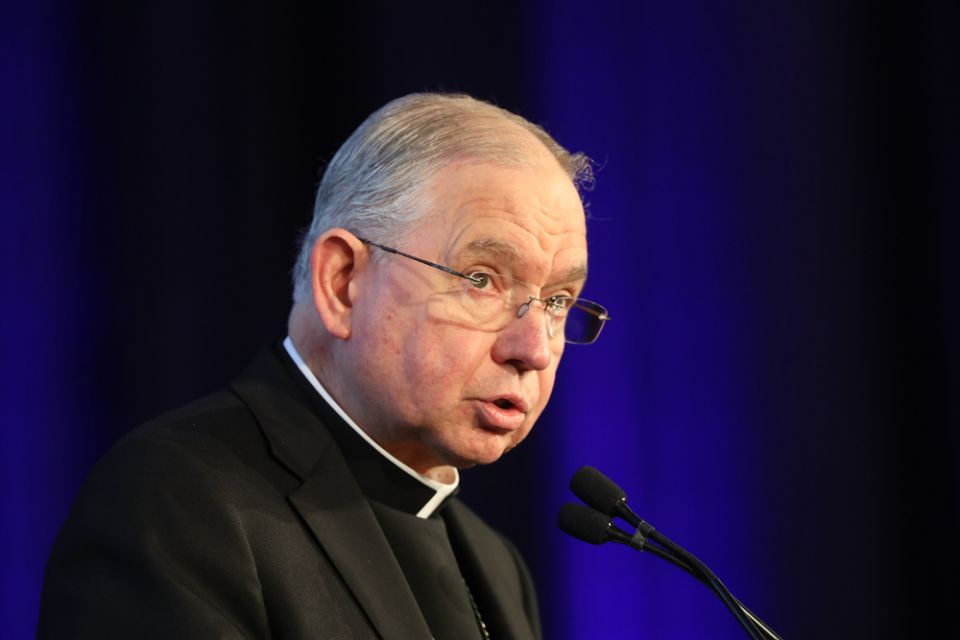 Archbishop José Gomez of Los Angeles, vice president of the U.S. Conference of Catholic Bishops, speaks on the first day of the spring general assembly of the bishops' conference in Baltimore June 11, 2019. (CNS/Bob Roller)

Baltimore — The U.S. bishops' quadrennial document that provides guidance to voters on Catholic social teaching during a presidential election year won't change for 2020 but will be supplemented by a brief letter and four 90-second videos that reflect the teaching of Pope Francis.

The document, "Forming Consciences for Faithful Citizenship: A Call to Political Responsibility," will be distributed by the U.S. Conference of Catholic Bishops beginning early next year after the new materials are developed.

Archbishop José Gomez of Los Angeles updated the status of the supplementary materials in a brief report June 11, the first day of the bishops' spring general assembly in Baltimore.

"These two new (additions) are not mainly to inform but to inspire," explained Gomez, bishops' conference vice president, who chairs a working group developing the new materials. "The existing document already does plenty to explain church teaching and will remain untouched. These two new documents will motivate people to act on that teaching."

The letter will be limited to 750 words, at the urging of communication consultants. The videos will address different issues addressed by Catholic social teaching and they can be combined into one longer video, the archbishop said.

The working group includes the chairman of several bishops' conference committees, including those that traditionally address domestic and international public policy issues as well as those that oversee evangelization and catechesis, doctrine, cultural diversity and communications.

The group has prepared two drafts of the materials since January, Gomez said, and will finalize them to present them to the bishops' confernece Administrative Committee, which will next meet in September. The full conference will vote on the materials during the bishops' fall general assembly in November.

"The goal is to finish the videos by end of January, before any (primary) election takes place," Gomez said.

Several bishops offered suggestions on topics for the materials to address, including the importance of maintaining civility in public life and to heal the rift that has developed in recent years among adherents of opposing political views.

Gomez offered no insight into what message the final products will contain but said that the working group understands how important it is "to get many viewers and to hold their attention."

The Faithful Citizenship document has been issued every four years since 2007 and underwent revisions in 2011 and 2015. The first version was a compilation of a series of documents that had been issued in advance of presidential elections since the 1970s.

Children lead the way to stop violence, save Earth