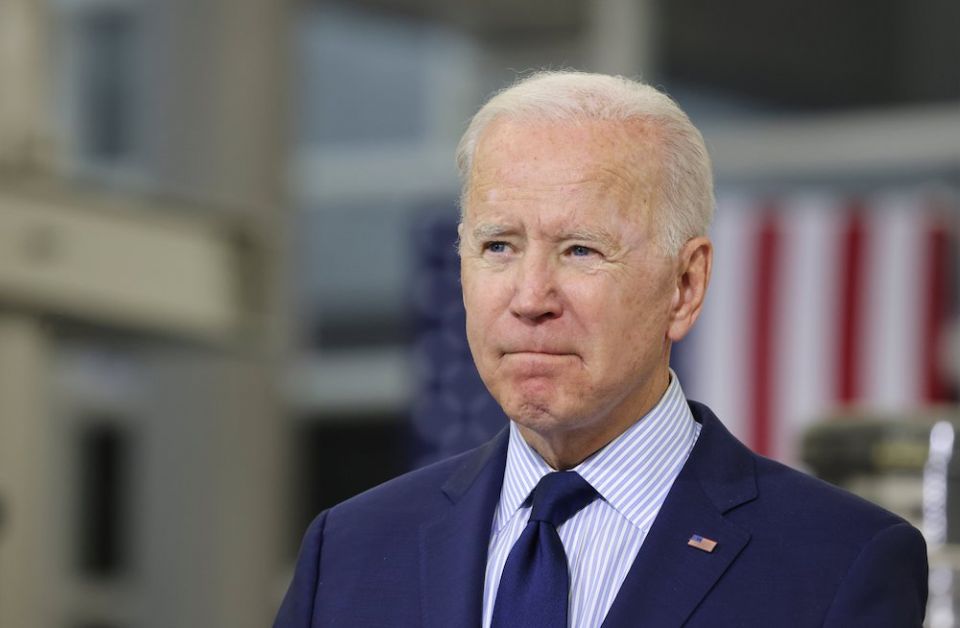 President Joe Biden delivers remarks on the economy during a visit to Cuyahoga Community College in Cleveland May 27, 2021. (CNS/Reuters/Evelyn Hockstein)

Washington — The chairman of the U.S. bishops' pro-life committee called on Congress May 28 to preserve the Hyde Amendment in any federal budget proposal and "to work toward a budget that truly builds up the common good of all."

The head of the Catholic Health Association (CHA) of the United States likewise called on Congress to support "the long-standing prohibition of federal funding for abortion and maintain the Hyde Amendment."

Earlier the same day, President Joe Biden unveiled his proposed budget of $6 trillion for fiscal year 2022 that would include spending to improve and modernize the nation's infrastructure, provide free pre-K and community college, and increase domestic programs aimed at boosting public health and helping the poor.

His plan does not include the Hyde Amendment, which has been included in spending bills since 1976 to prohibit federal tax dollars from directly funding abortion except in cases of rape, incest or when the life of the woman would be endangered.

"There are aspects to President Biden's budget proposal that will assist vulnerable people. However, Congress must reject the administration's proposal to subsidize the deaths of unborn children," said Archbishop Joseph Naumann of Kansas City, Kansas, chairman of the U.S. Conference of Catholic Bishops' Committee on Pro-Life Activities.

"No member of our great nation is weaker, more vulnerable, or less protected, than the child in the womb," he said.

However, "we are extremely disappointed that it would allow for federal funding of abortion," she said.

"Since the founding of U.S. Catholic hospitals in the 19th century, the sanctity of human life has been at the core our mission," Haddad said.

"At a time when our country has seen so much death resulting from COVID-19, we believe the president should be solely focused on supporting the lives of those most in need, including the lives of unborn children," she added.

Named for the late Rep. Henry Hyde, an Illinois Republican who served in the House of Representatives from 1975 to 2007, the amendment has long enjoyed bipartisan support, even from Biden during his 36 years in the U.S. Senate.

It was excluded, however, in the $1.9 trillion American Rescue Plan Act that was signed into law March 11 by Biden. The U.S. bishops called its absence "unconscionable."

Biden and Vice President Kamala Harris back the repeal of the Hyde Amendment.

"For nearly half a century, the Hyde Amendment and related provisions have protected taxpayers from funding most abortions. These policies have broad support from Democrats and Republicans," Naumann said.

The policies "have been enacted and signed into law by congresses and presidents of both political parties and have been broadly supported by the majority of low-income women, including women of color," he added.

He said that "taxpayer-funded abortion represents a failure to serve women in their maternity by funding despair and death instead of hope and life."

"All women deserve the resources to enable them to fully care for and nurture their baby, to welcome them in a loving, stable environment," the prelate said. "These resources would be far better spent supporting women in crisis pregnancies and struggling new mothers so that no woman ever feels economic pressure to have an abortion."

Naumann urged lawmakers to produce a budget that "truly builds up the common good of all."

"This should include the many proposals in the president's budget submission that seek to protect vulnerable people" and also "must preserve the Hyde Amendment and related provisions which have protected millions of unborn babies, and mothers in difficult circumstances, from the tragedy of abortion."

Since early May, the nation's diocesan Respect Life coordinators and the Secretariat of Pro-Life Activities of the U.S Conference of Catholic Bishops have been encouraging Catholics to speak out against the repeal of the Hyde Amendment.