by Lucy Grindon
Politics
This article appears in the Election 2020 feature series. View the full series. 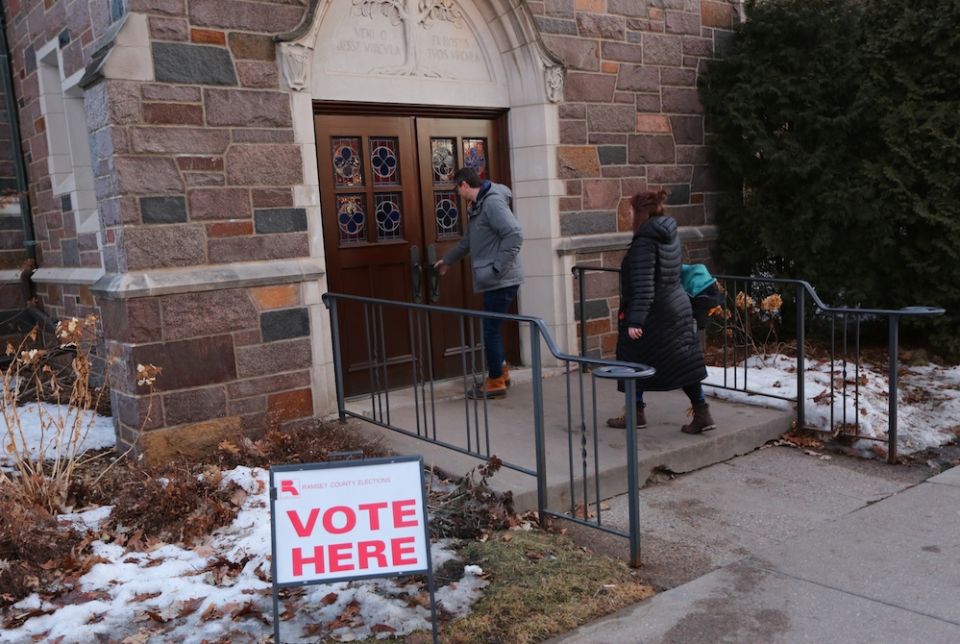 People enter Nativity of Our Lord Church in St. Paul, Minnesota, March 3, when the church served as a polling place for the Super Tuesday presidential primary. (CNS/Catholic Spirit/Dave Hrbacek)

"There is no Catholic vote — and, it's Important."

That was the title of a Sept. 17 Zoom panel sponsored by the Hank Center for the Catholic Intellectual Heritage at Loyola University in Chicago on the 2020 presidential election.

The speakers — Steven P. Millies, professor of public theology and director of the Bernardin Center at Catholic Theological Union in Chicago; pundit E.J. Dionne Jr.; journalist Emma Green, and Michael Bayer, the discussion's moderator — discussed the contradictions in the event's title. The quote comes from Dionne, and is a reference to both the importance of Catholics in the U.S. electorate and their statistical tendency to mirror the general U.S. population.

One online critic stated that the group was skewed in favor of Democratic candidate Joseph Biden. The panelists disagreed.

In response to the accusation of partisanship, Millies said that in his 15 years teaching American government at the University of South Carolina, he cultivated a reputation among students for not falling on either side of the political spectrum. "The reason was because I don't," he said. "Neither left nor right, but Catholic, is good enough for me."

But Millies said the past few years have forced him to express views that appear partisan.

"Something changed when this president announced his political candidacy. There's no denying it," he said. "And to defend the integrity of the political system, it became necessary, I found, to appear to be partisan, because I am against lying, and I am against deploying the organs of a government that belongs to us for partisan, personal political gain."

"There's plenty I disagree with Joe Biden and the Democrats about, but I must say, if this seems like a pro-Biden pitch, it is only because the stakes aren't partisan. The stakes aren't left versus right, Democrat versus Republican. The stakes are whether or not we're going to continue to all be Americans trying to solve these problems together, or whether we're going to divide permanently into two warring camps, and the government just becomes a prop for whoever happens to win. I cannot be non-partisan about that," Millies said.

Dionne noted that Catholic voters have split along racial lines in recent elections, pointing out that Latino Catholics overwhelmingly voted for Hillary Clinton in the 2016 presidential election, while the white Catholic vote has become increasingly Republican, which he attributed partly to the church's continuing loss of young people.

From left: Steven P. Millies, professor of public theology and director of the Bernardin Center at Catholic Theological Union in Chicago; pundit E.J. Dionne Jr.; and journalist Emma Green take part in a discussion of "the Catholic vote." (NCR screenshots)

"I think many Catholic voters vote conservative and Republican for reasons other than abortion. Some of it is social class, you see some differences by region, and some of it, we have to be candid about [it], is race," Dionne said. "I think we make a mistake if we ignore abortion, obviously, but I also think we can make a mistake if we use abortion as a one-and-only reason why there are a whole lot of conservative Catholics out there."

The speakers discussed at length how the Catholic vote has become synonymous in public perception with the issue of abortion. Green, who covers politics and religion for The Atlantic, said many of the voters she's spoken to in her reporting support Donald Trump because of his anti-abortion stance and judicial appointments, now a central issue with the death of Supreme Court Justice Ruth Bader Ginsburg Sept. 18, the day after the panel discussion.

But Green said some Catholics she has spoken to share a broader approach to life issues (which Bayer and Dionne pointed out is also held by Pope Francis), and are aligning with Biden. She recently interviewed Sisters of the Immaculate Heart of Mary in Scranton, Pennsylvania, whom she says are reaching out to voters frustrated by the reduction of Catholic faith into a sole focus on abortion.

"The argument that they made, over and over again, was that being pro-life has to be framed more expansively than just being about abortion," she said. "They seem to tap into a kind of dedicated Catholic voter who really cares about abortion, but [is] tired of the way that that gets flattened and the way the Catholic faith gets flattened in the 2020 election."

The sisters, Green said, also see police violence as a life issue, and they reflect the cultural shift that has taken place following the killing of George Floyd as more white Americans have acknowledged the persistence of racist police violence in the United States. Scranton's Immaculate Heart of Mary community has embraced the Black Lives Matter movement by adding a Black Lives Matter poster to the campus of Marywood University.

Another cultural shift Green noted has been the increased activity of women voters. "We saw in 2018 that women were the deciders, and all evidence suggests that women are [going to] be the deciders again in 2020," she said. One group to keep an eye are suburban women who have been politically inactive or leaned Republican for most of their lives, some of whom are Catholic, who "may be going through an awakening."

"I wrote a story earlier this year about the Senate races in Georgia," Green said. "One of the things that people kept pointing me to was the way that women voters in the suburban counties of Atlanta have become politically motivated and activated in a way that's totally unprecedented."

Assessing how Catholic voters may view the contrast between Trump and Biden, Dionne described Biden as "organically Catholic in a deep way," in contrast to Trump, who he said "is not particularly religious, but yet, is casting himself as the paladin, the man who will restore the power of white Christianity."

Dionne noted many U.S. Catholics live in critical swing states for the 2020 election, including Pennsylvania, Michigan and Wisconsin. According to  The New York Times, Wisconsin has had the third-highest number of COVID-19 cases per capita of any state over the past seven days.

Millies stressed that responses to the COVID-19 pandemic should also be considered a life issue. "For scale, consider that there have been stretches of time during our time dealing with COVID when daily deaths have met or exceeded the number of abortions performed daily, and in a moral perspective, whether it's a death by abortion or COVID-19, we're talking about the deaths of innocents," he said.

He also highlighted the negative effects beyond sickness that COVID-19 has caused in the U.S., citing increased unemployment, hunger, domestic violence and the disproportionate impacts of COVID-19 on communities of color.

"We're living through an extraordinary failure of governing, and it didn't have to happen, and it has taken a remarkable toll on human life," he said. "Catholics should be thinking about that in the United States. Our consciences should be shocked and should be scandalized."

Your thoughts on Kamala Harris as Veep pick