Despite hurdles, Hillary Clinton may be unbeatable 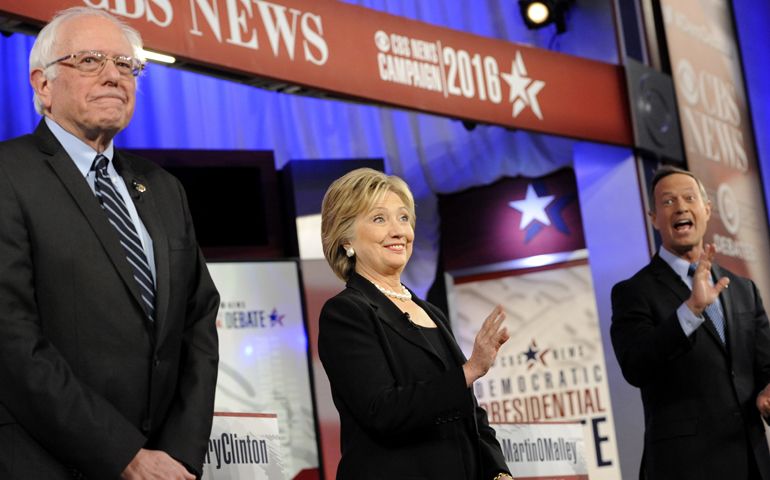 In the Dec. 4-17 issue and on NCRonline.org, I wrote about the Republican presidential primary contest and, as predicted, Sen. Ted Cruz has begun his rise in the polls, with one poll of Iowa voters who have attended a caucus previously showing him leading the pack. More disciplined than Donald Trump, and only slightly less rabid, my money remains on Cruz to go to the front of the pack.

This time, let's look at the far less interesting Democratic contest. According to the latest RealClearPolitics polling averages, former Secretary of State Hillary Clinton has a substantial lead in the national polls, with 56 percent of likely Democratic primary voters, compared to just 30 percent for Vermont Sen. Bernie Sanders. Former Maryland Gov. Martin O'Malley trails badly with only 2 percent in the national polls.

In Iowa, the RealClearPolitics average has Clinton ahead also, but by a smaller margin, 52 percent to 39 percent for Sanders, and O'Malley polling at 5 percent. In New Hampshire, Sanders has a small lead over Clinton, 46 percent to 44 percent, with O'Malley again coming in at 5 percent.

The voting begins Feb. 1, with the Iowa caucuses. The following week, voters in New Hampshire will hold their first-in-the-nation primary. Between now and then, there are only two things that can conceivably damage Clinton's apparent lock on the nomination.

First, there is one more debate in January. Clinton has appeared poised and in charge at debates so far, but at any debate there are potential banana peels lying about the floor. Clinton's support is wider than it is deep, and if she were to get thrown off her game, the polling numbers could change. The possibility exists, but Clinton is also one of the toughest politicians in the country and should she encounter a banana peel, she is as likely to pick it up and throw it at the feet of an opponent as to slip on it herself.

The second hurdle is much more threatening, not least because it is shrouded in mystery: Clinton and her staff are still under investigation by the FBI over her private email server while serving as secretary of state, and her handling of classified information on that server. Indeed, it is one measure of how dominant a candidate she is that the mere fact of such an investigation has not sunk her candidacy already.

In such investigations, even when the initial concern is one thing, often the investigators learn that someone lied to them, sometimes about something unrelated, but also a crime. Clinton handled 11 grueling hours of questioning by the Republican House Committee, but no one really knows the status on the FBI investigation.

Democrats have largely accepted Clinton's other liabilities. She may not be viewed as trustworthy or particularly likable -- we all remember then-Sen. Barack Obama's withering "You're likable enough" line in 2008 -- but she is widely viewed as competent, smart and decisive. Astonishingly, despite being on the public stage for more than 20 years at a time when many voters distrust all elites, Clinton appears not to have a "sell-by" date.

When running a Google search for any updates on the FBI probe I might have missed, there, on the second page of the search, was an item from 1997 when Attorney General Janet Reno was investigating Clinton fundraising. Clinton has not only been around for a long time, she has been one of the most polarizing figures in politics for most of that time, softened a bit by her time at the relatively nonpartisan State Department.

The reason that her long tenure has not counted against her is largely attributable to the single fact that is most driving her campaign: Many, many Americans think it is time to have a woman president. If, as expected, she garners the nomination, this sense that history is being made will provide strong, consistent wind for the sails of her campaign.

America has also never elected a socialist as president, and one of the shockers of the campaign season has been the appeal of Sanders, the 74-year-old, Brooklyn-born, self-described socialist senator from Vermont. Part of Sanders' appeal has been that he is addressing the core socio-economic issues with the kind of strong populist message that went out of style with Bill Clinton and the "new Democrats" back in 1992.

The dirty, not-so-secret secret about the Democratic Party, and the Clintons especially, is that they have been as kind to Wall Street as have the Republicans. Sanders tells it like it is: The socio-economic game is rigged to benefit plutocrats, the middle class is getting screwed, and, since the Supreme Court decision in Citizens United, the billionaire class is doing its best to purchase American democracy.

Some commentators have portrayed Sanders' surprisingly strong showing in the polls as a variety of the anti-establishment mood of the country seen in the candidacies of Trump and Ben Carson on the Republican side. It is true that all three peddle a populist message, and that this populist message is aimed at the failures of America's governing elites, but there the similarities stop.

Sanders is not a bigot. He is not a nonpolitician. He is in favor of strengthening government, not weakening it. And as terrorism and foreign policy take a more prominent role in the campaign, he was right to vote against the Iraq War, a war that Clinton supported.

But Sanders' campaign has leveled out at about a third or slightly more of the Democratic electorate. He can't beat Clinton.

O'Malley can't beat Clinton either, and one of the other shockers of this campaign is that O'Malley did not become the vehicle for anti-Clinton sentiment. Sanders got into that lane sooner than O'Malley expected and has not relinquished it.

Unlike the other two, O'Malley has a great record of accomplishment for a Democratic candidate: He actually passed gun control, same-sex marriage and a minimum-wage increase as governor. He lacks the Wall Street ties the Clintons have. Unlike Sanders, you can imagine O'Malley winning a general election. But his candidacy never caught fire and he is now running for a seat in the cabinet.

It is not unlikely that the GOP race could extend into March and April. I suspect Clinton will wrap up the Democratic contest by South Carolina's primary on Feb. 27. Then, the Democrats have to wait and hope that the FBI does not rain on Clinton's coronation parade. Given the current state of the GOP, it is hard to imagine anything getting in the way of America electing its first woman president next November.

Column | Despite hurdles, Hillary Clinton may be unbeatable

Anti-Muslim demagoguery on the campaign trail

No religious test for public office