With election over, Catholics in Bolivia hope to bridge country's religious divisions 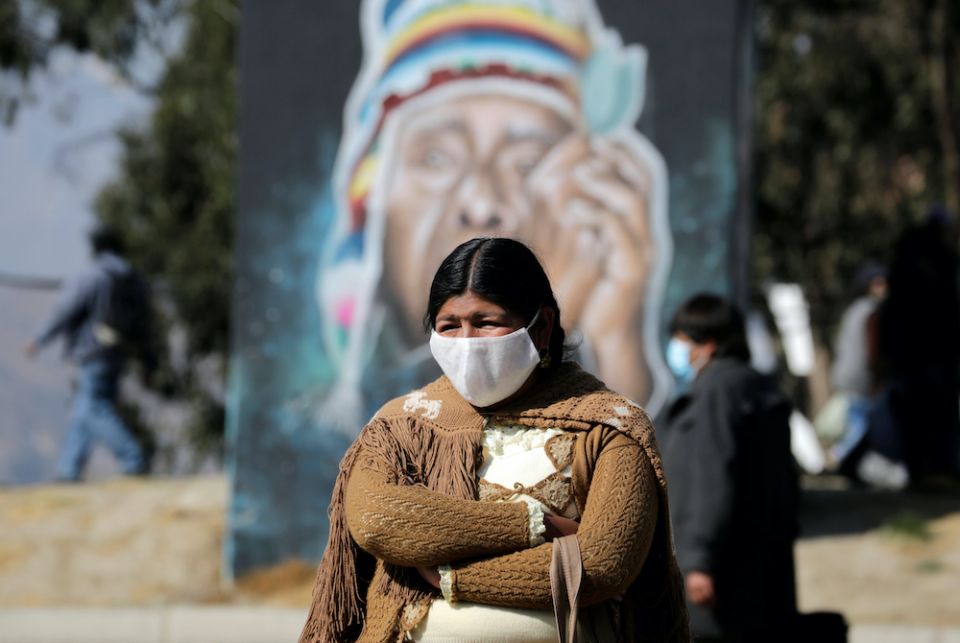 An Aymara woman wearing a protective mask stands at the blockade point set up by supporters of former President Evo Morales in El Alto, Bolivia, Aug. 10, when protesters were demanding quick presidential elections, postponed multiple times due to the COVID-19 pandemic. The election was Oct. 18, and results were announced Oct. 23. (CNS/Reuters/David Mercado)

Now that Luis Arce's landslide victory in Bolivia's election has been confirmed, the socialist economist has the mission of reuniting an incredibly polarized society — a task that is also being undertaken by the local Catholic Church.

Bolivia, a landlocked South American country sandwiched between Brazil and Peru, has been profoundly divided since the 2019 political crisis, when Morales, then seeking a fourth presidential term, was accused of electoral fraud and had to resign after a huge wave of protests.

The epicenter of the revolt was Santa Cruz de la Sierra, in the eastern part of the country, with a massive participation by the middle class. Morales retained much of his influence among peasants and the lower classes in the Andean region, in the west.

The fierce political clashes were accompanied by divergent use of religious symbols.

One of the most important civic leaders in Santa Cruz, Luis Fernando Camacho, frequently appears in public with a rosary in his hands. Camacho also conducted prayers during rallies and marches in a somewhat Pentecostal manner, as described by the sociologist Julio Córdova, an expert in Bolivia's religious dynamics. 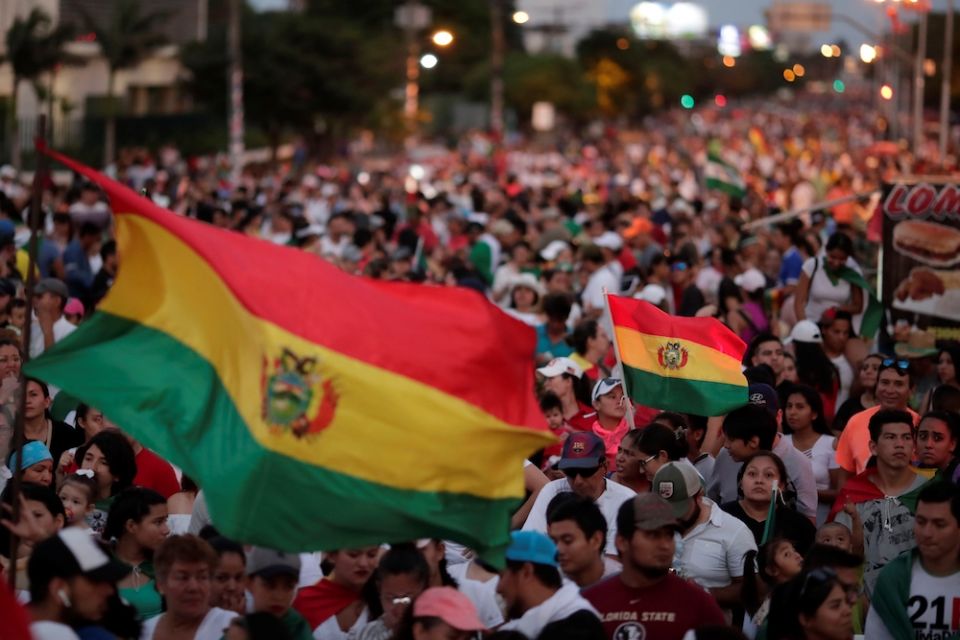 Demonstrators in Santa Cruz, Bolivia, take part in an Oct. 27, 2019, protest against President Evo Morales and the election results after an election gave Morales a fourth consecutive term. (CNS/Reuters/Ueslei Marcelino)

On the other side, Morales and his supporters largely employ imagery connected with native Andean spiritualities. Those remain very relevant among the working classes and are often mixed with Christianity in popular religiosity.

In official ceremonies, Morales was frequently accompanied by amautas and yatiris, traditional Andean spiritual leaders. Camacho and other members of the opposition movement promised many times that they would guide Bolivia back to God's way, defining the Andean rituals as "satanic."

On Oct. 14, at the tail end of the 2020 campaign, such religious polarization was revived.

Arce's final rally was concluded with a ritual led by amautas in the Andean city of El Alto, explained Córdova. "Offerings were made to Pachamama with the most significant Andean mountains in the back, each of them representing an achachila, a guardian spirit," the sociologist told NCR.

In Santa Cruz, Camacho — who also ran for president — led his final rally in El Cristo Redentor square, preaching with his allies and entrusting Bolivia to God. "So, the two opposing cities also showed opposite religious practices, both connected to distinct social, ethnic and class segments," said Córdova.

Córdova doesn't expect president-elect Arce to keep Morales' public displays of Andean rituals, which had an important role in consolidating popular support to his administration. 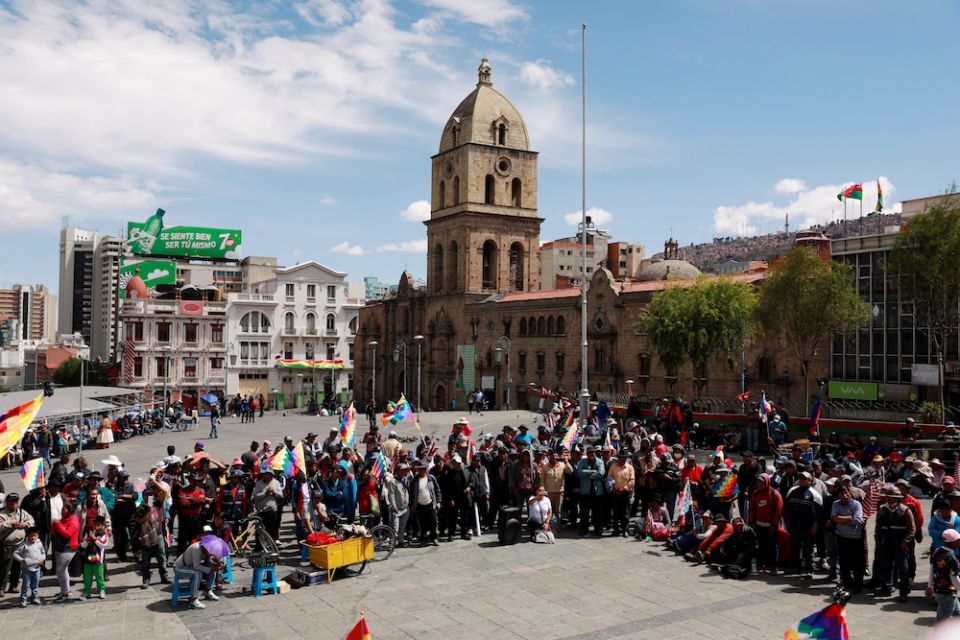 The church hopes that Arce will open direct channels of dialogue with Catholic bishops, something that was not really possible with Morales.

"He had a great belligerence toward the bishops, whom he called the 'hierarchy,' " Fr. José Fuentes, adjunct secretary general of Bolivia's bishops' conference, said about Morales. "He always wanted to dissociate the episcopate from the Catholic people in general."

Pope Francis, however, has always been praised by Morales, who famously presented the pontiff with a crucifix in the shape of a hammer and sickle when Francis visited Bolivia in 2015. After Arce's victory for their party, Morales claimed Francis had made a congratulatory phone call to him. (The Vatican has not confirmed the call.) 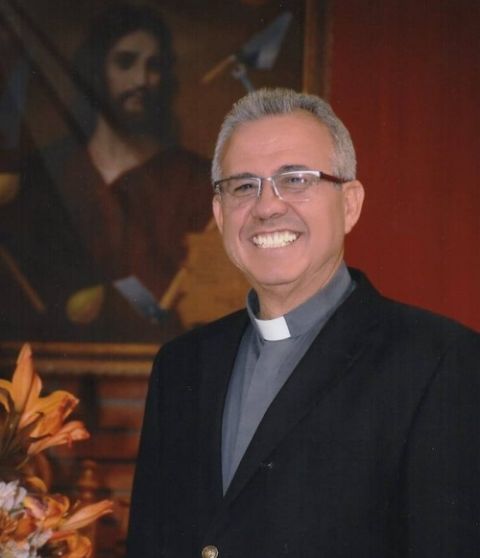 Among many challenges, Arce will have to deal with the opposition of the political elite and of the recently mobilized middle classes, whose movement hasn't been weakened by the electoral defeat. "Arce has to show that his administration is for everybody, beyond regionalisms and other social divides," said Fuentes.

That will be the social role of the church, too, according to Juan Carlos Núñez, director of Fundación Jubileo, a Catholic research institute that has the goal of helping to develop democracy in Bolivia.

"The church has historically played a role of catalyzing the dialogue between different sociopolitical segments," Núñez told NCR. "The bishops' conference will certainly keep doing so."

Indeed, the church was fundamental in the effort to support the institutions during the 2019 crisis, said Fuentes.

"The church backed the peaceful protests against the electoral fraud but with a certain neutrality [in regard to their political leaders]," said the priest.

"When Morales resigned and left the country, causing a violent reaction among some groups, the church intervened to reunite diverse sociopolitical movements in order to find an institutional solution," Fuentes said.

For two days, the country was left without any government, because all the politicians in Morales' line of succession also resigned.

The bishops' conference, along with the United Nations, the European Union, and the Spanish Embassy, helped to build a quick solution, and Sen. Jeanine Áñez took office.

"But the church kept a prudent distance and never tried to take advantage of that moment," said Fuentes. "The episcopate never expressed, for instance, a direct identification with Áñez or Camacho."

Camacho's and Áñez's excesses — she exhibited a large Bible when she assumed power, saying that "God has allowed the Bible to come back into the palace" — were, in fact, criticized by the church, added Núñez.

Since then, the Catholic Church has continually emphasized the need to keep a peaceful atmosphere. "Over the past two months, we released different statements in defense of the electoral court and its ability to organize transparent elections," said Fuentes. "We also stressed that the Bolivian people should accept the results."

Although Santa Cruz's civic committee, one of the key movements in the 2019 uprising against Morales, called for a general strike to denounce alleged irregularities in the electoral process, even Camacho ended up accepting Arce's victory. 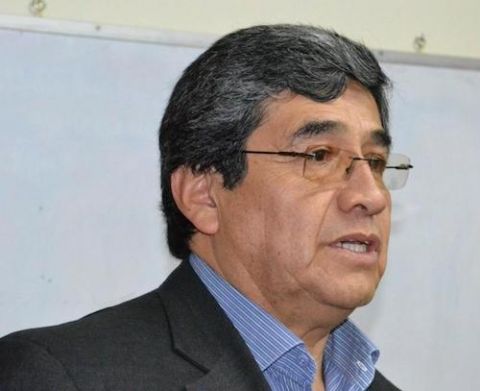 "Now the country has many serious problems to solve. In the rural milieu and in the urban peripheries, there's a big concentration of extreme poverty that must be fought," Núñez said.

Especially in the recent political crisis, the church has been working to assist the poorest, with programs directed towards assisting women, elders and children in rural areas. All such initiatives have needed reinforcement during the ongoing pandemic.

The church's assistance programs are obviously not enough, and Bolivian society needs governmental action to recover its way towards economic growth. Some social segments, particularly traditional communities, expect that new paths can be opened.

Trinitarian Sr. Sofia Chipana Quispe, a theologian and member of the Aymara indigenous people, said she hoped that native teaching on the respect for Madre Tierra (Mother Earth) would be more valued by Arce's administration.

Chipana Quispe also said there has been a process of search for ancestral Andean spiritualities over the past few years, which is often connected with community mobilization and the struggle for traditional lands. 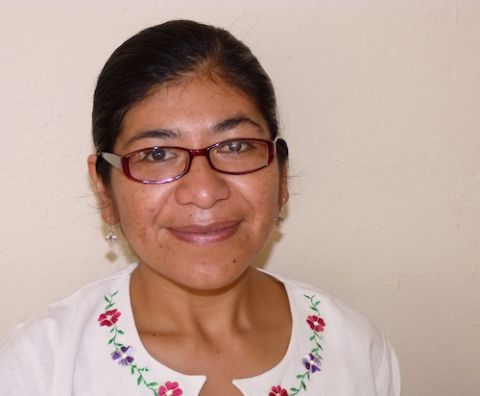 "For many traditional peoples, labor organization and ancestral spirituality walk side by side," she said. "Camacho's … platform, which includes a kind of hegemonic Christianism, aims to dismantle such dynamics."

The theologian expressed hope about Arce's vice president, David Choquehuanca, who is an Aymara politician and served as Morales' foreign minister for more than a decade.

"He's very prestigious among the traditional communities and is deemed an Andean philosopher," said Chipana Quispe. "He may take the country in the direction of our Constitution, which recognizes the richness of the traditional peoples."

Catholicism in Bolivia, which comprises about 70% of the people, is hugely diverse. While Andean communities can successfully share Catholic beliefs and traditional values, conservative approaches are more common among residents of Santa Cruz de la Sierra, for instance.

One way or the other, Fuentes noted that the church's credibility continues to be the highest among Bolivian institutions, according to recent polls.

"Such a reliability can be an instrument to rebuild communion among all Catholics, beyond every possible social and geographic division," said the priest. 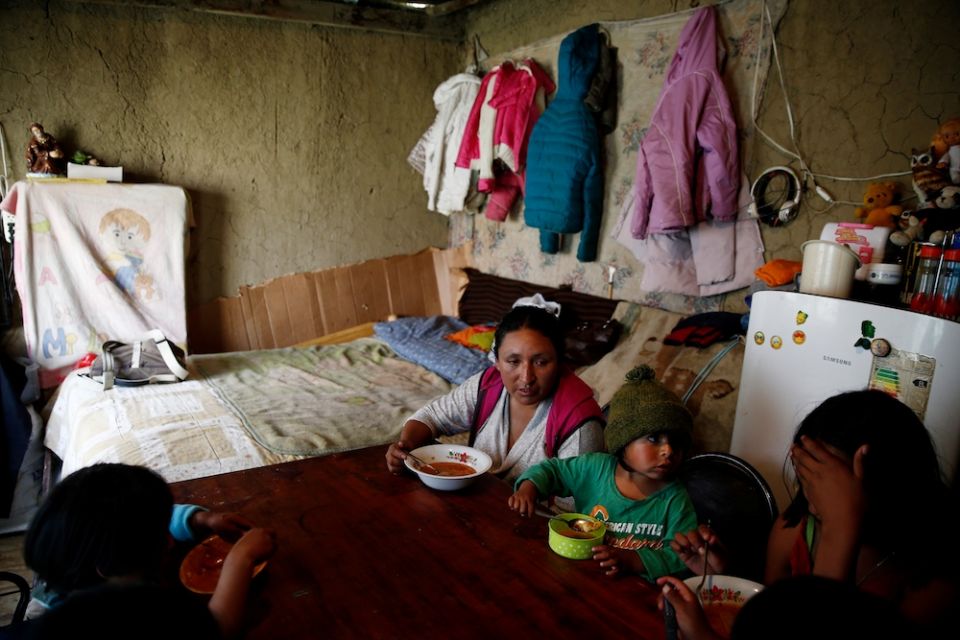 A family eats lunch inside their home during a food and fuel shortage because of a political crisis in La Paz, Bolivia, Nov. 21, 2019. Protesters were keeping gasoline trucks from distributing fuel to El Alto and the nearby capital city of La Paz as part of a campaign to starve both cities of fuel and force the resignation of Interim President Jeanine Anez. (CNS/Reuters/David Mercado)

Politics | With election over, Catholics in Bolivia hope to bridge country's religious divisions