by Madeleine Davison
Politics
This article appears in the Election 2020 feature series. View the full series. 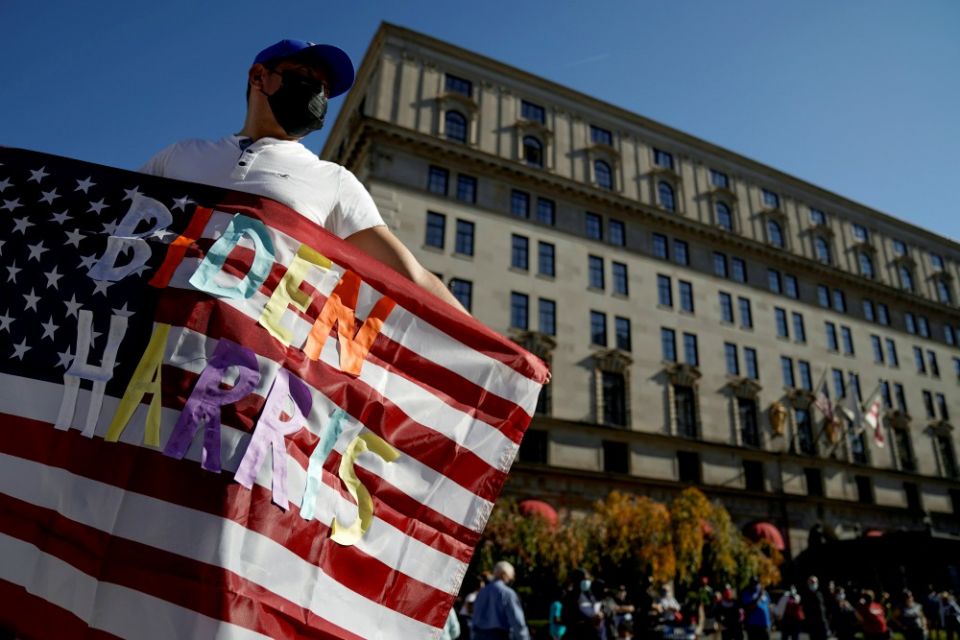 A man in Washington waves an American flag with the words "Biden Harris" near the White House Nov. 8, the day after the news media called the presidential election for Democrat Joe Biden. (CNS/Reuters/Erin Scott)

Religious voters were pivotal to President-elect Joe Biden's victory over President Donald Trump in the 2020 election, but political divisions by race and sect run deep among voters of faith, speakers said in a Nov. 10 panel discussion hosted by Georgetown University's Initiative on Catholic Social Thought and Public Life.

"This election was a referendum on the soul of the country," said Elizabeth Dias, a national correspondent for The New York Times who covers faith and politics. "What is it that we want to become as a country? Who are we, who do we want to be as a people?" 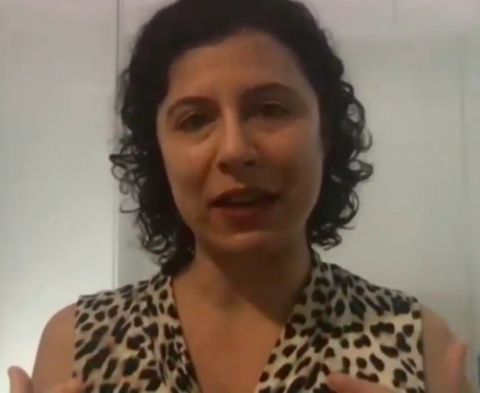 Religious voters played a significant role in the election on both sides, said Elana Schor, a national reporter on religion and politics for the Associated Press.

Throughout the campaign, Biden emphasized his Catholic faith and reached out to voters across a wide range of religious groups, she said.

"That decision by the Biden campaign to invest in that way of speaking about their candidate was a big step forward for Democrats, who have historically ceded that ground to Republicans," Schor said.

"[Trump's campaign] was constantly broadcasting that message, that 'we're here for your priorities,'" Schor said, reflecting on Trump's response to conservative religious voters. "The Trump campaign has a lot to feel good about in terms of faith outreach."

Although Biden won both the electoral college and popular vote, historic turnout and strong support for Trump in certain communities speaks to deep divisions in American society that have existed for centuries, Dias said. 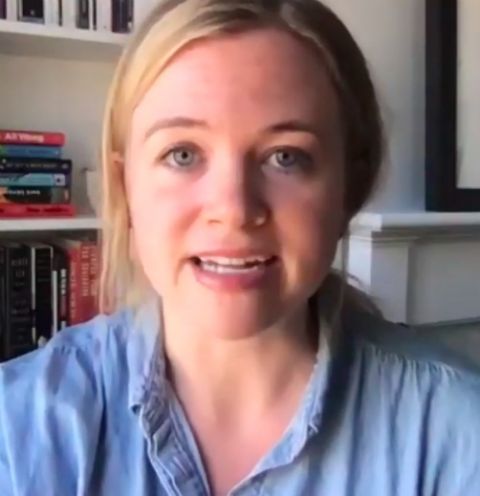 Elizabeth Dias speaks during the Nov. 10 panel on faith and the 2020 election. (Georgetown University screenshot)

On the one hand, the Black Lives Matter movement's moral force motivated Black voters in crucial states for Democrats, Dias said. Democrats attempting to sway religious voters often pointed to racial justice, rather than abortion, as the preeminent moral issue of the day, in contrast to appeals often made by the religious right, she said.

"The role of Black Lives Matter in becoming ... an absolute stake in the ground for what morality is and should be in this country was a huge mobilizing force across the country in key states," Dias said.

On the other hand, white evangelicals and Catholics favored Trump, with 57% of white Catholics backing Trump, down slightly from 64% in 2016, according to AP Votecast.

During Trump's presidency, white evangelicals and the religious right have reached the "pinnacle" of their political power in the United States, with three Supreme Court appointees under Trump and hundreds of new appointments to lower courts that will reshape the judiciary branch for decades, Dias said.

She said white evangelicals and white Christians more broadly flocked to Trump out of a sense of resentment and fear about their status in the nation.

"I'm not sure we can really say this was a resounding defeat of their values," Dias said. "I think we have a giant cultural war going on, and we are going to have to continue to reckon with that."

For many Catholics, abortion is still the most important political issue, White said, superseding other priorities Pope Francis has outlined, such as concern for migrants' rights. Some painted Biden as a fake Catholic because of his pro-choice policies.

"If you're a single-issue voter, and you're a Catholic and abortion is that single issue, you're going to have a hard time getting your mind around that this guy can reconcile being a Catholic with having a pro-choice view, at least when it comes to public policy," White said. "The pro-life lobby will resist him at every turn because of this."

While Biden won the overall Latino vote, he did not do as well as expected among certain Latino communities, particularly in the Rio Grande Valley in Texas and Miami-Dade County in Florida, White said. 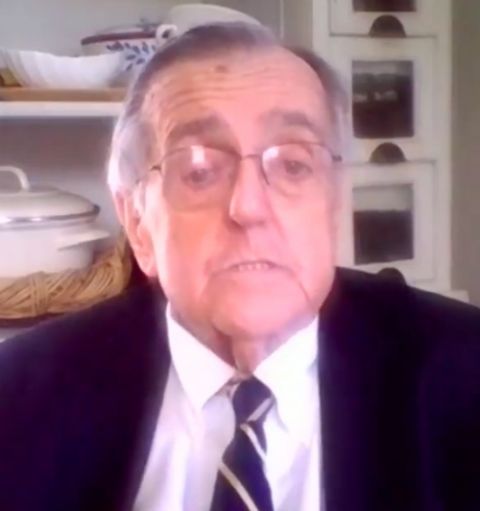 Mark Shields speaks during the panel on faith and the 2020 election. (Georgetown University screenshot)

"The attitude of the press and of the public at large, of viewing Latinos as a monolith, was set on its ear," said Mark Shields, a political commentator for "PBS NewsHour."

The panelists speculated on whether Biden, as president, would be able to bring together vastly different interests to work together on legislative priorities.

Shields was optimistic, saying Biden is known for his ability to work across the aisle.

Schor and Dias, for their part, said the divisions were serious and would be difficult to bridge. Dias said the nation may even be more politically polarized than in 2016, judging by the high turnout.

In his victory speech on Nov. 7, Biden asked Americans to put aside divisions and strive for unity, Dias said.

"My question is — will that tone and will that plea from him actually work on the ground with people?" she said. "And my sense from talking to hundreds and hundreds of people this cycle is that people are very set in what they think."

White said that within the Catholic church, bishops have been divided in their response to Biden's victory. 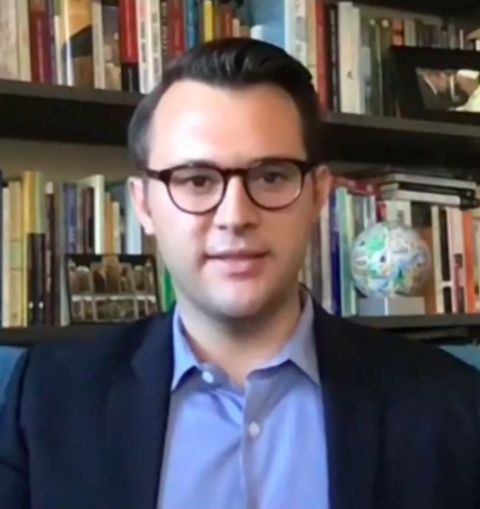 Chris White during the panel on faith and the 2020 election on Nov. 10 (Georgetown University screenshot)

Some, such as Los Angeles Archbishop José Gomez, president of the U.S. Conference of Catholic Bishops, have congratulated Biden and appealed to Catholics to work together after the election. Others have questioned the election results, apparently amplifying Trump's baseless claims about election fraud, White said.

"They're going to have to do some soul-searching. ... Religious leaders would be wise to drive their constituencies toward truth," White said.

Dias said racial and religious divisions in the U.S. are not new, and will likely shape Biden's presidency. The forces and systems that created them trace back to the beginning of the enslavement of Black people on the continent, she said.

"These are questions that every generation needs to address," she said. "And we are in the thick of it in this country."

Faith and the Faithful in the 2020 Election: What Happened? Why? What Now?