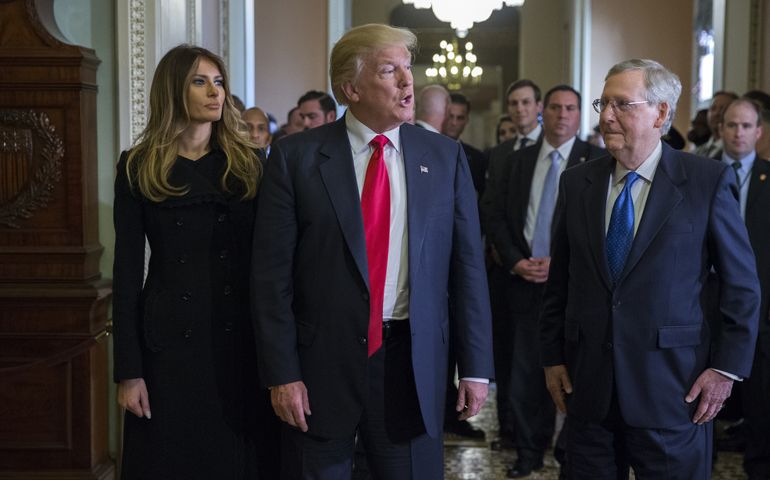 However, some have spoken out with sharply contrasting predictions about the likely consequences of a Trump presidency.

In Germany, Cardinal Karl Lehmann, a former bishops' conference president, told a Nov. 9 gathering of Catholics in Freiburg he was "shocked" by Trump's success, and feared the growing "populist mood" could negatively impact 2017 elections for his own country's parliament, the Bundestag.

Meanwhile, the head of the German church's International Church Affairs commission, Archbishop Ludwig Schick of Bamberg, said the choice of U.S. voters had to be accepted, but added that he also hoped Trump would "rethink and reposition" his pre-election pledges on immigration and ties with other countries, and bring U.S. power to bear in tackling climate change, world inequality and wars in Syria, Iraq and Sudan.

"Trump has to discuss these important issues with truth and clarity — the U.S. is a very important actor in world politics and human rights are on the agenda of many countries," the 67-year-old archbishop told the Cologne-based Catholic Dom Radio on Nov. 9. "The American bishops will surely make their position clear and seek talks with him on their concerns, which above all mean bringing Christian values into politics. They've done the same in the past with all serving presidents."

Austria's Catholic Kathpress news agency carried a congratulatory telegram to Trump from Vatican Secretary of State Cardinal Pietro Parolin, expressing hopes the new president would "promote peace and wellbeing in the world," as well as his Nov. 9 comment to Rome journalists that "the views of presidential candidates often differ from their policies."

Meanwhile, Poland's church-owned Catholic Information Agency, KAI, reported that 52 percent of U.S. Catholics and over 60 percent of Protestants had voted for Trump, and predicted the new president would enjoy good ties with the Vatican, having been a "decided opponent of abortion" and "defender of religious freedom."

The agency said re-elected Florida Sen. Marco Rubio had emerged as a "great hope for Republicans" by providing "one of the strongest pro-life voices in the Senate," but said Trump would leave "most religious matters" to his vice-president Mike Pence.

However, France's Catholic daily newspaper, La Croix, said Trump's defense of "a new American dream" risked becoming "an American nightmare" for those not belonging to the country's "white Protestant population."

The newspaper added that Trump's heated February exchange with Pope Francis over proposals for a wall on the Mexican border indicated likely conflict, which could be exacerbated by the new head of state's plans to make the U.S. "less present on the international stage."

"By placing herself [Democratic candidate Hillary Clinton] in a certain continuity with Barack Obama, the Democratic candidate would have seemed more reassuring to Rome — despite their divergences, Obama and Francis knew to work together," La Croix told its readers on Nov. 10. "With Donald Trump, there are other points of discord, and if the Republican candidate presents himself openly as expected, displaying his climate skepticism and wish to close the American borders to migrants, he'll cut across areas close to the pope's heart."

Europe's Catholic bishops are collectively represented by the Swiss-based Council of Catholic Episcopates of Europe, founded in 1971, which groups 39 bishops' conferences and bishoprics from East and West Europe, as well as by a Brussels-based Commission of European Union Bishops' Conferences, representing over 1,000 bishops from the EU's 28 member-states under a German president, Cardinal Reinhard Marx, and vice presidents from Belgium, Italy, Scandinavia and Lithuania.

In June, the Commission of European Union Bishops' Conferences published its first ever common position paper with the U.S. Conference of Catholic Bishops, setting out priorities for a planned Europe-U.S. Transatlantic Trade and Investment Partnership, which is widely expected to lapse following Trump's victory.

The Polish-born auxiliary bishop Witold Mroziewski of Brooklyn told the KAI agency on Nov. 9 that voters from the 15 million-strong Polish community in the U.S. had been divided in the election, but counted on Trump to honor a campaign pledge to abolish U.S. visa requirements for Poles.

Meanwhile, a senior Catholic commentator from Polish Radio said Trump's visa promise conflicted with his "threats to seal the frontiers," but said she believed most Polish bishops had discreetly welcomed his victory as a "lesser evil."

"American Poles are conservative and were totally opposed to Hillary Clinton, though they may end up thinking again," Malgorzata Glabisz-Pniewska told NCR Nov. 10. "It may well be better to have a president like Clinton with whom the church absolutely disagrees, but whose views are quite clear, then someone who doesn't act openly against the church but is also totally unpredictable and also quite vulgar."

In a special Nov. 10 commentary for the Polish church's KAI agency, George Weigel, senior fellow at the Ethics and Public Policy Center, said he hoped the U.S. Supreme Court would "better defend life and religious liberty" under a Trump presidency, adding that the greatest threat to Christian values was currently "the imperialist culture of Me."

"The 70 million-strong society of Catholics in the U.S. have various political views," Weigel told Polish Catholics. "But I hope most will expect from Donald Trump and his administration greater respect for the institution of the church, its role in society and its right to live in line with its understanding of itself than was shown it by the Obama administration."

The only unambiguously positive reactions to Trump's victory have so far come from Russia's predominant Orthodox church, whose leader, Patriarch Kirill, said in a Nov. 9 telegram he wished Trump "strength, God's help and success" in fulfilling American hopes for "change in domestic policy and international relations."

The patriarch, a close ally of Russian president Vladimir Putin, predicted Trump's experience from "many years' active, creative work" would help him "organize state and social life and co-operate with other countries."

He added that the U.S. and Russia were "joined by shared history and Christian values," and should cooperate "to counter extremism and terrorism, and defend the fundamental values and high moral ideals lying at the foundation of human rights and dignity."

Meanwhile, the Russian church's No. 2, Metropolitan Hilarion Alfeyev told Russia's Interfax news agency on Nov. 9 Trump's victory offered "hope for improving the entire system of international relations," adding that U.S. voters had accepted his criticism of the Obama administration for "giving up alliance relations with Russia."

"The Americans were essentially asked the following question: 'Do you want everything to stay as it was or do you want changes?' — and the American people voted for change," said the 50-year-old metropolitan, who heads the Russian church's foreign relations department.

"American policies in the Middle East, from the overthrow of Saddam Hussein to recent events in Syria, were shortsighted and wrong. By overthrowing regimes in countries one after another, allegedly in the name of democracy, America did not lead the region to democracy or prosperity. On the contrary, it provoked chaos, a mass exodus of civilians, and genocide of ethnic and religious minorities," he said.

However, Catholic Bishop Friedhelm Hofmann of Wurzburg in Germany said Nov. 10 he feared populist politicians would "continue their upheaval" following Trump's win, while Bishop Georg Batzing of Limburg said he was also "really worried" about the election's global consequences and concerned a Trump presidency would encourage countries to "close off against responsible international action."

Heiner Koch, the Catholic archbishop of Berlin, told a Reformation remembrance ceremony on Nov. 10 he hoped Christian parishes would become "better able to interact with people like Trump," rather than concluding "one can go no further with populists."

Meanwhile, the president of Germany's lay Catholic Union, Thomas Sternberg, said Trump had made "really repulsive remarks" about German Chancellor Angela Merkel and her country, adding that he too was "really deeply shocked" by the "incomprehensible" election outcome.

He added that he counted on the President-elect to be more conciliatory after both election candidates had "attacked each other in a most disgusting, insulting way," but said the prospect of "Trump and Putin going shoulder to shoulder" was "so terrible for Europe that one can hardly even imagine it."