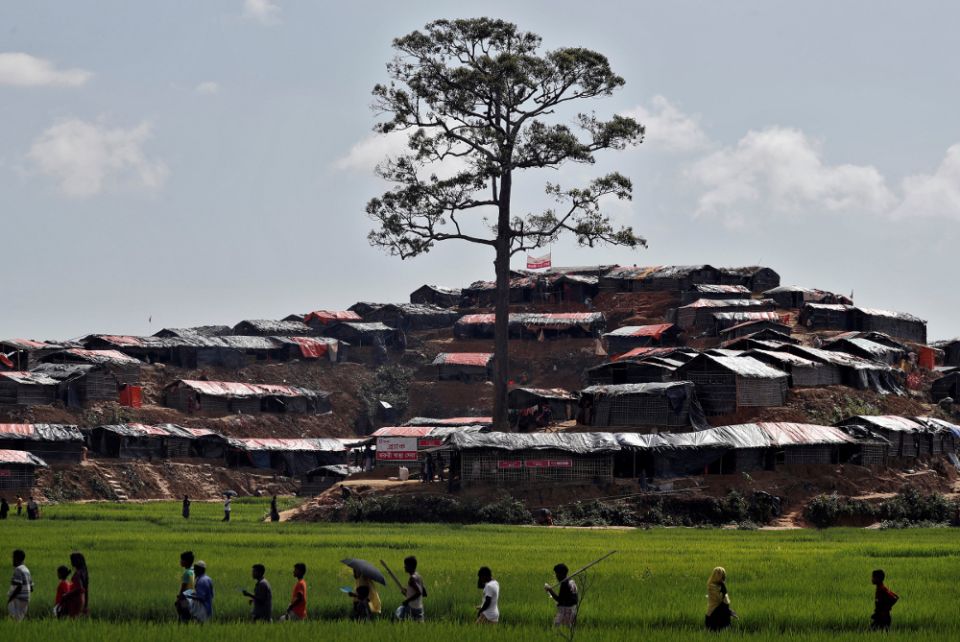 Rohingya refugees walk to a refugee camp in Cox's Bazar, Bangladesh, Sept 24. Faith groups are objecting to reports that the Trump administration will limit the number of refugees the United States accepts to 45,000 for the upcoming fiscal year. (CNS/Cathal McNaughton, Reuters)

Washington — The U.S. Catholic bishops and other faith groups are objecting to reports that the Trump administration will limit the number of refugees the United States accepts to 45,000 for the upcoming fiscal year.

It would be the lowest admission level for persons fleeing persecution that the U.S. has accepted since the executive branch was allowed to set the caps in 1980 under the Refugee Act, signed into law by President Jimmy Carter.

"We are disturbed and deeply disappointed by the proposed presidential determination number of 45,000," said Bishop Joe Vasquez of Austin, Texas, who is chairman of the U.S. Conference of Catholic Bishops' Committee on Migration.

"While the Catholic bishops, Catholic Charities, and Catholic communities across the country join in welcoming all of those refugees to American communities with joy and open arms, we are gravely concerned for the tens of thousands of extremely vulnerable refugees left behind by this decision," he said in a Sept. 29 statement.

"As I have stated before, this decision has very severe human consequences — people with faces, names, children and families are suffering and cannot safely or humanely remain where they are until the war and persecution in their countries of origin gets resolved," Vasquez said.

"These people include at-risk women and children; frightened youth; the elderly; those whose lives are threatened because of their religion, ethnicity or race; and refugees seeking family reunification with loved ones in the United States," he added.

Robinson said in a Sept. 27 statement that setting such a low goal "is a retreat from global leadership and undermines both our interests and our values. Our faith calls us to be compassionate, and this unprecedented policy is in direct opposition to the belief that we should welcome the stranger, especially the victims of war, terror and oppression."

The limit comes at a time when one in every 113 people in the world is facing displacement from their home country because of conflicts, according to the U.N. High Commissioner for Refugees, or UNHCR. Last year, the agency said 65 million people around the world suffered that type of displacement.

Vasquez said the U.S. Catholic bishops are urging the Trump administration "to welcome and resettle every one of the refugees eventually authorized" for fiscal year 2018. "Looking ahead, we strongly urge the administration next year to return to the level of resettling at least 75,000 refugees annually to the United States," he added. "We can and must do better."

Other faith groups, including the Lutheran Immigration and Refugee Service, the second-largest refugee resettlement agency in the U.S., said it was "profoundly disappointed" at the reduction.

When the Refugee Act of 1980 went into effect, the U.S. set the cap at over 231,000 refugees. Though it has declined steadily since then, the country has accepted between 70,000 to 80,000 displaced persons each year for almost two decades. President Barack Obama set the cap for fiscal year 2017 at 110,000 during his last year in the White House.

In his first executive order as president, Donald Trump set the cap at 50,000 and said any more than that "would be detrimental to the interests of the United States."

Just as they did then, many faith communities still disagree with the president.

"Churches and communities, employers and mayors are heartsick at the administration's callous and tragic decision to deny welcome to refugees most in need," said Linda Hartke, president and CEO of Lutheran Immigration and Refugee Service.

"We are not afraid of our new neighbors and are not fooled by cruel and false claims that refugees are a threat to our safety," she said Sept. 27. "The American legacy of welcoming refugees has made us stronger and better, and the government's own research proves that refugees bring economic benefit to our country through their hard work."

In his statement, Vasquez noted that "each refugee that comes to the United States is admitted through an extensive vetting system. Many of these refugees already have family in the United States, and most begin working immediately to rebuild their lives; in turn contributing to the strength and richness of our society.

"God has blessed our country with bounty and precious liberty," he continued, "and so we have great capacity to welcome those in such desperate need, while ensuring our nation's security."

Vasquez noted that on Sept. 27, when the Trump administration released its recommendation for the 45,000-cap on refugees, that same day Pope Francis "exhorted us to 'reach out, open your arms to migrants and refugees, share the journey.'"

At the Vatican, the pope launched the two-year "Share the Journey" campaign of Catholic charities around the world to promote encounters between people on the move and people living in the countries they are leaving, passing through or arriving in.

"We urge the administration to move past this period of intensified scrutiny and skepticism of the U.S. refugee program, which serves as an international model," Vasquez said. "This is a moment of opportunity to restore America's historic leadership as a refuge for those fleeing persecution."

In Chile and Peru, pope to see effects of Latin America's migration