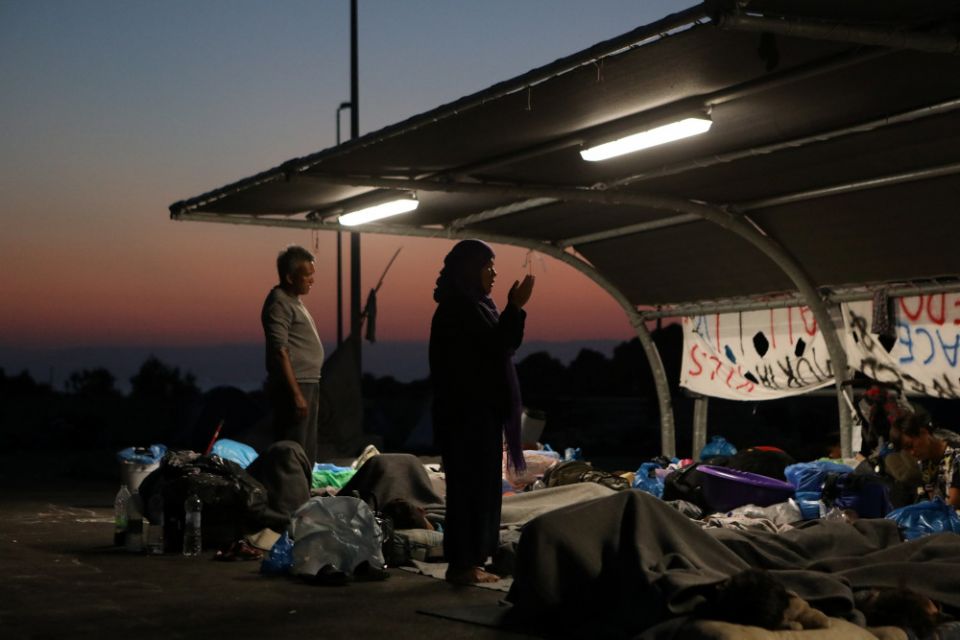 People displaced from the destroyed Moria refugee camp pray during sunrise in the parking lot of a supermarket on the Greek island of Lesbos Sept. 15, 2020. Even as the U.N. High Commissioner for Refugees pleaded this summer with countries to take in more of the 79.5 million displaced people worldwide, the United States, under the Trump administration, has consistently lowered each year the refugee cap. (CNS/Reuters/Elias Marcou)

Washington — U.S. organizations that work to resettle refugees fear that an upcoming battle with the Trump administration over the number of displaced people allowed into the country may be the fiercest yet.

Even as the U.N. High Commissioner for Refugees pleaded this summer with countries to take in more of the 79.5 million displaced people worldwide, the United States, under the Trump administration, has consistently lowered each year the refugee cap — the maximum number of displaced people the country decides to be resettled in a year.

Under previous administrations, the refugee cap had averaged around 95,000, with about 85,000 resettled annually in recent years through the Refugee Act of 1980, which created the Federal Refugee Resettlement Program.

For decades, many U.S. Catholic organizations, along with other faith groups, have taken part in helping some 3 million who have found refuge via the program as they fled wars, persecution or famine.

But future U.S. participation in that process is in question.

In a Sept. 10 press call hosted by Refugee Council USA, which included a panelist from Catholic Charities Dallas, a volunteer at a Catholic refugee resettlement agency, and Congresswoman Zoe Lofgren, among others, participants expressed worries about how the administration has chiseled away at the program and its possible demise if a second term of the Trump presidency comes to fruition.

"The administration has systematically reduced our commitment to resettling refugees," said Lofgren, a Democrat from California and chair of the House Subcommittee on Immigration and Citizenship. "The Trump administration, regrettably, has completely betrayed the spirit and the letter of the Refugee Act."

In 2019, the State Department said about the cap on numbers that it was focusing on "assisting refugees where they are concentrated," citing a "humanitarian and security crisis along the southern border that already imposes an extraordinary burden on the U.S. immigration system."

The long-standing refugee program, Lofgren said, made the United States "a beacon of hope for those fleeing terror, abuse, and brutal regimes," and, "it serves as a much-needed reminder of the compassion that our nation needs right now." 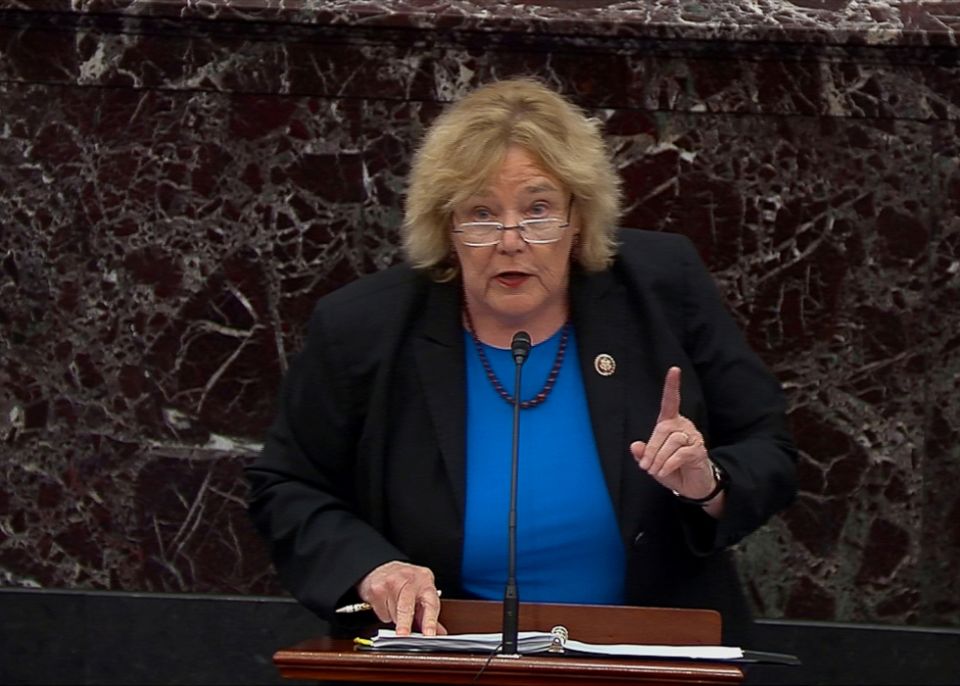 U.S. Rep. Zoe Lofgren, D-California, chair of the House Judiciary Subcommittee on Immigration and Citizenship, is seen Jan. 21, 2020, on Capitol Hill in Washington. In a Sept. 10 press call hosted by Refugee Council USA, Lofgren, among other participants, expressed worries about how the Trump administration has chiseled away at the U.S. refugee cap. (CNS/U.S. Senate TV via Reuters)

It helped panelist Sarah Soper, an Iraqi refugee, who now is a refugee resettlement specialist with Catholic Charities in Dallas. As long as she could remember, she said, she never "lived without a war" in her native Baghdad. She instead found a peaceful way of life when she came to the United States in 2013. She made the decision to leave after a traumatic event in Iraq.

"Because of the war, I lost my first child and that moment really changed all my life," she said.

It taught her that being a good person doesn't guarantee that something bad can't happen to you when you live a country in conflict, she said.

"In a war zone, you can witness and be a victim [of] any brutal action," she said during the Refugee Council USA panel.

Her brothers began working with the U.S. Army in the area as interpreters and she began helping nonprofits funded by UNICEF and UNESCO to help families in Iraq. Seeing that work was "the seed to start a new life in the United States," she said.

Because of the federal refugee program, they now have been in the U.S. for nearly eight years.

Getting a new chance at life, she decided to help others do the same through Catholic Charities, she said, the place that had helped her in her journey in a new country.

"The agency really took care of me," she said. "That moment when I started working to serve refugees, that was another moment which changed my life. I am in a position to share my personal experience with [refugees], to give them hope, besides the services."

But she watched that experience crumble for many others as the consequences of drastically reducing the refugee program meant fewer people would be coming through the doors of Catholic Charities.

"It wasn't easy in 2018 when they zeroed out my office, and we didn't have refugees anymore," because the Trump administration had reduced the number of people like her able to come in to the U.S., she said. "I cried my eyes out. I took it so personally because I really believe that every single human being in this earth deserves a safe land for himself, herself and for their children."

Panelist Steve Schrader, a retired U.S. Air Force pilot, who volunteered with Catholic Charities in southeastern Massachusetts, said he believes the refugee program serves the nation's security interests and "ideals, which are the heart and soul of this nation." 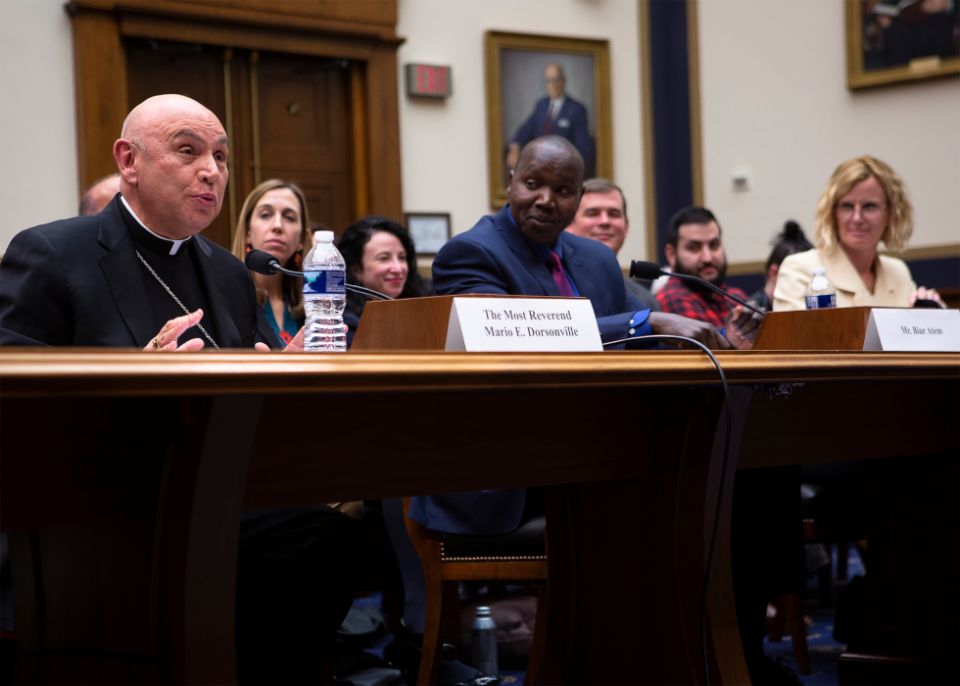 Auxiliary Bishop Mario E. Dorsonville of Washington, who is chairman of the U.S. bishops' migration committee, addresses the House Judiciary Subcommittee on Immigration and Citizenship in Washington Feb. 27, 2020. Also pictured are Biar Atem, a Nevada delegate to the Refugee Congress and a member of its board of directors, and Lora Ries, senior research fellow in homeland security at the Heritage Foundation. (CNS/Tyler Orsburn)

He spoke of working in other nations where contact with U.S. citizens and help in resettling those who needed to escape brutality wasn't just the right thing to do but also forged a positive image of the U.S. as a defender of the downtrodden.

He offered personal stories of those in places that had "extremism," and who were thankful to the U.S., for the sacrifices and the help provided to those seeking refuge.

The U.S. Conference of Catholic Bishops has continually called on the administration to allow more refugees into the country.

In the summer, Auxiliary Bishop Mario E. Dorsonville of Washington, chairman of the conference's Committee on Migration, joined in a statement put out by World Relief and Open Doors about the impact of changes to the nation's immigration and asylum policy.

"I pray our nation will reverse course and once again stand with refugees and asylum-seekers, including those escaping religious persecution," Dorsonville said. "Catholic and evangelical leaders have formally asked the administration to consider refugees fleeing persecution at this time."

The bishops' Migration and Refugee Services says it's called to defend those seeking shelter, keeping with Catholic Church teaching, and the organization fulfills the commitment of the U.S. Catholic bishops to protect the life and dignity of the human person, including those seeking asylum, refugees and other migrants.

But to those like Lofgren, those ideals are not in harmony with what the administration set out to do as it pertains to refugees.

"I think it's pretty clear that they had intended to destroy the refugee program," she said during the press call.

So far, the administration has not met with congressional leaders, as it must do by an Oct. 1 deadline, to carve out a plan for admissions, Lofgren said, which makes many worry the delays signals a lack of willingness to cooperate with the United Nations and the call to help.

"We can't afford to abandon our commitment to refugees at this time when there are more refugees and asylum-seekers and internally displaced persons today than at anytime since World War II," she said.